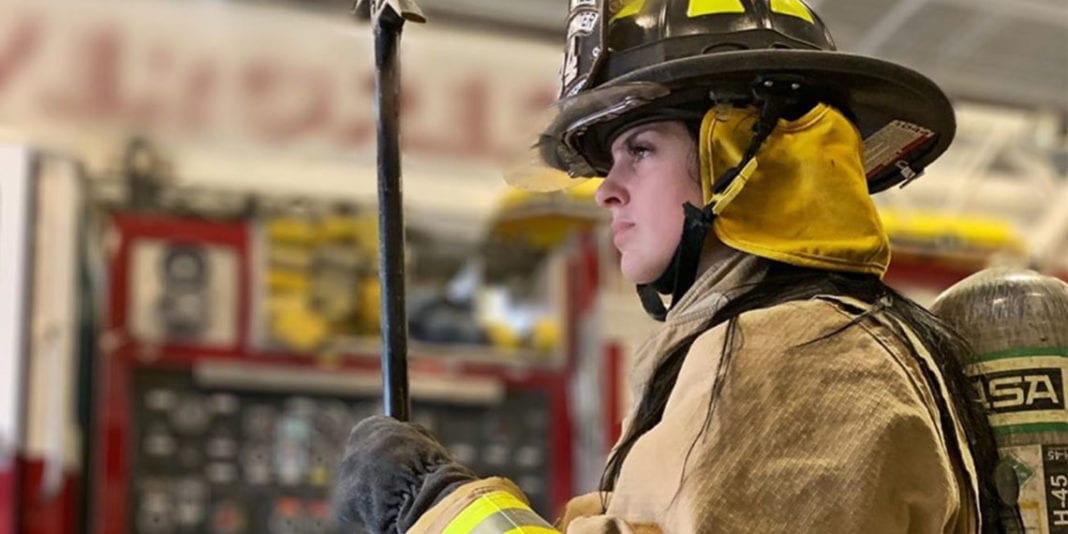 Another day, another story about an employer treating women badly. Sadly these stories are all too common—just in the last week, there’s been a sexual harassment lawsuit at Lisa Vanderpump’s foundation, an explosive New York Times report about sexual misconduct at Victoria’s Secret, and now, we have a story about a Montana woman who was fired from her job for her Instagram posts. Can we please just let women live?

The latest story in women’s unequal treatment in the workplaces comes from Presley Pritchard, who was employed as a part-time firefighter paramedic in Kalispell, Montana for nearly three years, until she was fired last August. In December, Pritchard filed a wrongful termination complaint with the fire department, and in an interview with VICE last week, she shared the details of the misogynistic attitudes that led to her firing.

For the first two years she worked at the fire department, Pritchard says she never had any issues, until July 2018. At that time, a department board member claimed a “concerned citizen” contacted him about Pritchard’s social media. I feel like real citizens should have other things to be concerned about, but ok. From then on, VICE says “she estimates she was reprimanded around 20 times for her social media content,” including what she wore to the gym and how she looked in her ACTUAL WORK UNIFORM. Apparently, someone complained that her standard-issue women’s firefighter pants (pictured below) were “too provocative,” so their solution was to have her wear men’s pants instead. To quote Pritchard: “Am I supposed to leave my butt at home?”

My face when someone mentions how I’m “provocative” in professional attire 🤣 – This post is for all the ladies out there making a difference, doing their jobs day in & day out. – Have you ever been asked why you wear makeup in uniform? Or why you brush your hair and care how it looks? Or why you tighten your pants “too tight.” Or been told that you are too “manly,” “too skinny,” “too small,” or “you’re provocative” because of your curves or way you look that you can’t help? – If you’re a female in this field, especially an attractive or curvy girl, you’re GOING TO be ridiculed. You’re going to be mocked, made fun of, talked about poorly, judged by looks. – Here’s the thing; when you genuinely love yourself and others and what you’re doing while radiating the love of Jesus & walking in your calling, the enemy WILL try to knock you down. Did you know the enemy only attacks things of value? He sees you walking in God’s calling for your life, helping and inspiring others, and he will do EVERYTHING in his power to prevent you, stop you, discourage you, and talk you out of things meant for you. He does this through words, judgmental unbelievers, temptation; the devil has a bag of tricks up his sleeve. Don’t give in. Don’t be discouraged. Don’t throw in the towel. Darkness cannot drive out darkness, only light can. So be a light to others. Keep shining. Keep doing you. Keep staying in your lane, inspiring, and making a difference. . . . . . #firefighter #firefighterworkouts #sweaty #ems #firefighterfitness #firefighterworkout #fitfirefighter #femalefirefighter #thinredline #fitfemalefirefighter #paramedic #fitforduty #womeninuniform #functionaltraining #medic #firstresponder #firedepartment #onduty #fitnessmotivation #mediclife #functionalfitness

In addition to her former work as a firefighter, Pritchard is also a fitness influencer, and she has over 100,000 followers on Instagram.   As you would expect, her content on Insta is a mix of informational workout posts, sponsored posts for products like protein shakes and organic snacks, and posts about her personal life. During her time as a firefighter, she posted lots of pictures in uniform or at work, but those were never sponsored posts, or even particularly racy. But after the initial complaint, she says she began to get reprimanded for posting photos in her uniform at all.

If your employer doesn’t want you posting about your job on social media, fine. But the problem with this specific case? Her male colleagues were posting uniform pics all the time! And, surprise surprise, they were shirtless in a lot of them—definitely more provocative than the work pics that Presley was posting. Along with screenshots of these posts, Pritchard also told VICE that a male coworker wasn’t reprimanded for claiming on Instagram that the Sandy Hook shooting was fake, so like, this place had inconsistent standards for what their employees should or shouldn’t post on social media.

I have gotten comments on photos in uniform about how my butt looks and about the fact I’m wearing makeup on shift so I must be “incompetent at my job.” About how I care how my hair looks to be presentable when I’m taking care of someone’s dying family member.. I scroll through friend’s photos in uniform or holding guns and men automatically assume that they’re less than capable because they also like to dress up or have their nails done. – Since speaking up about this, I find that many of you women have similar stories. I’ve always been one to speak up about sexual harassment and assault in the workplace. Unfortunately, it is all too common in male-dominated fields. You’re not a victim for sharing your story. You are a survivor setting the world on fire with your truth. And you never know who needs your light, your warmth, and raging courage. I’m not afraid because I trust that God has worked through me and used my pain as a microphone to help others. – Sometimes people try to destroy you, precisely because they recognize your power – not because they don’t see it, but because they see it and don’t want it to exist. – Remember, people who repeatedly attack your confidence and self-esteem are quite aware of your potential, even if you are not. . . . . . . . . . . DM for coaching inquiries @1upnutrition || code: presleykp @ninelineapparel || code: presleykp @herbstrong || code: presley15 @warriorflask || code: presleykp @freskincare || code: Presley #firefighters #firefighter #femalefirefighter #firechicks #strongwomen #blessed #doboth #bomberos #uniformedwomen #metoo #functionalfitness #thinredline #curvesncombatboots #speakup #womeninuniform #feminism

But could anything make this situation worse? Yup! Pritchard claims that she actually got advance permission to post most of her pictures in uniform, but then the higher-ups at the department still used those pictures against her. Wow, these people are terrible. When she was ultimately fired in August 2019, the official reason given was that she failed to take down Instagram posts showing her in uniform—the same posts she says she got approved by the department. The department had given her five days to remove the posts, but per the advice of a lawyer, she chose to leave them up, because the department lacked “a standard social media policy.”

Aaaaand to further confirm that the people who fired Pritchard are trash, they tried to lie to stop her from receiving unemployment benefits. They claimed that she was using her job at the fire department to make money on Instagram, even though this literally isn’t true. According to Pritchard, she was careful to only agree to sponsored posts that were separate from her firefighter job, and said, “I’d be freaking rich if I made money from every post… They probably should have looked into how social media works before they say that, because it just makes them look really, really, really stupid.” Yeah, I have a feeling they’re going to look pretty dumb in court if all of this is true.

At the end of the day, Presley Pritchard was f*cked over by the same sexist attitudes and double standards that affect so many women in the workplace. And, like many toxic industries, firefighting appears to be a boys’ club. A recent study by the National Fire Protection Association showed that only 7% of firefighters in the US are women, and that number drops to 4% when you don’t include volunteers. With numbers like that, it’s no surprise that this fire department was not exactly a supportive environment for women.

This isn’t the first time we’ve seen a woman be mistreated by an employer, or potential employer, for social media posts, and sadly, it probably won’t be the last. Certainly, the relationship between social media and the workplace can cause valid issues, but in this instance, it really doesn’t seem like Presley Pritchard did anything to warrant such a harsh reaction, or any negative reaction at all. On the contrary, she worked hard to establish her Instagram presence as a way to make some extra income, and it appears that she was extra careful to make sure this didn’t interfere with her work as a firefighter. She told VICE that, in almost three years, she had “never, ever once been talked to about [her] actual job,” and it sounds like the men in charge were just looking for an issue with her. Hopefully, Pritchard’s lawsuit will expose what happened, and make another step toward ending this type of gender-based discrimination in the workplace and in our society in general.