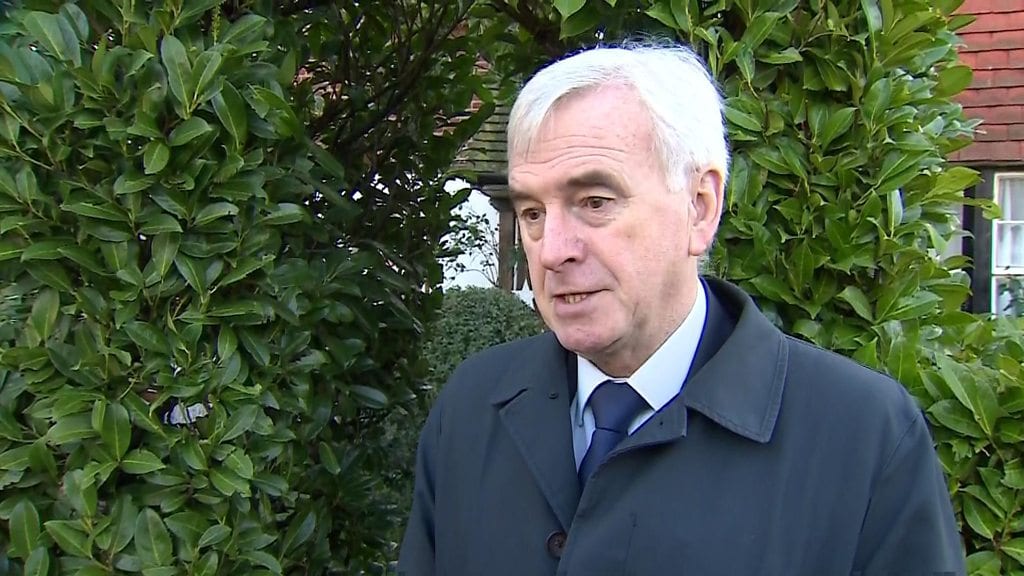 Labour needs to carry out a “mammoth listening exercise” to address criticisms from its own MPs, says the shadow chancellor.

John McDonnell had called for the seven MPs who resigned from Labour on Monday to face by-elections for their seats.

But speaking on Tuesday, he focused on “finding a way forward” and the need to “bring people in [and] talk to them.”

Jeremy Corbyn was “disappointed” MPs had left, but defended his polices as having “huge public support”.

The reactions followed warnings that more Labour MPs could quit the party to join the new group of independent MPs.

The BBC has also been told two Conservative MPs are thinking of joining the group in Parliament.

The seven Labour defectors – Chuka Umunna, Luciana Berger, Chris Leslie, Angela Smith, Mike Gapes, Gavin Shuker and Ann Coffey – quit the party in protest at what they said was a culture of “bullying and bigotry” in the party and frustration over the leadership’s reluctance to back another EU referendum.

Mr Umunna told BBC Radio 4’s Today programme that they also believed Mr Corbyn could not be trusted with national security, if he became prime minister.

Others could follow, with Labour MP Ian Austin telling BBC West Midlands: “I’m thinking about this, as lots of people are.”

Labour’s deputy leader, Tom Watson, said it was “a moment for regret and reflection, not for a mood of anger or a tone of triumph”, and time for the party to “broaden out so that all the members of our broad church feel welcome in our congregation”.

The Parliamentary Labour Party (PLP) had a “heated” and “tense” meeting on Monday night, with one MP telling the BBC there was an abject failure of leadership and “no emotional intelligence was shown”.

Speaking on Tuesday morning, Mr McDonnell said people had been “very straightforward” at the PLP meeting.

He said: “I think we need a mammoth, massive listening exercise and to address some of those criticisms that have been made. I think we are finding a way forward, but it has got to be on the basis of taking the advice of people like Tom Watson, the PLP and others.

Mr McDonnell also said he was “really disappointed” at the seven resignations, adding: “I don’t understand why they’ve gone, I still can’t understand it. All the issues that they’ve raised, we are addressing and I would have rather they’d stayed with us and helped us sort those problems out than walk away.”

‘I want our party to be strong’

Labour leader Mr Corbyn did not avoid the topic when appearing at the MAKE manufacturers conference in London on Tuesday.

During his speech about Labour proposals to create jobs, he said: “These policies won huge public support at the general election only 18 months ago, so I am disappointed that a small number of MPs decided to take a different path.

“But this is an agenda that unites half a million Labour Party members, inside and outside Parliament, along with millions of people across this country.”

Pushed further by the BBC’s deputy political editor, John Pienaar, during a Q&A, he added: “I regret that seven MPs decided that they would no longer remain part of the Labour Party. I thank them for their work.

Mr Umunna told Today that the new group was not yet a new political party, but he believed it could become one in time.

He urged members from all parties to join them in building an “alternative” to the current two party system, which he said was “fundamentally broken”.

When asked who the two Tory MPs considering joining their ranks could be, he refused to speculate, but added: “There are a lot of Labour MPs wrestling with their conscience on this issue but also Conservatives who have become demoralised by the UKIPisation, if you like, of the Conservative Party.”

A number of Conservative MPs are at the centre of rumours about joining the new group, including Sarah Wollaston, a supporter of the People’s Vote campaign for another EU referendum.

On Monday evening, she tweeted: “#BLUKIP has been busy taking over the Tory Party alongside the ERG. Soon there will be nothing left at all to appeal to moderate centre ground voters.”

Other Conservative MPs unhappy with the party’s direction include Anna Soubry, another People’s Vote supporter, who has called in the past for a new centre party.

For now though that is way off. And this is first and foremost about the Labour Party – the seeds of the splinter sown more than three years ago, bearing bitter fruit just when Parliament’s biggest decisions over Brexit are about to be made.

Former shadow environment secretary Mary Creagh told Today: “I have [been approached] and I’ve said no. I think what is important is we now take a long hard look at ourselves as a political party.”

Labour MP Jess Phillips, writing in the Daily Telegraph, called on Mr Corbyn to listen to why the MPs had quit and “act on it”, warning that reacting with bitterness could cause the party to “burst apart”.

However, shadow foreign secretary Emily Thornberry told the Daily Mirror that the resignations were a “distracting and divisive exercise”.

Facebook is hiring moderators. But is the job too gruesome to handle?