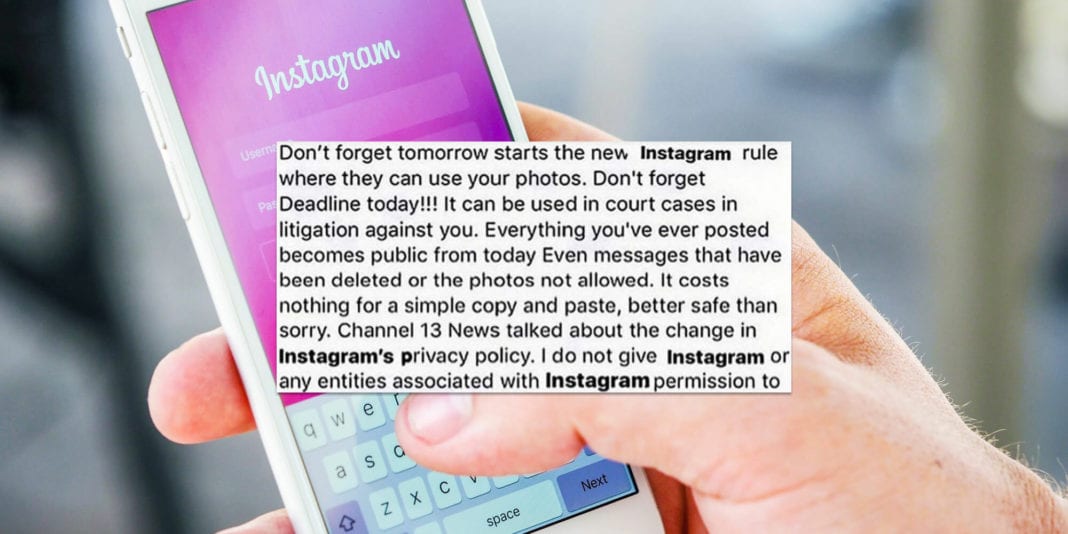 This isn’t the first time this hoax has gone viral. In fact, the post is nearly identical to several others that have surfaced over the past several years.

So where do these posts come from and why do people keep falling for them?

This week’s hoax makes numerous absurd claims about how Facebook and Instagram will soon be reviving users’ deleted photos and messages and how that data can be used against them in court.

“Don’t forget tomorrow starts the new Instagram rule where they can use your photos,” the typo-ridden message begins. “Don’t forget Deadline today!!!! It can be used in court cases in litigation against you.”

While the message may come off as obviously fake to most, the hoax was able to convince a significant amount of people, including high-profile government officials and celebrities.

Everyone from United States Secretary of Energy Rick Perry to Hollywood actors Rob Lowe and Julia Roberts shared the post. Famed musicians such as Usher and Waka Flocka Flame are said to have fallen for it as well.

Despite this post making the rounds, all it takes is a quick reading of Instagram’s terms of service to clear things up. Instagram’s terms specifically note that the company does “not claim ownership of your content,” but that users “grant us a license to use it” when signing up.

“There’s no truth to this post,” the spokesperson said.

Where did the hoax come from?

Although internet hoaxes are as old as the internet itself, this latest iteration appears to have first appeared in 2012.

An article from fact-checking website Snopes at the time cites the exact message that has been circulating on Facebook and Instagram this week. Facebook even issued a statement in 2012 urging users not to fall for such claims.

“There is a rumor circulating that Facebook is making a change related to ownership of users’ information or the content they post to the site. This is false,” the company said.

Why do people keep falling for it?

So if this hoax has been repeatedly debunked over the last seven years, why do people keep falling for it? The easy answer: Billions of people use the internet and there’s no way for everyone to know what’s already made the rounds, or what looks legitimate and what does not.

On a more human level, the hoax also states exactly what the people posting it are feeling: “Better safe than sorry.” It seems many internet users would rather take the risk of looking foolish than to have their data potentially exposed. And given the state of user privacy, who can blame them?

The True History of ‘Yanny’ and ‘Laurel’

Robots Can’t Hold Stuff Very Well, But You Can Help