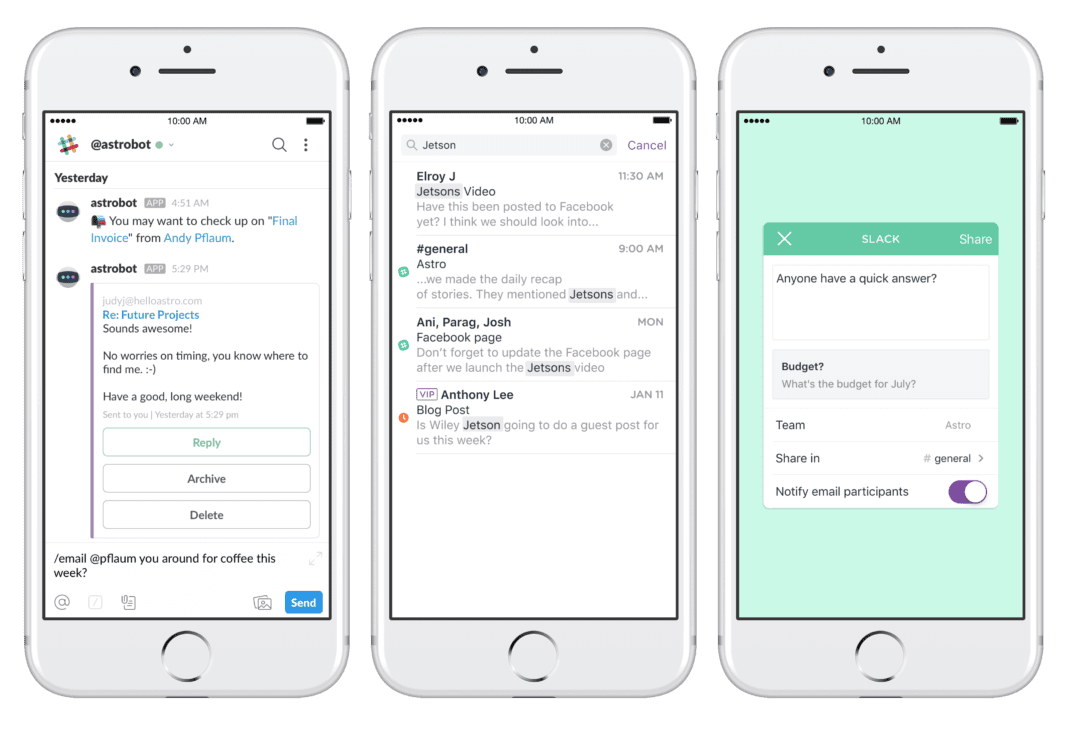 Astro is today rolling out a new bot that merges Slack and email. The bot will allow you to receive your most critical emails within Slack, write and respond to emails using Slack usernames, as well as share important emails and their attachments into Slack private messages or channels, among other things.

The bot is an expansion on Astros previously launched email platform that leverages A.I. to help users make better sense of their inbox, triage their emails, and make sure that they dont miss their priority messages.

In addition to the Slack integration, Astro is also today launching an Alexa Skill for checking in on your important emails and responding by voice.

While it may seem as though theres never an end to the number of startups trying to solve our problems with email, thats because email continues to be an ongoing problem for many users.

Astro CEO Andy Pflaum, who sold his prior productivity-focused company Zimbra to Yahoo, brought many of the founding team members at Zimbra over to his new company.

We felt that workplace communication is an area that still needs a lot of improvement, explains Pflaum. Even with the rise of Slack in particular and real-time group chat in generalwe felt that there were still problems, particularly in email, he says.

The approach the team wanted to take was applying modern-day A.I. technology to help address the remaining issues with email.

The company already has email apps that work across the desktop and mobile which include a helpful bot Astrobot that can uncover insights, take actions on your email, and surface other cant miss items from your inbox.

For example, the bot knows when theres an email from someone important whos still awaiting your response to a question they asked; it can ask you if youd like it to unsubscribe you from a newsletter you never open; and it can help you with other items not directly related to emails like helping you figure out who you know at a given company, or reminding you of tasks.

Astros email apps also have a bevy of other advanced features like snoozing emails, tracking opens, reminding you to follow up with people who havent replied, as well as inbox cleanup features that can help you declutter, and more.

With the new Slack integration, the idea is to bring some of Astros smarts over to another platform where a lot of workplace communication has now shifted.

You dont have use Astros email apps to use its Slack bot, though of course the company hopes this will entice you to try its full platform.

After adding the bot to Slack, you can configure it to alert you Priority emails those that Astro determines you want to read based on a number of signals, like whether you tend to open emails from this sender, reply, or and more. That way, even if you spend the majority of your day communicating with coworkers in Slack, you wont miss your most important emails.

From Slack, you can also reply, archive, delete, snooze or star your emails, as well as send out quick emails or set reminders using the /email command. You can also clean up your inbox with the /zap command so the next time you open your inbox, all your older messages have been archived.

Plus, Astrobots insights will also alert you to unanswered questions and other items you shouldnt miss, as well as those messages from contacts youve designed as a VIP.

Above: Astro in Slack

Because email often has sensitive information, the Slack bot is designed to only work within either a Direct Message or private channel in Slack.

Meanwhile, you can now share emails and files back to Slack from Astros mail clients, if you choose to use them. Here, you can add a note about the email being shared so your team knows why youre posting it, as well as post the emails attachments.

The advantage of using Astros full platform is that, with the Slack integration, youre now able to search across both Slack and email at the same time.

Above: universal search across email and Slack

Were providing what we think are simple but deep and also very useful ways for a user to manage their email without having to leave Slack, saysPflaum.

The company has also today launched its bot on Alexa, which lets you catch up, manage, and reply to emails by voice.

This is not as immediately useful as the Slack integration, except for those who have an Alexa device in their home, and for some reason need to check on their emails hands-free for a time. (Perhaps it could be handy when waiting on a critical reply instead of refreshing your inbox obsessively, you could just go ahead and cook dinner and ask Alexa instead to check your messages for you.)

However, as Alexa becomes more portable built into new smartphones, for example, or cars Astros Alexa Skill could be a means of staying on top of email while on the go.

Both the Slack and Alexa bots are live today, and available for free to all users. Astro plans to generate revenue through premium tiers for teams and enterprise arriving later this year, and the next.

The startup, based in Palo Alto, previously raised $8 million in Series A funding from Redpoint, Aspect Ventures, Harrison Metal and Upside Partnership.

Apple patent shows Siri inside iMessage to help with scheduling, payments and more