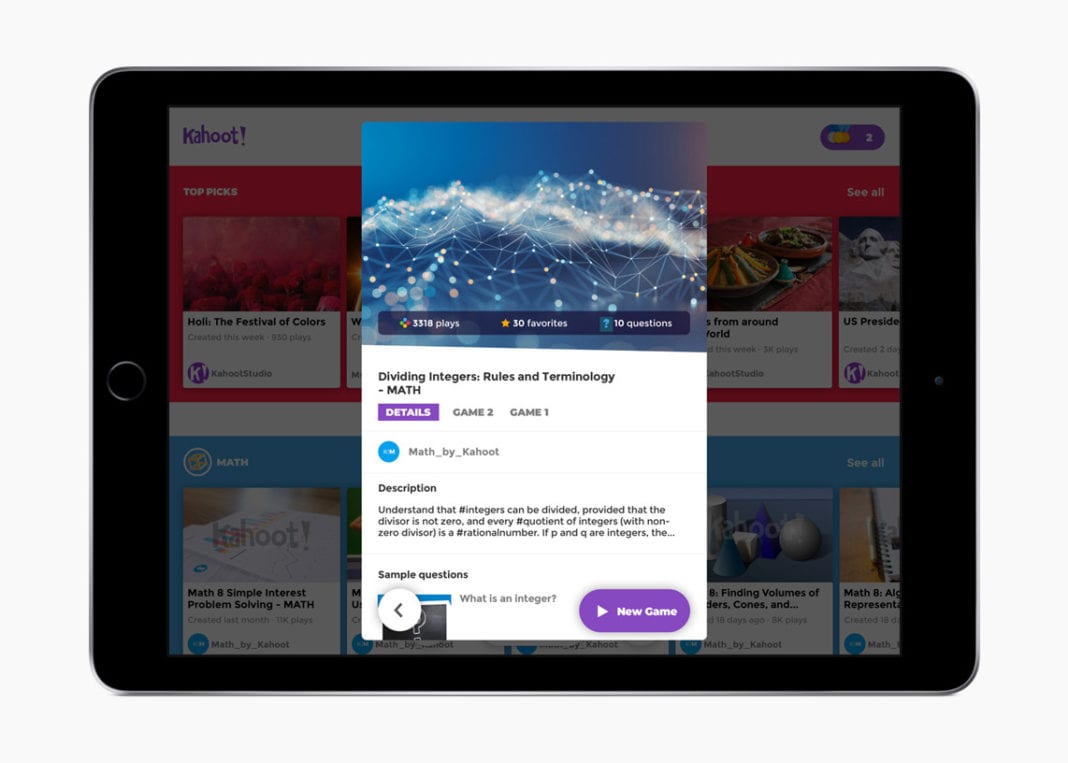 When Kahoot, the startup that operates a popular platform for user-generated educational gaming, raised $15 million in October of this year, we mentioned that Disney had a stake in the company by way of the Disney Accelerator, and it had an option to become a larger shareholder if it exercised its warrants.

Now with some 60 million games on its platform, today Kahoot announced that this has come to pass: Disney is taking that option, working out to a four percent stake in the startup at a $376 million valuation, based on the current share price of 28 Norwegian kroner (shares of Kahoot are traded on the Norway OTC as an unlisted stock). It makes Disney’s stake in the app worth about $15 million, although the actual value of the warrants Disney is exercising is smaller than this.

Kahoot declined to comment for this story beyond the investment announcement posted on the exchange, but for some context, this is a nice bump up in Kahoot’s valuation from October, when it was at $300 million. Other sizeable and notable investors in the company include Microsoft and Nordic investor Northzone (which has backed Spotify and other significant startups out of the region).

On the part of Disney, it’s not clear yet whether its Kahoot stake will lead to more Disney content on the platform, or if this is more of an arm’s length financial backing. The two have already put Lucasfilm content on Kahoot and there may be more to come. The entertainment giant has made nearly 50 investments by way of its accelerator program. In some cases, it increases those to more significant holdings, as it has in the case of HQ Trivia, Sphero, Epic Games (the company behind Fortnite, a very different take on gaming compared to Kahoot), Samba TV and more.

Disney has been dabbling in both gaming and education as vehicles to market its many brands, and also as salient businesses of their own — no surprise, given that one primary focus for it has been on younger consumers and their needs and interests.

In some cases, it seems it may use strategic investments to do this, for example with Disney-themed nights on HQ Trivia. Interestingly, although it doesn’t appear that Disney invests in the Indian educational app Byju’s — which itself just raised $300 million — the educational app, which has been described as “Disneyesque,” teamed up with Disney in October to develop co-branded educational content, another sign of Disney’s interest in the field.

Kahoot has been around in one form or another since 2006 — originally as a gamified education concept called Lecture Quiz before launching as Kahoot in 2013 — but has seen a sharp rise in users in the last few years on the back of strong growth in the U.S. — benefiting from a wider trend of educators creating content on mediums and platforms that they know students already use and love.

Kahoot’s last reported user numbers come from January, when it said it had 70 million registrations, but its CEO and co-founder Åsmund Furuseth told TechCrunch in October that it was on track to pass 100 million by this month. Kahoot didn’t release updated figures today, but my guess is that Kahoot has hit its target (maybe even passed it), and that is one reason Disney decided to exercise its investment option.

Kahoot is not your average gaming company: some games are created in-house, but the majority of them are user-generated — “Kahoots” in the company’s parlance — created by the people setting the learning tasks or those trying to create a more entertaining way of remembering or learning something. These, in turn, become games that potentially anyone can use to learn something (hence the name).

There have been about 60 million of these games created to date, a pretty massive amount considering this is educational content at the end of the day.

Kahoot has developed its business along two avenues, with games for K-12 students and games for business users, building training and other professional development in a wrapper of gamification to engage workers more in the content.

In practice, about half the games in Kahoot’s catalogue are available to the public and half are private, with the split roughly following the company’s business model: games made for corporate purposes tend to be kept private, while the educational ones tend to be made publicly available. The business model also follows that split, with Kahoot’s business users accounting for the majority of its revenue, too.

Updated with more clarification on the investment.

Meet the woman creating the Facebook Live of sex ed