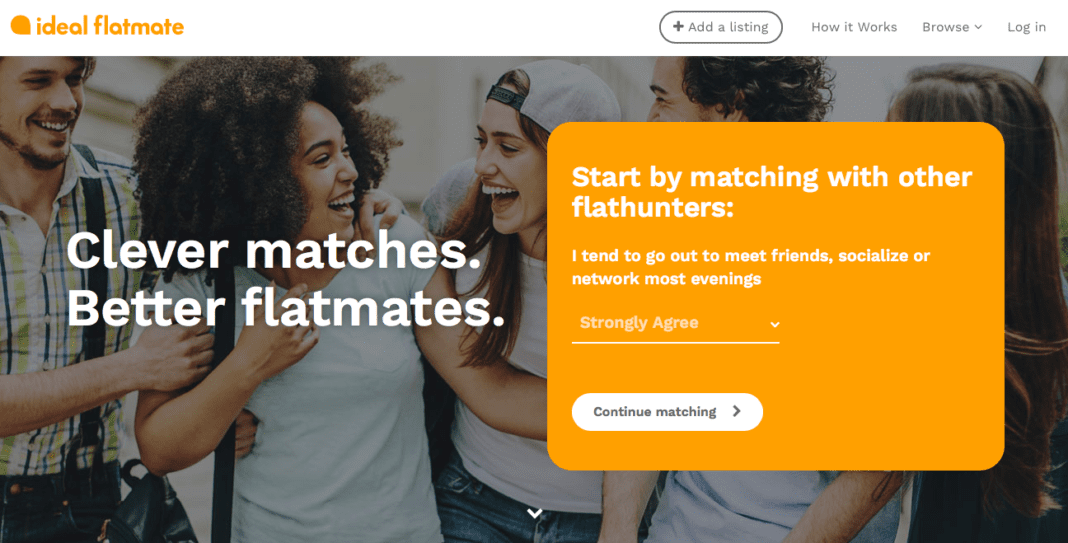 Londoners in the unfun position of needing to find a newflatmate and lacking the easyoptions of friends or family to move in with can get a little algorithmic help froma UK startup withthe no-frills name of Ideal Flatmate.

The startup is applying dating-style personality matchmaking to try to makeit easier for strangersto locate acompatible house companion. Users are asked to take an on-site survey,responding to a series of statementswith ascaled response (from strongly agree to strongly disagree), in order to bematched with potentially compatible flatmates.

There are already a few US startups offering algorithmic roommate matching platforms, such as college student-focused platformroomsurf, but Ideal Flatmate is claiming to be the first to market in the UK. Its also not limited to students, though it is limited to London flatshares for now though the plan is to expand nationwide in the UK this year.

Itsoft launched its website last October but is officially launching now with some 3,000 registered users at this nascentstage, 1,000 listed properties, and a total of around 30,000 unique visitors so far.

Development has beenfunded by thefounders and a couple of unnamed private investors. Were looking to run a further round of funding later in the year, says co-founder Tom Gatzen.

Given that more than half of the 20-39 age group is projected to be renting privately by 2025, the market is growing significantly, he adds.

Its certainly true that over the past decadea growing proportion of UK householdshave been renting vs owning their own homes socioeconomicshift thats sometimes badged with the label:Generation Rent a trend driven byvarious factors such as steeply rising house prices asdemand for housing has outstripped supply.

There have been a mix of flathunters using the site and landlords uploading their properties, saysGatzen, discussing who the typical user is thus far. The highest proportion of users are in the 20-35 bracket but there are also a significant number of 40+ flathunters, indicative of the growing number of this age range living in shared rental accommodation as a result of societal changes.

The sites matchmaking survey covers areas that can betypical flashpoints for domestic harmony,such as socializinghabits and attitudes to cleanliness. But its also probinga little deeper on thepersonality front, with questions that look to identify how extroverted or introverted a personis and match usersaccordingly. It has worked with two psychologists from the University of Cambridge to help develop thesurvey.

We ran market research on over 500 flatsharers asking them 100 questions which we felt were the most relevant in working out whether you are compatible flatmates.After running a factor analysis with our Cambridge professors and testing the answers we received, the 20 questions we have were found to be the most important.

Its clearly too early for the team to be able to stand up their matchmaking approach with any firmdata provingeffectiveness, butGatzen claimsanecdotal feedback so far looks positive with userssaying theyfeel theyre getting matched to like-minded people.

A key part of our progression will be around fine-tuning and testing the matching to ensure people are getting paired up with suitable flatmates, he adds.

Despite it being early days, the team is not taking its timeto start bookingrevenue, launching paid options in recent weeks but then flathunting istypically aproblem with a very limitedlifespan. People might be content to go on dates for years and years, but most sane people dont want to be stuck in living limbo for more than a month or two at most.

Add to thatmost London flatshares have a 12 month contract attached to them, so the revenue opportunities here are widely spaced too. Even factoring in Generation Rent this is not a dating-sized market opportunity, by any means.

So while its free to browse Ideal Flatmatethe ability to contact potential flatmates requires users to stump up for asubscription. Pricing starts at4.99 for a weeks access for which they get deliveredmatches with the most compatible potential flatmates and properties for their criteria (so location, budget and personality).

They alsoget access to the on-site messaging feature so matchedusers/groups of users can start to chat to see whether they want to meet in person totalk abouta possible flatshare.

A second strand of the monetizing strategy will also launch soon, withGatzen saying they willstart charging landlords and letting agents a fee to advertise on the site this spring.

The startups balancing act looks as ifit willbe not discouraging the quantity of users it needs to be able to deliver enough relevant/quality matches for its target flatseekers and landlords to consider it a service worth paying for riskinglimiting its potentialto grow large enough to generate enough revenues to be sustainable beyond the short term.

Why it’s so hard to give up ridesharing

10 Great Things That Happen When You Set Boundaries