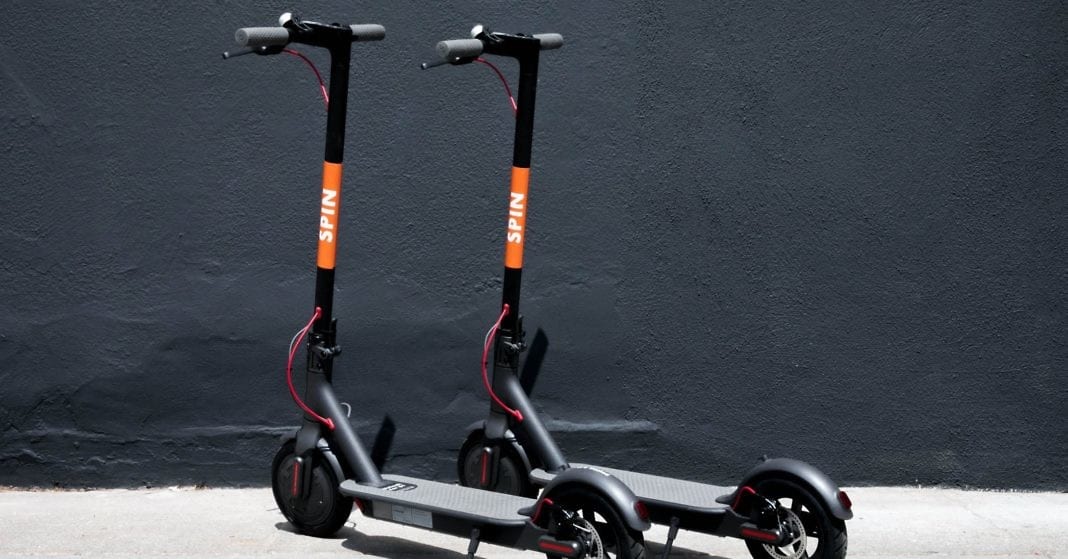 Way back in December 2016, a couple of Silicon Valley veterans, inspired by the success of dockless bike-share companies in China, launched a startup called Spin. A transportation revolution was coming, they predicted. Traffic-weary urbanites would ditch their cars for easy pick-up, easy drop-off, fun-to-ride vehicles. Time to bring the whole thing stateside.

Except Americans, it turns out, want some zip. They want to go fast, but they don’t want to, well, exercise too much. So just 17 months on, San Francisco-based Spin has ditched bikes for something even better. Something way more popular. Something it thinks will be not just easier, but more profitable.

“We’re focusing primarily on electric scooters,” says Spin co-founder and president Euwyn Poon, as he sits in a cluttered office in San Francisco’s techy Soma district, surrounded by computers, employees, the startup's signature swipes of orange, and scooters. “The statistics are insanely high.”

Despite official pushback, impoundings, and plenty of grumbling, the people of San Francisco, Austin, and Santa Monica, California have fallen—hard—for the battery-powered two-wheelers. Spin has seen a 61 percent day over day increase in rides since it launched in San Francisco in mid-March. Sure, some scooters have ended up in trees and at the bottom of the San Francisco Bay. (The company says it’s losing more than 2.5 percent of its total scooter population per month.) But each one gets four to five rides per day, at $3 to $4 dollars a pop, and costs less than $500. Every scooter that survives a month or so pays itself off. Scale will only make the economics groovier.

And scale is the goal. The two other companies in SF, scrapping for market share, have also seen nice-looking advances. Venice-based Bird, with $115 million in funding and over 1,600 scooters in San Francisco, gave more than 95,000 rides to 32,000 different people in just its first 30 days of service in the city. LimeBike has more than 200 scooters in San Francisco—it won’t get more specific than that—but would like to have many, many more. “We don’t have enough scooters,” says Jack Song, the company’s head of marketing and partnerships. “It’s not been enough.”

The scooters are a hit because they make it easier to get around places where congestion renders driving a horror show, and public transit service is falling behind. They don’t get stuck in traffic—or add to it. They obviate the need to pay to park a personal car, or lug around a personal bicycle (or scooter). Using them won't make you sweat. They cost a few bucks to ride and can hit 15 mph. You can leave them wherever you like. They are perfectly convenient and correspondingly popular.

For these scoot schemes to work, the vehicles must be plentiful, easy to find, and in good condition. So far, the companies have fielded complaints from riders who can’t score a ride when they want it, or reserve a scooter only to find it broken, uncharged, smeared with feces, or gone. (Hint: Check nearby trees.)

This creates a lot of actual, physical work for the startups, who can’t pretend they’re just tech platforms. Remember: Uber has never had to fuel, park, or clean cars. Its “driver partners” do all that. Spin, Bird, and Limebike need humans out on the streets, charging, maintaining, and distributing the scooters, ensuring they’re in the right places at the right rush hours.

So far, the startups have relied partly on the gig economy. Each has a program offering residents $5 to $10 to charge scooters in their homes overnight, and set them in on designated sidewalks in the morning.

They also need actual employees on the ground with local knowledge, able to pick up, charge, or deploy scooters as demand demands. (It helps here that e-scooters are smaller than e-bikes, and easier to move). Spin has 60 to 80 contract workers, depending on the season. It’s one thing to scale up scooters. Doing it with a workforce is trickier.

Another potential minefield is insurance. E-scooters are arguably easier to ride than bikes, with less of a learning curve. (California still requires e-scooter riders to have a driver’s license.) But they’re not quite as stable, and wearing a helmet—though legally mandated in the Golden State—doesn't come naturally to most.

“As the speeds increase and they get more powerful, the small wheeled scooters are more susceptible to a crack or a bump or a curb than an e-bike,” says Karl Ulrich, the vice dean of entrepreneurship and innovation at the the Wharton School of the University of Pennsylvania, who co-founded the scooter company Xootr in the early 2000's. He worries the insurance bills for this companies might get excessive.

Then there’s the government. In San Francisco, which is creating a specialized permitting program for e-scooter-share, officials want to cap the number of vehicles each outfit can deploy. That’s a major problem for small companies racing to get bigger and turn a profit. “The cap would come in and potentially interfere with scaling benefits,” says Susan Shaheen, a civil engineer who researches mobility companies at UC Berkeley.

Government also holds the purse strings for infrastructure—and e-scooter companies have been stymied by a scarcity of places to safely ride. In California and Washington, DC, the law says riders must pilot motorized scooters in the street, but a reasonable fear of being mowed down by a car pushes many onto the sidewalk. Given that space there is already limited, a constellation of senior, pedestrian, and neighborhood groups have organized to beat them back. That’s an important voting bloc, with which e-scooters will have to contend.

Of course, some of the city animus is e-scooters’ fault. These companies appear to have patterned at least some of their approach to the transportation market on a ride-hail companies, which burst into city markets without the express permissions of slow-moving bodies like taxi commissions and local transportation departments. (Spin says it was in talks with San Francisco prior to its launch.) Like Uber and Lyft, these companies are scrapping for market share, which makes them more willing to ignore rules that hold them back. That approach (mostly) worked out for ride-hailing. It may not for “micromobility.” Because Spin, Bird, and Limebike have actual vehicles to care for, which they store in the public right of way, they’re more susceptible to government intervention.

So despite near-shocking growth and surging popularity, it’s possible, still, that these companies will run into trouble. But it’s hard to imagine electric personal vehicles going away. People like an easy, no-sweat way to move. “The thing that we’re seeing is small electric vehicles in this last-mile usage is the trend line, not the scooters specially,” says Reilly Brennan, a partner at the transportation-focused venture firm Trucks. For now, though, they do seem to love the scooters.

Time To Ditch Our Cars and Start Riding Cargo Bikes

Utility bikes really have the potential to be the future of transport in American cities. Here's why.