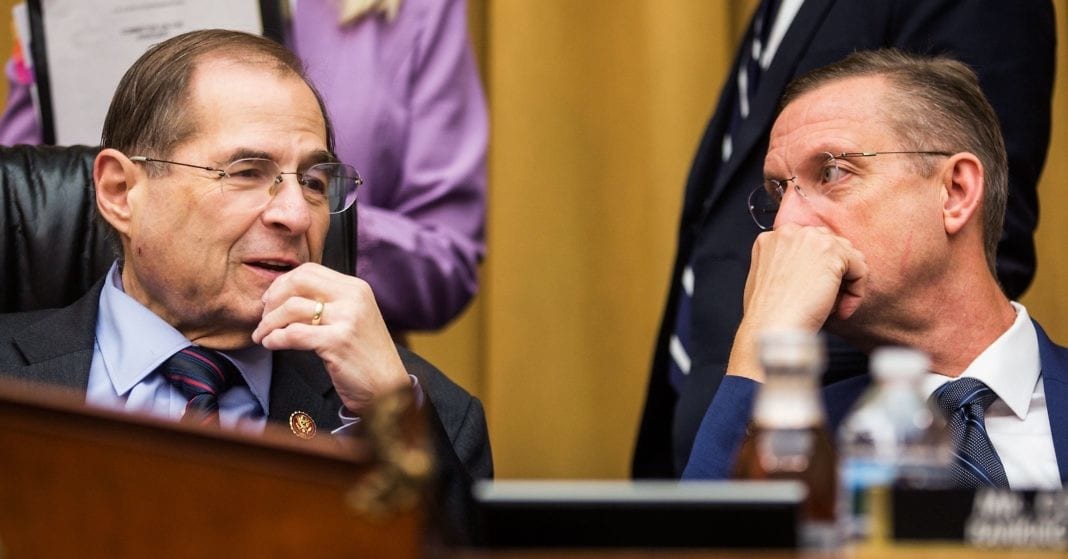 Tuesday's House Judiciary Committee hearing on the rise of hate crimes and white nationalism devolved into a four-hour squabble over who’s most hated, and who’s doing the hating, in America. The members of the committee and some of the eight witnesses who sat before them battled over whether anti-semitism or anti-black hate is most deserving of their attention, and whether it’s white supremacists or Muslims or Democrats or the President who harbor the most hate. Meanwhile, in cyberspace, the comment section on the YouTube livestream of the hearing filled up with so much filth that YouTube had to shut it down.

Like so many congressional hearings before it, the committee failed to reach any meaningful bipartisan consensus or elicit illuminating answers from the representatives from Facebook and Google who sat before them. Instead, by the time it ended, it seemed the hearing had succeeded in doing just one thing, and that is, as Representative Mary Gay Scanlon (D-Pennsylvania) put it, pitting minority groups against each other. The haters, in other words, got their way—and the tech giants that have allowed those hatemongers to fester and find each other got off scot free.

The impetus for the hearing was, of course, the recent mass shooting in Christchurch, New Zealand, in which an apparent white supremacist, deeply steeped in alt-right internet culture, slaughtered 50 people at two mosques, and broadcast the attack on Facebook Live. That video spread far and wide on Facebook, YouTube, and other platforms, leaving tech companies helpless to stop its spread. As a result, among the witnesses at Tuesday’s hearing were representatives from Facebook and Google who work on the platforms’ content policies.

It seemed possible that such an obvious tragedy, which so clearly exposed how tech platforms have become a honeypot for hate and violence, might prompt even a deeply divided Washington to seek real answers about what to do about it. But that was too much to hope for.

Some of the day’s witnesses came armed with facts about the scope of the problem. There was Eileen Hershenov, senior vice president of the Anti-Defamation League, who explained that over the past decade white supremacists have committed more than 50 percent of all domestic extremism-related murders. Over the past year, they’ve accounted for more than three-quarters of them. Others, like Mohammad Abu-Salha, came to tell their stories. In 2015, Abu-Salha’s two daughters and son-in-law were shot and killed at home in Chapel Hill, North Carolina, a gruesome murder that Abu-Salha believes was driven by anti-Muslim sentiment. The alleged shooter is still awaiting trial for first-degree murder in what investigators initially said was a parking dispute. "There's no question in our mind this tragedy was born of bigotry and hate," Abu-Salha said, choking up at times as he spoke.

Candace Owens, a conservative commentator with the group Turning Points USA, said in her opening remarks that the real hatred is coming from Democrats and gave tech companies cover for their role in stoking hate. “They blame Facebook. They blame Google. They blame Twitter. Really, they blame the birth of social media, which has disrupted their monopoly on minds,” Owens said of Democrats. “They called this hearing, because they believe if it wasn’t for social media, voices like mine would never exist.”

Owens accused Democrats of “manipulating statistics” on hate crimes, a notion Hershenov was quick to dismiss, and said that if the left really cared about cracking down on white nationalism, they would hold a hearing on the far-left group antifa, which Owens said chased her out of a Philadelphia restaurant.

As all this unfolded, the tech industry representatives—Neil Potts of Facebook and Alexandria Walden of Google—mostly sat back, fielding overly simple questions about whether Facebook allows people to report hate or how YouTube spots videos that violate its policies. Even those committee members who seemed serious about holding tech companies accountable lacked the time needed to pin the companies down on, for instance, whether they have historically policed white supremacist content as fiercely as they've monitored, say, ISIS content. And if not, why not?

Hershenov, meanwhile, raised the important point that content moderation can sometimes drive people spewing hate to other platforms where their threats of violence are less visible to law enforcement, and possibly, more dangerous. But Potts wasn't asked to answer for how Facebook plans to police these very threats in the future, when, if CEO Mark Zuckerberg stays true to his recent promises, all Messenger, WhatsApp, and Instagram direct messages will be encrypted. Nor were either of the techies on the panel asked about whether their companies are watching platforms like Gab and 8Chan, which Hershenov described as "digital white supremacist rallies," for signs of what new hateful content might be headed for their sites. And while, in a meta moment, Chairman Jerry Nadler read aloud from a Washington Post story about the hateful YouTube comments on the committee's very own livestream, no one stopped to ask Walden about YouTube's broader issues moderating comments of all kinds.

On Wednesday, the Senate Judiciary Committee will have a chance to follow up on some of these questions in another hearing with Potts and Twitter's director of public policy Carlos Monje, Jr. But if the hearing's title is any indication—Stifling Free Speech: Technological Censorship and the Public Discourse—it's all but guaranteed to be another good day for the haters.

Update 4-9-19, 5:29 pm EDT: This story has been updated to feature an additional photo of the committee chairman and ranking member.