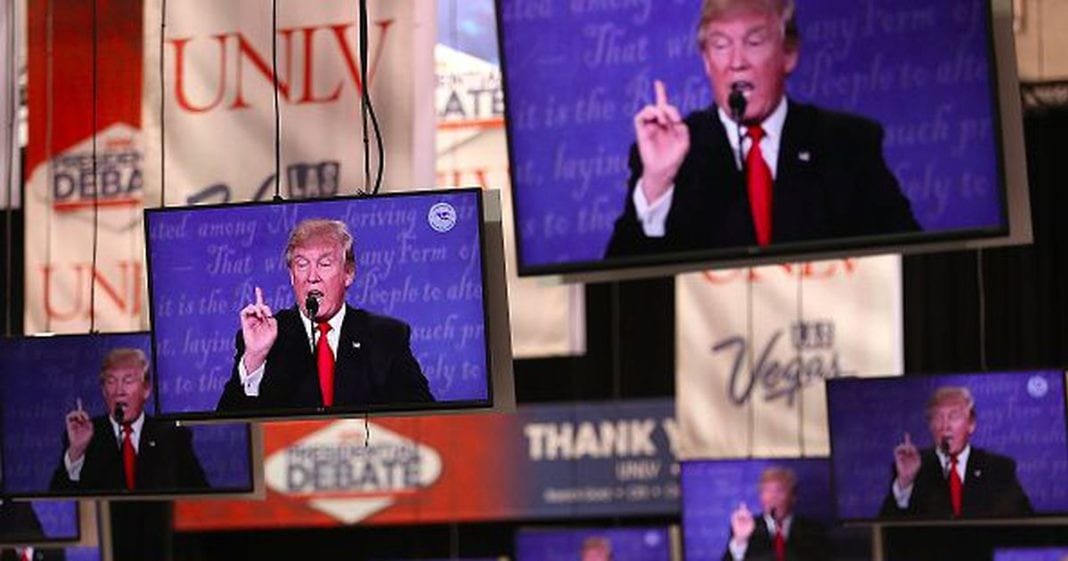 It was the presidency almost no one saw coming.
Image: justin sullivan/ Getty Images

Donald Trumps supportersmade a surprisingly strong showing on Nov. 8, and not just at polling places inthe rust belt. Twitter bots accounted for nearly a quarter of all postings that included hashtags related to the election, according to ananalysis byresearchers at CorvinusUniversity, Oxford, and theUniversity of Washington published on Thursday. They found that pro-Trumphashtags got five times as muchtraffic from automated accounts as hashtags that were pro-Hillary Clinton.

The use of automated accounts was deliberate and strategic throughout the election, most clearly with pro-Trump campaigners and programmers whocarefully adjusted the timing of content productionduring the debates, strategically colonized pro-Clinton hashtags, and then disabled automated activities after election day, the researchers wrote.

Twitter dismissed the idea that automated propaganda influenced voters. But the discussion of coordinated bot campaigns fits into the broader post-election theme that social media companies need to re-examine their role in amplifying abusive or misleading political messages. In the days before the vote, messages designed to confusepro-Clinton voters about the process circulatedthrough the system, and Twitter was criticized for being slow to respond. This week, the company has cracked down on white nationalist accounts and introduced a new filtering tool that allows people to mute certain words in an attempt to clampdown on harassment. Facebook has also been forced into some soul-searching over its approach towards fake news on its platform.

The study onTwitter bots, part of aneffort called the Project onComputational Propaganda, examined 19.4 million tweets posted between Nov. 1 and Nov. 9. All of the messages used some combination of hashtags related tothe presidentialcampaign, with some being clearly supportive of onecandidate (#MakeAmericaGreatAgain, #ImWithHer)and others having noexplicit political leaning (#Election2016, #iVoted).The study then flagged accounts that tweeted too often to be credibly human as bots, defining any account that posted at least 50 messages a day using one of the election-related hashtags as “highly automated.”

Thisdidntmean there wasnt a human involved. Philip Howard, one of the authors of the report, says that there are signs that people are actively managing fleets of automated accounts to make them seem more authentic.They look good. They have good photos, they sometimes tweet about soccer scores, and they are rabidly pro-Trump, he said. Its hard to know forsure, butHoward says most automatedaccountsare probably controlled by independent supporters of the candidates.

In the studys sample, highly automated accounts generated close to 18 percent of all Twitter traffic about the election, butthat proportion grew at key times such asthe televised debates and in the final few days before voting.The top 20 accounts tweeted over 1,300 times a day, about 2,600 times the rate of the average account.

The partisan disparitygrew over time. During the first debate,there wasabout four times the amount of highly-automated pro-Trump activity, compared to similar trafficsupporting Clinton. By election day, the split hadgrown to five to one. The day after the election, bot activity dropped off significantly.

Twitter says that the report usesflawedmeasurement tactics to come up with misleading claims. It says the study’s threshold for determining whether an account is automated is low enough to capture some prolific human users of the service. Moreover, by measuring howmuch an account tweets rather than how many people see its messages, the study isnt considering whether these accounts make an impact. Twitter alsosays it uses algorithmic methods to determine which hashtags show up in its trending topics section, which guard against attempts to spoof the system with high volumesof low-quality traffic.

Anyone who claims that automated, spam accounts that tweeted about the U.S. election had an effect on voters opinions or influenced the national Twitter conversation clearly underestimates voters and fails to understand how Twitter works, said Nick Pacilio, a spokesman for the company.

Twitter has always allowed automated posting, although it deactivatesaccounts that sendspam. Howard says there’s also no clear reason to think automated politicking is illegal. “Bot use is probably a form of protected speech,” he said. Howard says he met with Twitter last year to discuss ways to work together, but the company declined to share its internal methods for identifying bot activity.

Researchers whostudythe use of bots in political propaganda say the tactics are still evolving. In Venezuela,radical opponents of thegovernment have made accounts purporting to be political figures for the purposes of spreading misinformation, but mostlyhave been used to promote innocuous political events. Whenopponents of Syrian President Bashar al-Assad began using hashtags on Twitter to organize and share evidence of abuses, bots began using thesame hashtags to post a wave of recipes and other inane content, according toDouglas Guilbeault, a doctorate student at the University of Pennsylvanias Annenberg School forCommunication.

On Wednesday, the whitenationalist website the Daily Stormer said it had created over 1,000 fake Twitter accounts that purported to be the personal accounts of black people, and urged its readersto do the same. It alluded to a future trolling campaign. “Twitter is about to learn what happens when you mess with Republicans,” wrote Andrew Anglin on the site.

Bottactics areoften relatively unsophisticated, says Guilbeault, but bots are a cheap tool that seem to prove successful atmuddying things up,spreading confusion, and making life unpleasant for politicalopponents. Guilbeault, who works with the Project on Computational Propaganda, says its not clear how big of an impact bots are having today.If bots have even a minor influence, thats scary, he said.

Lyft Redesigns Its App—and Strategy—for the Age of Sharing

Facebook and Google: most powerful and secretive empires we’ve ever known