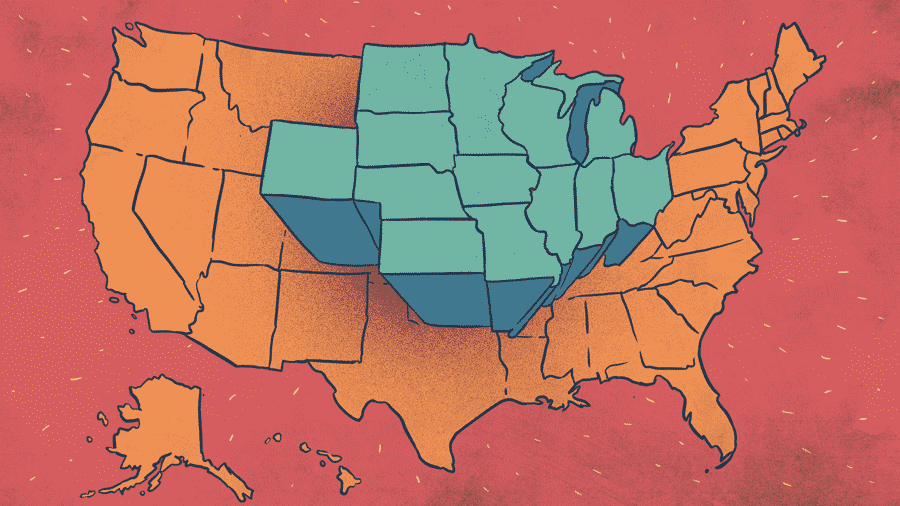 Jason Rowley is a venture capital and technology reporter for Crunchbase News.

The American Midwest, to some, is just the flyover states. Its tropes rusted-out factories, cornfields and calorically dense fried foods at state fairs are well-known.

However, its also increasingly home to more technology startups. Looking through the lens of startup and venture capital funding activity, well be looking out how the Midwest and its metros stack up against one another.

What, exactly, constitutes the Midwest? A2014 surveyby FiveThirtyEight had 10 percent of respondents say that places like Wyoming and Pennsylvania are Midwestern states. Thats a stretch. At Crunchbase News, our definition of the Midwest will be based on theU.S. Census Bureau.

Because there is no one right way to go about ranking the metropolitan regions in each of these states, we have opted to do a lot of rankings instead! Well be sure to keep track of which cities perform the best in each of these rankings, which will produce an all-around ranking for the best of the Midwest.

Before we continue, its recommended that you dont fly over the rest of this post.

Metros ranked by number of startups founded since 2015

Here are the key measures of startup and venture capital activity in the Midwest that Crunchbase Newsis going to rank:

The number of companies founded in a particular geographic area is a good proxy for the amount of entrepreneurial activity happening. And, when these figures are gathered for a number of areas, we can compare the absolute level of new startup activity.

In Crunchbases data, we were able to find exactly 1,000 startups founded in Midwestern states with founding dates between January 2015 and the end of July 2017. Aggregated around metropolitan regions, heres how they all compare:

Of course, theres the possibility that these numbers are slightly skewed. Not every company in Crunchbases data set has a founding date listed, so its likely there are more companies that have been started than whats listed here. However, although the exact numbers might be a bit off, there are notable trends when marked proportionally.

More than five times as many companies were founded in Chicago than in Minneapolis. Interestingly, the Detroit metro area saw roughly the same number of startups starting up as Minneapolis, despite having a population thats 30 percent smaller and comparatively less well-off than the area around Minneapolis and Saint Paul, MN.Accordingto the MSP Regional Economic Development partnership, the greater Minneapolis-St. Paul metro area is home to 17 Fortune 500 companies, which is more per capita than any other metro region. The abundance of good jobs in Minneapolis may explain why startup founding activity, on a per-capita basis, is lower.

A third tier of cities like Cincinnati, St. Louis and Indianapolis seem to chug along quite nicely. But still, those metro areas pale in comparison to market-leading Chicago.

Metros ranked by investment round counts

The number of investment rounds in local startups is another important measurement of vibrancy in a startup ecosystem.

We analyzed just under 2,400 venture capital deals struck with companies based in the Midwest between the beginning of January 2015 and the end of July 2017; this gives us a relatively broad measure of startup ecosystems in the broader region:

Again, Chicago leads the pack, a trend well see throughout other rankings, as well. That being said, the relative difference in venture funding activity is less dramatic than our ranking of startup founding activity. Since 2015, Chicago only had a little over three times as many venture rounds as Minneapolis.

Although the number of VC deals point to a more absolute yardstick of investor interest in a metropolitan region, the dollar volume represented by those deals often draws a starker comparison between ecosystems.

Of the 2,400 deals we analyzed from above, roughly 1,840 of them had dollar amounts associated with the round. Heres how the metros compare:

Please note there were around 560 rounds for which we didnt know much money was invested. Again, like with our measure of startup founding activity, this means that the actual dollar volume invested into these markets is greater than whats listed here. However, like with previous measurements, theres strong reason to believe that the relative rankings are sound.

It goes without saying that investors are a necessary ingredient in healthy startup ecosystems. And there are many kinds of investors, broadly defined in two categories: institutional and individual investors.

Heres the ranking of metropolitan regions in the U.S. ranked by the number of institutional investors:

Again, mostly by dint of being a major financial center, as well as being the regions biggest city, the Chicago metro area is home to the most institutional investors in the Midwest. Although Minneapolis places third in the rankings here, its also home to a vibrant scene ofmature andupstart life sciences companies, which are capital-intensive to start up and run. This could explain Minneapoliss strong performance relative to Detroit and other metros in the ranking of total VC dollar volume.

Finding the best in the Midwest

Weve taken a look at a number of different metrics, each time comparing the relative performance of more than 50 metropolitan regions in the Midwest. But now its time to bring it all together to see which metro regions are the Best of the Midwest for entrepreneurs and investors alike.

In the chart below, weve ranked each metro region by its average ranking over the four metrics weexamined (the lower the number, the better the city did):

There are, no doubt, plenty of opportunities for entrepreneurs and startup investors in smaller Midwestern cities to find a path to success. So if youre from Omaha, Kansas City or other cities on this list, take heart. And if you do find yourself in need of a bigger pond, Chicagos just a few hours drive away through the heartland.

In addition to broader coverage of the U.S. VC market inQ1andQ2of this year, Crunchbase News also analyzedVC funding in Texas in Q2. The reporting team here is looking to cover more hubs from off the beaten path.

Human laziness is a market strategy for mattress and furniture startups