Mysterious Chinese billionaire Jia Yueting has a stake in both car firms. But after internal dissent and the departure of the co-founder, whats the future for Atieva? 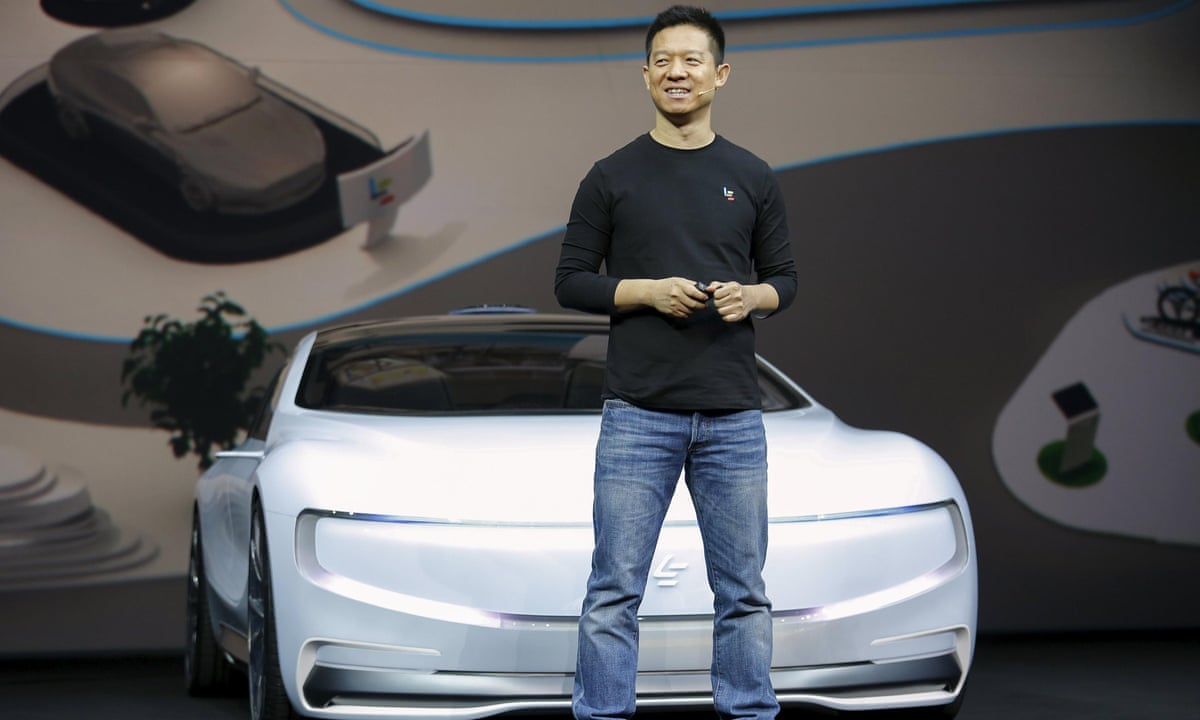 The glossy video on the website of Atieva, a Silicon Valley startup developing a self-driving electric vehicle, is a hard sell for the California dream. To reimagine the future, were rewriting the rules. Applying the California state of mind to shape a new vision of what a car can be.

But a Guardian investigation can reveal significant problems inside the troubled startup including concerns among staff after a major investor was revealed to be Chinese billionaire Jia Yueting the owner of rival Californian EV startup Faraday Future.

Sources inside Atieva fear that Jias ultimate aim is to merge Atievas battery expertise and perhaps the whole company into Faraday Future, a mysterious but well-funded startup that has yet to reveal much about its own plans.

Atievas problems started in late 2015 when its founder and CEO, Bernard Tse, left the company following friction with its largest shareholder, Beijing Automotive Industry Holding (BAIC), one of Chinas leading state-owned carmakers. The company has yet to publicly acknowledge this or announce a replacement.

Then in early April 2016, BAIC sold its entire 25% stake in Atieva, according to sources close to the company, who say that Jia is the most likely purchaser.With Faraday Future breaking ground last week on a new $1bn assembly plant in Nevada, several Atieva staff now expect the company to be absorbed into Faraday Future before its own product even sees the light of day.

The Guardian approached Atieva and LeEco, which has close links with Atieva, for comment but they did not respond. A spokesman for Faraday Future said that it operates independently.

Car companies must understand both Silicon Valley and the car industry

Previously a vice-president at Tesla, Tse founded Atieva in 2007 alongside former Oracle executive Sam Weng. The car business is seeing a sea change, Tse told the Guardian. This is the opportunity that Silicon Valley has been waiting for since 1945. The business is changing and Silicon Valley thrives on that. Tse would not comment on changes among Atievas investors.

For its first few years, Atieva worked quietly to perfect batteries and drivetrains, filing more than 100 patents and building battery packs for electric buses in China, yet generated barely any revenue and stood little chance of a stock market flotation.

Then in February 2014, two Chinese firms took a stake in Atieva worth nearly $100m. BAIC bought just over 25% of the company, followed closely by LeEco, the video and consumer electronics firm founded by Jia. It was envisaged that BAIC could help assemble and market Atievas vehicles in China, while LeEco would contribute connectivity and entertainment systems.

Software and services are the new black in the automotive value chain, says Tse. Its extremely important that a company understands the strengths of both Silicon Valley and car companies, borrowing from the best of both worlds and using this to address problems on a global scale.

With the influx of cash, Atievas mission changed overnight: it would no longer tinker with electric buses but accelerate its plans for a connected, autonomous electric passenger car. The company planned to grow from 85 employees to more than 300, and in April 2014 BAICs chairman, Xu Heyi,claimed that Atievas first car would be ready for the end of 2015 and would outperform Teslas Model S.

We secretly and quickly recruited a truly world-class global team of engineers, remembers a former senior executive at Atieva, who spoke to the Guardian on condition of anonymity. At the engineering level and beyond, they were all super passionate about this clean slate opportunity for building an electric vehicle, and had enormous trust in Bernie.

How are LeEco, Faraday and Atieva connected?

Jia Yueting, however, was secretly hedging his bets. In April 2014, Jia formed his own self-driving car startup, Faraday Future. The links between LeEco, Faraday Future and Atieva are murky, and Jia initially maintained some distance between the businesses.

Atievas management board, one source said, had no idea that Jia, as one of the companys board members, was financing a direct competitor. Asked in 2015 whether Atieva was a separate company, LeEcos marketing director, Qimei Luo, told the Guardian: Yes. LeEco has its own employees. The investment to Atieva is a separate deal.

In February 2015, Atieva set up in a nondescript building in Menlo Park, 30 miles south of San Francisco. You wouldnt think that a Tesla competitor would be inside this building, says one former executive. Publicly filed plans obtained by the Guardian show a windowless designer car showroom in the middle of the building, a garage workshop and multiple labs and testing areas.

Yet regulatory filings show that Atieva is registered to a different address eight miles away in Redwood City the same address as LeEcos Silicon Valley office. Dozens of visas for Atieva employees during 2014 and 2015 were also issued to the same location.

When Atieva managers eventually learned that Jia was also bankrolling Faraday Future, the news did not go down well.

Martin Eberhard, who co-founded Tesla Motors in 2003, was a vice-president at Atieva for just six weeks during 2015. The relationship between Atieva and Letv [the former incarnation of LeEco] became very strained when Letv invested in Faraday, he says. I left Atieva because thats not my kind of company. Its being run like an old-school Hong Kong company which is not my take.

Meanwhile, Atieva seemed to be making good technical progress, especially with its electric powertrain. But disagreements with investors were escalating, and BAIC wanted to install a chairman of the board as well as make key product and marketing decisions.

Tse attracted BAIC as an investor for all the right strategic reasons, but there was tension about whether to put the product first into the US or into China, remembers a former Atieva executive. As CEO, Tse wanted to build Atievas brand, so he wanted to go to the US first. That was not an acceptable answer.

Tse stepped down as part of an ugly regime change

In early November 2015, Atieva underwent what one current employee calls an ugly regime change when Tse was forced to step down and was replaced by an acting CEO. Several of Tses senior management team left at the same time. The main reason the only reason I left Atieva after eight years as CEO is that it was quite apparent to me that the direction of the company had changed, Tse told the Guardian.

The employee said the regime change made it difficult to continue working there. Management has tried to dictate who employees are allowed to be friends with, while employees have been accused of being spies for the previous regime. Loyalty and politicking seem to take precedence over merit and problem solving.

Atievas rollercoaster ride is not over yet. Multiple sources say that BAIC sold its stake in early April 2016, yet the purchaser is still unknown. What seems certain is that Atieva has lost the chance of having BAIC build its own vehicle, which had been expected to be launched in 2018.

At the start of April, BAIC was reported to be developing another electric supercar, with yet another Chinese-backed Silicon Valley electric vehicle company, NextEV.

Only time will tell whether NextEV has a more Californian state of mind about letting BAIC call the shots.