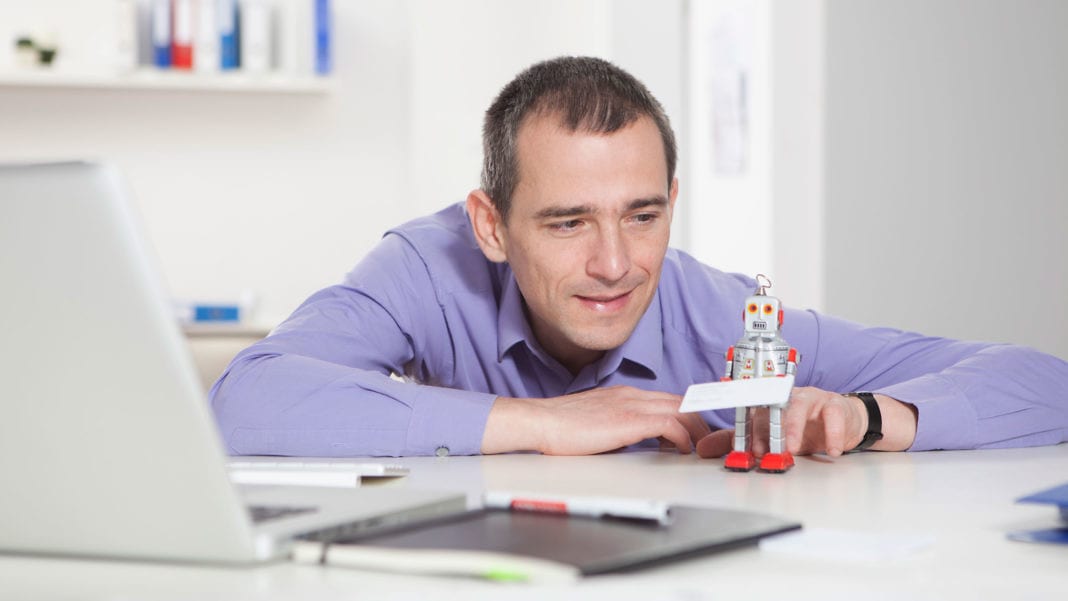 Dan Reich is co-founder and CEO of Troops.

One of the first computers required punch cards.I repeat, punch cards. Yes, you would take a piece of paper with tiny holes and use it to interact with the device.

Now we have computers the size of soda cans that sit in your house and control your lights, provide weather updates, solve math equations and tell jokes, all by simply speaking to them and some of them have better jokes than my actual friends.

In many ways, we all should have seen this coming we can thank our Hollywood friends for that.

We had C-3PO and R2-D2 running around the galaxy with Luke trying to help him save the universe from his dad.

Artoo says that the chances of survival are 725 to 1. Actually Artoo has been known to make mistakes from time to time Oh dear

More recently, weve had others as full-fledged assistants that are smarter than most humans,like TARS from Interstellar and Jarvis from Iron Man.

As youre reading this, youre probably doing some kind of work. Its a thing we spend one-third of our lives doing, after all. (Sleep and Netflix supposedly make up the other two-thirds.)

Given the massive chunk of our lives spent at work, shouldnt we enjoy the tools we need to use for our jobs? Shouldnt they feel more human and delightful, like Amazons Alexa or some of the other consumer-facing applications we rely on daily?

And how much more effective and productive could you be if you had something like TARS or Jarvis helping you with your job?

I think the answer is a lot!

How do we get there?

Many of the consumer-facing AI solutions we see today are built on the backs of generic APIs.

Lets take something like Siri, for example. If you wanted to know the weather, you would simply ask:Siri, whats the weather?

Siri could then transcribe your question and reach out to weather.com or another weather service for the answer using your location as a proxy.

Based on the answer, youd have the immediate information you need to determine whether you should take an umbrella to work or not.

However, introducing a similar, frictionless AIassistant in the enterprise is a bit more challenging. Things are a bit more complex because each organization uses varying degrees of tools and workflows to run their business.

Borrowing from the weather example above, lets say you wanted to know how much revenue was booked for the business in the first quarter. You might ask:Siri, how much revenue did we book in Q1?

If this Siri for work existed, it might give you an answer along the lines of $100mm.

From here you might want to drill deeper into revenue generated from each product line. If you were the Chief Revenue Officer of Microsoft, you might want to know how that revenue breaks out between Office 365, Windows and Xbox and you might want the answer to be in top-line revenue because thats how you like looking at the forecast.

Shouldnt we enjoy the tools we need to use for our jobs?

Do you see how nuanced this can become? As we start to account for organizational preferences, things get complicated very quickly.

Its easy to see how replicating Siri for work is a much heavier problem to solve because of the variance amongst organizational processes, systems and preferences. For consumer applications, there isnt nearly as much divergence in the answers users expect (see above); this does not hold true for businesses.

This same issue applies in the context of scheduling. There are companies like x.ai and Clara Labs trying to take the simplicity of Alexa or Siri and apply it to the tedious task of scheduling meetings.

Its one thing to say:Siri, book me a meeting with Jon for some time next week.

But all of a sudden you realize there are a handful of non-trivial variables this scheduling Siri would need to take into account. Things like the location of the meeting, preferences of the person taking the meeting, the availability and coordination of both parties instead of just one and so on.

And lets take one more vertical application similar to Jarvis for Work.Within the legal industry, an AI-powered lawyer called ROSS has emerged.Firms can ask ROSS questions like they would their colleagues on important data, like citation resources, and it returns an answer. Their secret sauce is based on using natural language processing (NLP) to query publicly available law documents.

But can ROSS adopt to the style of the firm and specificity of a given case? Maybe some firms have found that very recent court rulings tend to be the best support, while others rank searches based on credibility and prominence.

In all the instances, there is nuance, which means some level of unique configuration and intelligence is required. This should comfort those fearful of waking up one day and having their job completely replaced by a robot. More realistically, the robot will allow them to be 10x more productive and allocate more time to higher-leverage tasks.

Weve seen this story before; each time we experience new technological breakthroughs, we learn that peoples jobs are changed but not altogether replaced.

Different, yet the same

In all these different instances, the end result and goal for a user remains the same.

A perfect Siri for work would help reduce complexity and guide the end user to more quickly arrive at the information they need to make a decision or take an action. In the enterprise, even slight improvements can mean huge revenue increases and significant cost savings.

But, lets take it a step further and explore how this artificially intelligent assistant at work evolves and becomes more intelligent over time.

The previous example highlighted the ability to look up information. What about having the AI suggest and take actions for you?

As we start to account for organizational preferences, things get complicated very quickly.

Say the VP of Sales at Microsoft needs to forecast her revenue for the quarter. Well call her Samantha. To do that, Samantha would need to have accurate close dates of when she thinks her deals will close. In this hypothetical example, she has five deals that are supposed to close in one week, but the AI knows there has been no communication with those accounts for more than four months because it understands your email, social media and phone communications.

Is it likely those deals will close? Probably not.

Voil. The dates are closed and Samantha doesnt look like a slouch at the next forecast meeting.

Its easy to see how facilitating this level of workflow is entirely too complex for an out-of-the-box plug-and-play solution like Amazons Echo or Apples Siri. It requires a greater degree of configuration that is specific to the organization and which becomes smarter over time based on user input and data.

To facilitate this there needs to be a middle layer or conversational run-time between the various systems and data sets in an organization so an end user can quickly and easily do their job without having to open a new app or piece of software.

So what does this all mean?

The next frontier of software development and technological breakthrough will happen in a conversational run-time. I call it conversational CRM. It is the inevitable evolution of the technology stack for the enterprise.

This next era will occur on top of conversational interfaces because it is where work is already getting done and everyone already knows how to use them. This is why we are building on messaging platforms like Slack, which will serve as the conduit to facilitate enhanced intelligence at work.

Moreover, there will be even more companies, big and small, that crop up to help power some of the underlying technology that makes this intelligence and conversational workflow happen.

For example, Google recently unveiled TensorFlow,which is an open source software library for numerical computation using data flow graphs. To break that down in English, this sort of technology enables computers to do computations that more closely mirror the way human brains think and make decisions. Some people call this deep neural networks.

Theres also IBM Watson, which provided the backbone for ROSS mentioned above.

Within the realm of smaller startups, you have companies like API.ai and Wit.ai, which was recently acquired by Facebook, that have built a simple natural language processing API that helps developers turn speech and text into actionable data. This sort of technology will help bring that Siri-like experience to many other applications and experiences.

So as computers continue to shrink, and eventually shift from robots the size of soda cans to no interface at all, the next area of innovation will live in the messaging context (voice, text, email). Interactions between humans and machines will occur in the same place, side by side, all working toward a common goal of driving businesses forward.

The lines will get blurry, and, just like the movies, we, too, will have our own R2-D2 or Jarvis at work no matter where work may be.

There was once a vision to put a personal computer in every home.Many companies today have a similar vision, which is putting a personal AIassistant for work in everyones hands. Think of it as a Jarvis for Work of sorts, except Jarvis will have cousins that each specialize in their own, unique vertical.

Shortly, even the CEO will be outsourced to an online labor marketplace

John Stossel: Google can fire an technologist but social engineers will never erase the...