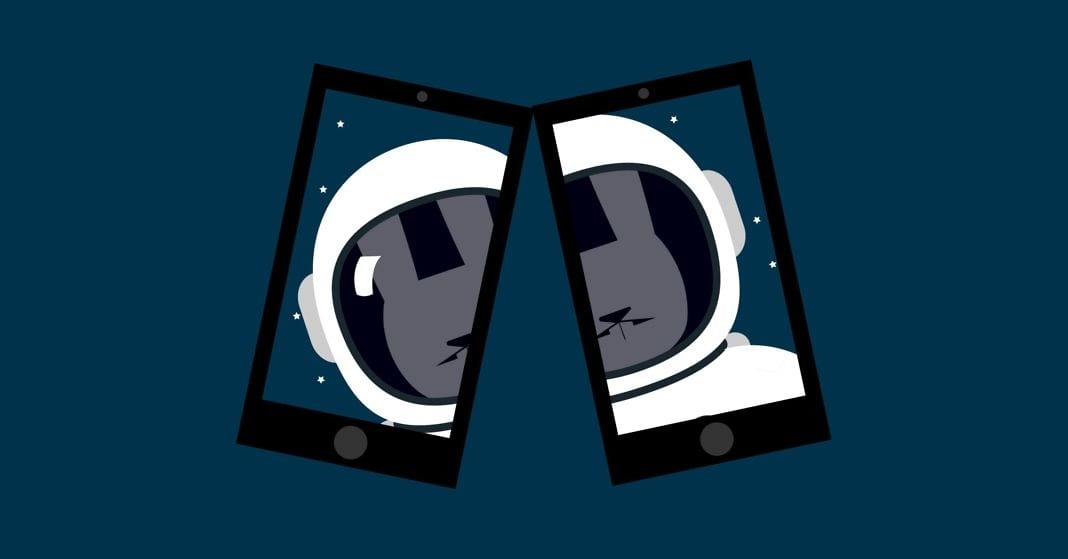 At age 25, Anjney Midha has a stronger resume than some people twice his age. Before graduating from Stanford, he joined the venture capital firm Kleiner Perkins Caufield & Byers. He led the firm’s investment in Magic Leap, the mysterious and much-hyped augmented reality company. Then he ditched venture capital to pursue a dream that had followed him from a technology-free young adulthood on a bird sanctuary in India, to the hyper-connected streets of Singapore, to his days at Stanford.

That dream was to share his world—more than he could show in a photo, better than what he could convey with words—with the family and friends he’d left in India. In July, he and his college friend Ankit Kumar cofounded a company called Ubiquity6 that tries to do exactly that, through an augmented reality app for phones. “We allow anyone with a phone to create a space together and then start editing that space, editing reality together,” Midha says.

On Wednesday, Ubiquity6 debuted its app, which implements several features that have not previously been brought together. Using the phone’s camera, the app creates a 3D map of a room in about 30 seconds—much faster and more accurately than what is typically possible with a phone, which today can take many hours. It uses deep learning to recognize the walls and furniture for what they are, and comprehends their physics so that a digital ball bouncing off a real-world couch behaves differently than a ball hitting a hardwood floor.

Most AR apps today are solo experiences, but this app lets people invite others into their digitally enhanced environment. In preliminary tests Midha says the app hosted 10,000 users in a single space. Those users can then interact with digital objects or characters that take on a life of their own. For example, one day you and your friends might decide to play with a digital lion cub. If you close the app and return a day later, the cub might come bounding over to greet you (or beg you for food). That’s unusual, too—most AR experiences don’t last beyond a single session.

These features may not sound groundbreaking, but that’s a reflection of the early, experimental state of AR. For it to grow into a useful, mainstream phenomenon, AR will have to tap into humans’ innate desire to connect with one another, and it will have to become much smarter about its environment. Pokemon Go, the breakout AR game of 2016, only offered a rudimentary way for multiple users to inhabit the same digital space. That may change in future games. Niantic, the maker of Pokemon Go, last month acquired a startup called Escher Reality that has been developing multi-person, persistent AR experiences. And last September, Apple showed off a multiplayer AR game called The Machines, in which players shoot each other’s robots as they run around on a flat surface such as a floor or tabletop. Ubiquity’s graphics can’t compete with the exquisite polish of The Machines, but its technology supports a richer mix of real and artificial worlds: One of its games lets you put a digital basketball hoop on any wall and play a pick-up game with friends.

The most distinguishing feature of Ubiquity6, however, is that it’s not a one-off app. Most AR experiences today are standalone games or tools to assist in shopping or real estate, such as the app that lets you see what digital replicas of Ikea furniture would look like in your home. “It’s kind of like if you had to download a separate browser for every single website you wanted to visit,” says Midha. Ubiquity is a platform from which you can launch a suite of games and reality-editing tools. Midha calls it a spatial browser.

“Think of us as building the browser, and we’re helping people build the first websites for the physical world,” Midha says. The hope is that developers will build more apps using its tools. “Ultimately we believe people will be building a ton of things we haven’t imagined that you’ll be able to search, discover and launch with the people you care about, using our browser.”

It’s a lofty goal for an eight-month-old startup with 17 employees. With $10.5 million in funding from investors including Index Ventures, First Round Capital, Kleiner Perkins and others, they’re going head to head with much bigger, well-funded companies that want a controlling stake in the emerging AR landscape. According to a report from the analytics firm Digi-Capital, AR and VR companies raised more than $3 billion last year, with about half of that going to four companies: Magic Leap, a UK startup called Improbable, the gaming engine Unity and Niantic.

“It’s kind of a race right now to define what the ecosystem will look like,” says Brian Blau, an analyst covering AR and related technologies for the research firm Gartner. “The cool thing is that it’s a green field right now, it’s open. Some of the bigger companies are going to carve out their own area, but that leaves room for startups, especially if they have something unique.”

Ubiquity6’s edge may come from its unusual origins. Unlike many of the more visible AR efforts, its founders are not gamers at heart. For Midha, the motivation is personal.

Growing up in Chennai, in southern India, he had what he calls a typical childhood, playing video games and watching movies—until, at age 10, his parents sent him to a boarding school surrounded by open fields and a bird refuge. The school’s philosophy viewed technology as a distraction from finding one’s identity and purpose in life. So the school banned all computers, TV, phones, internet and video games. Students had access to email for 20 minutes once a week. (“It was like growing up in the ’80s,” he says.) After seven years at the school, he got a scholarship and left to finish high school in Singapore. “Overnight I went from playing in the dirt and reading books to this connected metropolis, where everyone is on their phones and the entire school is on the internet. It was a shock to my system,” Midha says. His Singaporean classmates did not understand his background, and when he tried to describe his new life to his friends and family in India, he found himself unable to convey his culture shock.

He left Asia to attend college, where he once again found himself alone in a foreign environment and struggling to connect with his friends and family. As he was processing his own frustration, Evan Spiegel was living in a dorm room two doors down and working on what would soon become Snapchat. Snapchat struck Midha as a step in the right direction—it was more spontaneous and less curated than apps like Instagram, which had recently launched. But it still constrained the experience of life to whatever fit in the app’s floating rectangle. He asked mentors for ways to study AR as an undergrad, but he found few courses that matched his interests.

Midha found the training he craved when he started interning for Kleiner Perkins in his third year. A year later, he launched a seed fund focused on emerging technologies such as AR. Seeing Magic Leap, he says, “was one of the data points that made me realize, finally this is not a science fiction thing. We can do this in my lifetime.” In talks with his old friend Kumar, they realized that Midha’s frustrations around communication could be turned into a product, and that Kumar had the computer-vision experience needed to build it.

At the time Kumar was the chief scientist of a computer-vision startup called Pilot AI, but he spent his nights and weekends hacking together a prototype with Midha. Kumar had also worked for a deep learning venture called Metamind, founded by Stanford AI professor Richard Socher. Intoxicated by the early progress they were making on implementing AR on their phones, Kumar and Midha left their respective jobs and launched Ubiquity6, with Socher as one investor. “They are really, really good in terms of their AI expertise,” Socher says. “There are a lot of AI pieces to making an immersive 3D environment work right, and they’re doing very well on the first parts of their AI pipeline.”

Beautiful technology only matters if users fall in love with it. First Round investor Phin Barnes suggests that what might make people return to the app time and again is checking for digital messages and gifts left in specific places. “That my wife could leave something in my office for me, or I could leave something on the school steps for my daughter to discover as she’s walking in the door, these are the kinds of experiences that could be really fascinating,” Barnes says.

Midha hopes that AR can be the antidote to the communication failures brought about by the internet. “The biggest thing that’s been missing for the entire last decade was our physical embodied space,” he says. He and Kumar have built the on switch for the digital layer of our everyday lives—now it’s up to the rest of us to flip it.

The Untold Story of Magic Leap, the World's Most Secretive Startup

The growing band of startups donating their platforms to refugees