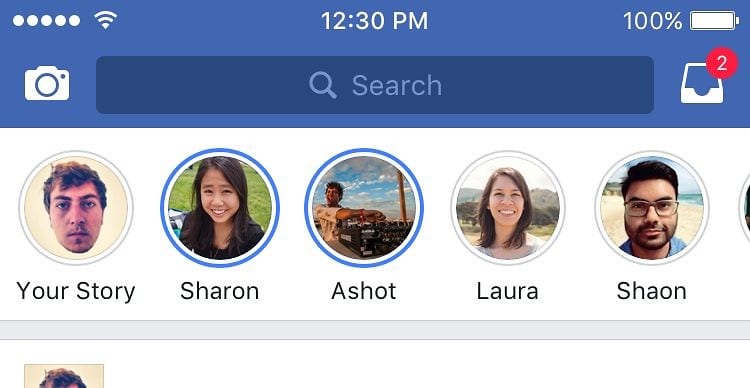 Instagram put a dent in Snapchat by placing its own version of Snapchat Stories atop its feed, and now Facebook is doing the same. Today Facebook launched Facebook Stories in Ireland on iOS and Android, with plans to bring it to more countries in the coming months. The feature lets you share ephemeral photos and videos in a slideshow that disappears 24 hours later. The little circles to watch friends Facebook Stories appear in its main app above the feed so you cant miss them.

Why another attempt at copying Snapchat when Facebook already has a selfie mask-filled camera feature, Instagram Stories, and Messengers new camera too? The company tells TechCrunch:

Facebook has long been the place to share with friends and family, but the way that people share is changing in significant ways. The way people share today is different to five or even two years ago its much more visual, with more photos and videos than ever before. We want to make it fast and fun for people to share creative and expressive photos and videos with whoever they want, whenever they want.

While Facebook has tried to push other copycats of Snapchat, theyve typically lived in separate apps like Poke and Slingshot, or as features buried behind the News Feed, like its revamped camera. But now it will be impossible to use Facebook without being exposed to Facebook Stories. And if theres a space to show off in front of friends, people will use it.

One question will be how Facebook handles Stories on desktop. While most users rely on mobile to connect to the social network, it might be strange if they cant watch Stories on their computer.

The fact that Instagram Stories soared to 150 million daily users in just 5 months using this exact same format hints that Facebook Stories could prove popular too.Facebook built a similar feature to Stories called Quick Updates and tested it in July, but by August said it wouldnt launch it. Apparently Instagram Stories success changed its mind, and thatmight cause trouble for Snapchats upcoming IPO.

Even if it can hold on to its North American user base, Facebooks invasion of the space could prevent Snapchat from growing further, especially internationally. If you can get similar functionality in a convenient place without having to rebuild a friend graph, some people will be happy to settle for a clone.

How to stop Google and Facebook from becoming even more powerful | Barry Lynn...