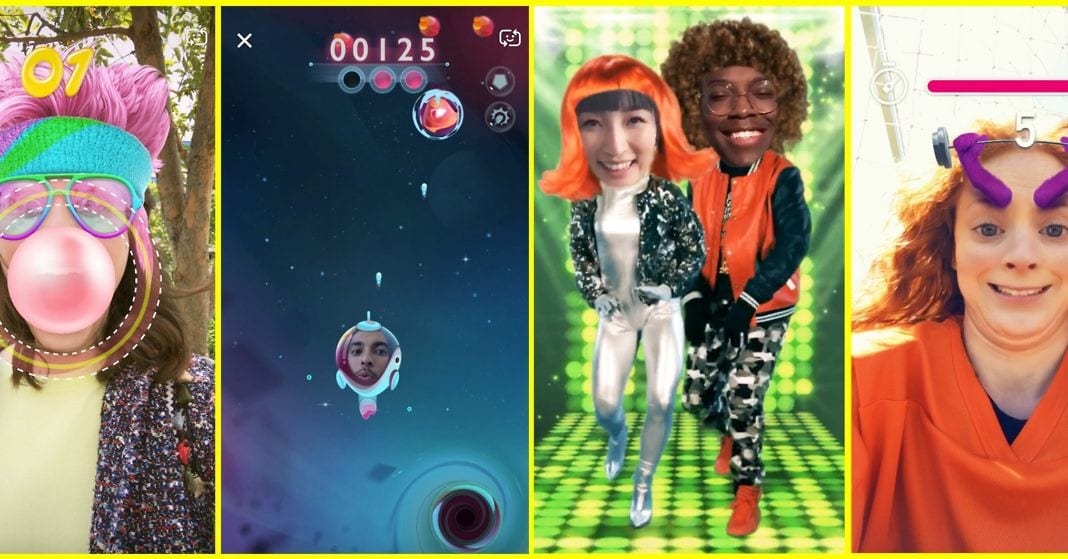 Vomiting rainbows is so 2015. Since Snapchat first introduced its augmented reality lenses, the filters that allow us to vomit rainbows in photos, it has released new ones frequently enough to keep its users hooked. But so far, these AR filters mostly focus on distorting selfies. They allow you to turn yourself into a bug-eyed bunny rabbit or a big-cheeked flower child, or paper something funny—a Jeff Koons statue, a dancing hot dog—atop the physical world.

Now, the company has used those tools to build a deceptively simple product: Today Snapchat introduces games. The first set of these lenses, called Snappables, lets users do things like add friends to a rock band, challenge those friends to an emoji dance-off, or play basketball. Users can interact with the AR games through touch, motion and facial expression. In one completely weird game that I played when I visited the company’s New York office last week, a filter transformed my eyebrows into barbells. I lifted my real eyebrows to raise the barbells. I competed against Eeitan Pilipski, who runs Snap’s camera platform and whose eyebrows are gray wisps covering fast-moving practiced muscle, to see who could lift the most. (He won.)

Snapchat has long been the kind of company that’s easy to underestimate. Its users have mostly been adolescents, and kids are fickle. Sure, right now 187 million people use the app every day, according to Snap, but even if they love it now, it’s easy to assume their attention is fleeting. Facebook tends to copy Snap’s most significant advances.

And not everything the company tries works. After Snap rolled out a major revamp to the app earlier this year, designed to make it easier for new users, more than 1.2 million people signed a Change.org petition asking the company to change it back. Despite this, more than a year after founder and CEO Evan Spiegel took the company public, Snap continues to give its users reason to stick around. Those daily users visit Snapchat 25 times a day on average, according to Snap, spending roughly half an hour on the service.

This has appealed to advertisers: over the last quarter of 2017 sales jumped to $286 million, a 72 percent increase over the year earlier. (The company is nowhere near profitable, however, as it’s still investing far more money than it’s making. Spiegel endeavors to keep users engaged by giving them fresh things to play with constantly.)

The new feature is a tiny change to the company’s product, but it’s instructive in discerning Spiegel’s endgame. Later this week, the company will announce an updated spectacles product. While companies like Magic Leap and Microsoft are trying to build the next computing platform in one mind-blowing package—with a headset and software and content that will obliterate their competitor—Snapchat is attempting to piece together that next computing platform independently, from the bottom up by creating hardware and software separately. “We decouple them so that they’re all allowed to develop on their own until they come together,” Spiegel said. “Over the next decade or so, the way that these pieces fit together will probably be what defines our company.”

Snappables aren't just games, they're expanding the way we communicate

As Spiegel sees it, hardware has been holding augmented reality back. There are tough technical problems that no company has cracked completely. Among other things, existing headsets have narrow fields of view, and the batteries, which bulk them up, don’t hold their charge for very long. We still don’t know how these devices will evolve, and whether most people will ever want to wear them. By developing Spectacles separately, says Spiegel, “we can still move forward at a really fast pace empowering very advanced augmented reality products within Snapchat.”

Gartner analyst Brian Blau, who covers augmented reality, believes that Snap’s strategy to evolve its AR filters through small changes is smart. “The incremental approach is exactly right,” says Blau, who emphasizes that it allows a company to learn as it goes. “That experience is hard to replace, especially when you’re talking about new technology.”

Which brings us to Snappables. To understand Snapchat’s new games, you need to see them as Spiegel sees them—as yet another opportunity for people to communicate with each other. Spiegel’s vision for Snap begins with the assumption that most pictures aren’t intended to be saved. Rather, images are evolving into a new language, and as the tools to capture and manipulate them become more ubiquitous, we are able to express ourselves more frequently and fully. The important thing about Snap isn’t the feed that shows what your friends have posted, it’s set of tools that lets users create those posts. That’s why the app opens directly to the camera, and that’s why Spiegel calls Snap a “camera” company. Like phone calls, Snaps aren’t intended to be stored so much as they’re meant to be absorbed, decoded, and released.

Written and spoken language have never been static. They evolve as we use them, throwing new words like “basic” and “lol” into our lexicon. Similarly, visual communication is exploding right now as we gain new tools to help us evolve our image-making. (Instagram’s original filters are the equivalent of hieroglyphics at this point.) Nowhere is this more obvious than on Snapchat, where the company says users spend an average three minutes every day playing with filters.

Pilipski, the guy who bested my brow reflexes, is charged with pairing computer vision with creative design to evolve the company’s augmented reality tools and help developers make the most of them. In addition to his strapping eyebrows, he brings nearly a decade of experience working in AR, joining Snap in 2016 from the AR startup Vuforia.

The technology in Pilipski’s field has finally evolved to the point where AR can deliver on many of its early promises. For one, cameras have gotten better. Just check out the exclusive face mask filters Snap created for Apple’s iPhone X; the TrueDepth camera and visual facial mapping data allow the masks to adhere closely to your face, no matter how much you move around. Pilipski says Snap is working to emulate these effects on any contemporary phone through software development.

In the past year, Snap has rolled out a stream of new features and filters, starting with World Lenses, which lets users insert and move objects in photos. These popular filters produced the first-ever augmented reality celebrity—the dancing hot dog, with its green headphones and rhythmic dance moves, which has popped up more than 1.5 billion times on Snapchat. In December, Snap let outside developers begin making their own filters. Spiegel said developers submitted 30,000 lenses to Snap during its first two months.

With Snappables, the company will try to evolve AR into an even more social experience, encouraging people to use their cameras less as mirrors, than as sophisticated sensors capable of an expanding range of tasks. In the promotional video, users blink, raise their brows and smack their lips, not to create images, but to control and interact with Snap’s software.

But as smart as Snap has become at developing filters its users want to play with, the technology is in early days. In the last six months, Apple, Google and Facebook each began rolling out their own developer tools for augmented reality. New features and apps that harness these tools are just coming to life now. For now, these apps are clunky, and they don’t come with the built-in benefit of an audience in the form of your friends on Snapchat. It’s more difficult to create a fun experience in an app and then transport it over to a social media service like Instagram. But it’s clear developers—and Snap’s competitors—will be able to continue to copy what works on Snap, and it’s likely they’ll continue to improve.

Spiegel has a chance at unlocking the AR future, and using it to build the next significant computing platform. But for that to be possible, Snap must stay ahead of its competitors as they try to woo users with many of the AR designs it first introduced. Snappables won’t feel new for long.

The Future of AR is Here

Snapchat IPO: Here's What You Need to Know

Snap Inc., parent company of Snapchat, has gone public. Here are some of the facts and figures behind the company now valued at over 30 billion dollars.