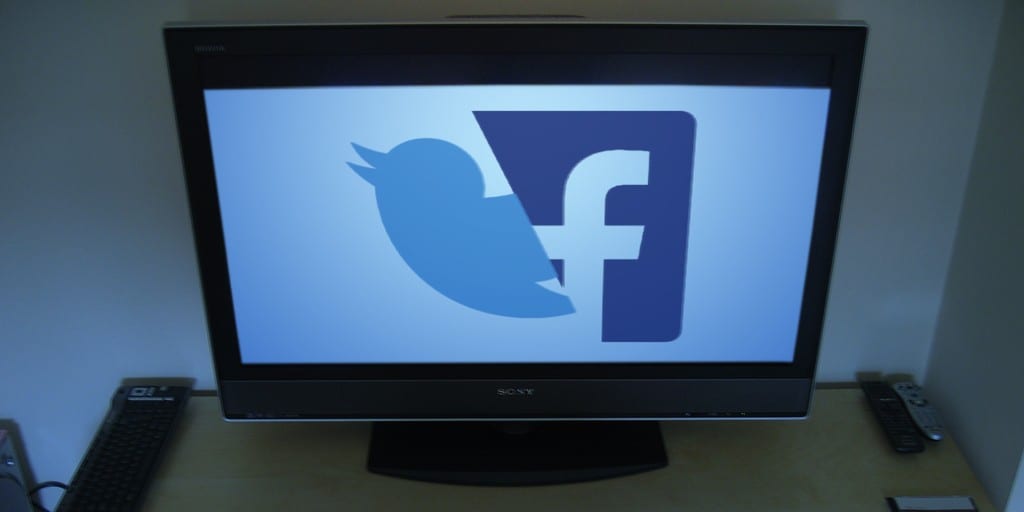 As the TV in your living room becomes more redundant with each passing year, two announcements from the world’s two most popular social-media sites threaten to shake up the televisual landscape yet again.

First it was Twitter, with their news that they’ve signed a $10-million deal with the NFL to stream 10 Thursday night football games over the course of the 2016 season. Then it was Facebook, who two days later rolled out a new Live feature that will allow all of its users to film videos and broadcast them to the rest of the world. While both moves have rightly been framed as modest, preliminary steps into the world of online video, a closer look at the ever-evolving context out of which they emerged reveals that they portend a sea change in the world of television.

That is, they signal a world where social networking sites are our primary sources of TV.

The first element in this context is the continuing rise of over-the-top (OTT) streaming services like Netflix and Amazon Video. Since launching in 2007 and 2006 respectively, these services have helped shape a United States where 53 percent of viewers prefer to stream their television over the Internet rather than watch it the old fashioned way. What’s more, it’s highly likely that this share of the American audience is only going to increase, helped in part by an increasing slew of high-quality programs that are becoming the envy of the older television networks.

They take advantage of their mediumthe Internetto become more responsive to the preferences and identities of their users.

Such programs, including Netflixs Orange Is the New Black, Master of None and Amazons Transparent, have been widely praised for their diversity as well as their quality,. But a big part of the reason why they offer both is because of the model they employ: They take advantage of their mediumthe Internetto become more responsive to the preferences and identities of their users, using customer data to create profiles for these same customers and commission shows accordingly.

For instance, Amazon Video greenlights programs on the basis of the ratings pilots receive from viewers, while the various fan-pleasing reboots that are beginning to proliferate are very often approved because the people at Netflix have direct access to rich viewing stats about older episodes of the corresponding shows.

In other words, OTT streaming services have succeeded because they harness not only the convenience of on-demand scheduling, but also greatly expanded consumer metrics.

Yet even if this exploitation of copious user data has given them the edge over traditional television, their 92.1 million current subscribers pale in comparison to the 1 billion daily users and 1.5 billion active accounts boasted by Facebook. While it’s hard to say how many of these people will be using the new Facebook Live app in the future, their vastly superior quantity means that, if Facebook were to dedicate themselves to the business of broadcasting television, they or their partners would have a far greater store of viewer data to exploit when commissioning shows and content.

And now Facebook is slowly maneuvering itself into a position where it could become a provider of online television.

It appears as though Zuckerberg and his team are to attempting to grow Facebook’s video-related service to a critical mass.

For one, there is the new Live feature itself, which as a giveaway includes a guide divided into such categories as TV & Movies and U.S. News, ready for the time when such content will be widely available through the social networking site. Even if there isn’t that much to see on these channels now, a steady drip of media outlets had already begun streaming video on Facebook prior to Live’s general release, with the social-media company even paying Buzzfeed, the New York Times and various celebrities to produce exclusive footage for it. Clearly, with such introductory pushes, and with Live now being made accessible to the entire globe, it appears as though Zuckerberg and his team are to attempting to grow Facebook’s video-related service to a critical mass, whereby it can become perhaps the dominant carrier of televisual content.

If enough media companies take to Live during this initial phase, then it will be only a matter of time before Facebook adds the more substantial programming that would potentially supplant Amazon Video, Netflix and Hulu. Whether on its own or in concert with external production companies, it will capitalize on a potential, ready-and-waiting audience of 1.5 billion. By virtue of this pre-existing user base, it will deliver shows to viewers on a far greater scale than has been achieved so far, and these shows will be market-researched to the Nth degree by virtue of all the data these users provide regarding their likes and habits. As such, Facebook will offer a more accurate picture of public demand to production companies, who may also be attracted away from the likes of Amazon Video by virtue of the social networking site’s greater numbers.

And even though 320 million active users isn’t quite on the same scale as 1.5 billion, much the same story also applies to Twitter.

Both companies are ideally positioned to take the success of data-driven streaming services like Netflix to the next logical step, since they can both generate and process a much larger quantity of data than their pre-established rivals. Not only that, but they already have more users than the OTT services, users who will perhaps be seduced away from set-top boxes by the easy convenience of having all the TV they could want in exactly the same place as their cherished social media accounts.

Even more promisingly, the social element involved could be the biggest pull for viewers and production companies alike, since the public knowledge that your friends or followers are going to be watching a particular show on social media may be all the advertising this show ever needs. Indeed, it may be all the advertising Facebook or Twitter needs to make social media TV more than a pipe dream.

Simon Chandler is a music and literary critic and a news-tech-political commentator contributing to the likes of Wired, The Morning News, Left Foot Forward, Alternet and Truthout. He write music articles for Tiny Mix Tapes and The 405, and literature reviews for Electric Literature, Full Stop and The Kenyon Review. Follow him on Twitter @_simonchandler_.