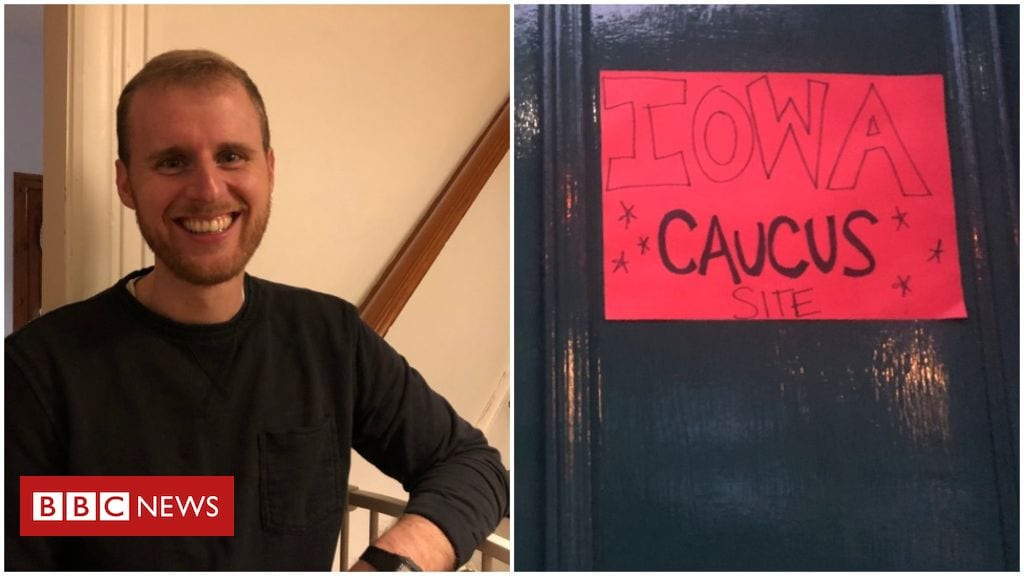 The first event that will help decide the candidates for US president takes place on Monday with the Iowa caucuses.

Groups of voters will gather across the state and vote for their preferred candidate to represent their party in November’s election.

For the first time, the Democratic Party will hold international satellite caucuses – and one of the three outside the US is to take place in Glasgow.

International satellite caucuses will also be held in Paris and Tbilisi.

He said he was looking forward to “hosting the first ever Iowa satellite caucus here in Glasgow”.

Mr Burbank is in Scotland studying for a post graduate degree at Strathclyde University.

The social work student moved to the UK for two years with his wife and daughter.

When he initially made the request to host the caucus he was expecting about six Iowan Democrats he knew to attend.

But the number of attendees has grown to 23 people – “much bigger than what I was originally expecting”, he said.

He said it was “exciting” that Iowans were travelling from around the UK to come.

Speaking to the BBC on Monday afternoon, Mr Burbank said he was decorating his flat to give it the vibe of “nostalgic Iowa” – he said this involved “a lot of corn, that’s kind of what we’re known for”, and pictures of famous Iowans, including the actor John Wayne, former President Herbert Hoover, the band Slipknot and the author Bill Bryson.

How do caucuses work?

Mr Burbank said “every state does it differently”, but an Iowan Democratic caucus was “a very public way of voting”.

The satellite caucus in Glasgow will follow the same format as the 1,677 caucuses taking place in the Midwest state will.

Registered Iowa Democrats meet – sometimes in someone’s home, like what Colyn has organised in Glasgow, or in larger public areas like schools, libraries and church halls across the state – to vote for who they want to be the Democrats’ candidate on the ballot paper in November.

They organise themselves into groups supporting each candidate – and try to convince others to switch sides.

Some of the big names attendees can support include Bernie Sanders, who ran against Hillary Clinton for the Democratic nomination in 2016, and former vice-president Joe Biden, as well as Elizabeth Warren, Amy Klobuchar and Pete Buttigieg.

If any candidate gets under 15% of the support, their supporters then pick a second choice from among the candidates who got more than 15%, or they can choose to sit out the rest.

Mr Burbank explained what would happen at his flat: “We [will] all get together – the 23 of us or whoever shows up – and we stand under a sign of the candidate that we’re supporting.

“So once we do our first alignment we’ll look at the numbers and see who’s viable, who’s not.

“We will call for a second realignment and at that time people will try to convince people from this candidate to come to their candidate instead.

“Then we’ll count the numbers,” he said.

The process in Iowa involves four stages (precinct caucuses, and then county, district and state conventions).

If he was hosting his caucus in Iowa, it would nominate someone to go to the county convention.

He will offer the attendees the option to go, but does not expect anyone to make the trip from the UK.

Instead, they will get someone else who is already at the convention to represent their votes.

The number of delegates each candidate sends to the convention is based on the proportion of support they receive in the state.

Iowa will send 41 delegates to the Democratic National Convention in July. A candidate needs more than 1,900 delegates to win the nomination.

At the convention, the candidate who wins the most delegates receives the nomination to be the Democrat’s candidate for president.

Why is the Iowa caucus important?

The Midwest state is always the first to vote, and can help shape perceptions among voters.

A win here can help give a candidate a solid start early in the race (as it did in 1976 with Jimmy Carter) and erase any doubts about their viability.

While victory in Iowa doesn’t guarantee anyone the nomination, it can help give them crucial momentum.

But the state isn’t representative of the US as a whole – it’s largely white, so the way people vote there will be very, very different than in other states.

We’re not crying, YOU’RE CRYING! Beautiful thread about a baby and the power or...

5 Household Items You Can Use As Makeup Remover When You’re Broke And Out...

New pot gym in California: How bad is it to exercise while high?