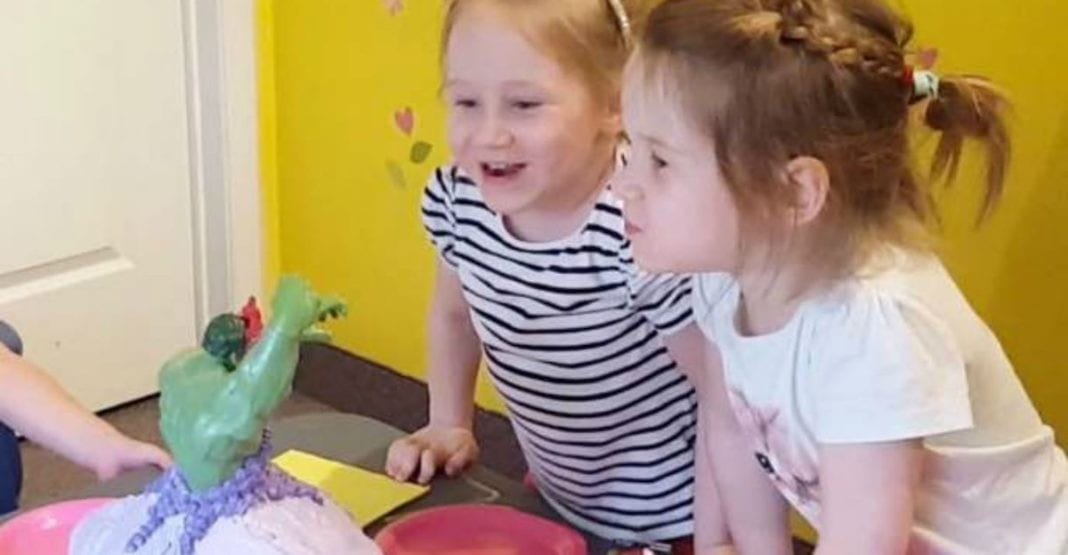 It’s time for the world to know how to make a Hulk princess cake.

The Elton family has been getting a lot of attention for this awesomely gender-stereotype-busting and fabulous DIY cake design.

Even Mark Ruffalo, Mr. Incredible Hulk himself, gave the cake an Internet high-five.

Lainie Elton, mother to twin girls who requested the princess hulk cake, designed the whole thing herself even though this was the first time she’d ever made a birthday cake!

“I had the music blasting and I was just dancing around the kitchen trying to figure out how to do this.” Lainie Elton, creator of Hulk Princess cake

Obviously, we had to get in touch and find out the details.

Are you ready for an epic no-expertise-needed DIY? Let’s get started.

Step 1: Have twin daughters. Ask them what kind of cake they want for their birthday while you’re driving home one day.

Your twins don’t even hesitate.

“I asked them what they wanted for a cake. Completely out of nowhere, one of them said ‘Hulk princess cake!'”

Ask yourself: Does it pass the giggle test?

“We’re a family that values comedy above most other things and the idea of the hulk wearing a dress was just too funny for us to not go for it.”

Step 2: Contemplate just having someone draw this hybrid hero on a sheet cake.

“They’re just really into the Hulk! And of course they’re definitely girls who love princess-y things.”

But then you go … no. I wanna do this thing.

You begin your research. You are Lainie, coolest mom. You’re doing this.

Step 3: That’s right. You’re doing this. Find the cake recipe of your destiny on the Internet.

You find Rosie of Sweetapolita, who has a great recipe for both cake and icing … yes! It’s for her “classic 3-layer vanilla bean cake with pink vanilla buttercream.”

Double the recipe even though you’re not exactly an expert cake maker. You got this.

Bake that cake in the three cake pans you have in your house: two 9×13 pans and one 9×9 pan. Sure, it might’ve been easier with round pans, but you had square and rectangular ones! You’re living your best DIY life and nothing can stop you!

Step 4: Stir in some chill parenting and some deeper thoughts on the gender stereotypes your project is busting.

And they shouldn’t have to get it.”

Step 5: Have your husband make the icing because he once got really into bread-making, so he knows how to do this icing thing.

Lainie’s husband initially posted the picture of the cake online, which began the Internet’s love story with it. And he was a big supporter of the whole process, including reminding Lainie to put icing in between the layers of cake. (She almost forgot.)

I asked Lainie why purple was her choice for the dress color:

“Well that’s kind of an obvious one. The Hulk’s pants are purple. If it’s his ball gown it must be purple!”

Step 6: Get a Hulk doll from the toy store and say “yes” to the Hulk dress.

“[Google] kept turning up She-Hulk stuff, and there was this one picture of a She-Hulk cake that was just a Barbie doll painted green. And I was like ‘Well, it’s OK, but I really want a proper Hulk action figure.'”

Get that proper Hulk action figure. Wrap his lower half in plastic wrap because he’s got moving parts and you want your girls to be able to play with this toy later and not have it be all sticky and have weird cake goo in his leg joints.

How to do this oh-so-architectural cake-stacking … it’s about seven steps:

Step 7: Begin sculpting the layers and the dress.

Get out your lazy Susan and your serrated bread knife. It’s time to get all Michelangelo up in here!

You’re going to want to reduce the ridges as much as possible from the outset. Just cut diagonally along the edge of the dress to make it as smooth as possible.

Then, it’s time to learn a new technique the “crumb layer.”

The crumb layer is what gives the cake that smooth look. It’s crumbs and icing put together to form a molding paste.

Take the cake bits you cut off when you were making the dome, crumble ’em up, and mix with some icing until you have a nice paste going. You want it to be somewhere in between Play-Doh and rubber cement but more delicious!

Start with the dress waistline. Make a slope with your crumb layer that goes up to the Hulk’s natural waist.

Now fill in any other gaps with your crumb layer. Then, apply a thin layer of icing all around the Hulk’s skirt!

Put your Hulk into the freezer for around an hour. You want the crumb layer to get firm. Then, it’s time to get icing!

Step 8: Full-on ice the dress. Time to get all Project Runway and make it werk!

For the skirt, ice as normal. Then take the back of a spoon and make beautiful diagonal ripples. What movement!

Now, get out a piping bag with a star attachment to make the bodice. You might’ve forgotten that the bag needs chilled icing in order to form perfect stars, but what is perfection anyway???

Sure, the Hulk is known for his torn-up clothing.

GIF from “The Avengers.”

When he gets all Hulk smash, he doesn’t have time to change, so he never gets the chance for that Old Hollywood glamour! Well, that ends here. This Hulk dress fits!

Step 9: Contemplate how the Hulk would accessorize. Say yes to a tiara, no to the necklace.

Find a hot pink tiara from a Rapunzel doll and attach with a hair elastic. Now for the jewelry debate:

“He almost had a necklace, but I thought that would be too much. I wanted to show off the sweetheart neckline! I was just thinking, what would I do with myself here? I would wear dangly earrings. But I couldn’t make that happen on The Hulk, so I decided to go bare.

Step 10: Give the cake to your kids, who are excited. And kind of amazed.

They’ve known their mom for four years. They just didn’t know she was capable of this.

Step 11: Eat the cake and celebrate your cool family being so darn cool and making fun DIY cake art that makes people smile AND think!

Even Mark Ruffalo (yes, Mark Ruffalo) took time out of his busy “being the coolest Earth-advocate on Earth” schedule to show the Hulk princess some love.

So, there you have it. Adorable, right? No wonder the Internet is in love. But there’s more!

As soon as I was done talking with Lainie, she sent me a photo. The girls’ grandparents decided to get involved in the DIY game and made the girls …. a Hulk princess doll!

Lainie’s hoping to see a line of Hulk princess Halloween costumes this year.

Guess Which Celebrity Is Launching A New Line Of Wines Just In Time For...

Rejected from job after job, this baker with Down syndrome opened her own shop...

All the Christmas movies coming to Netflix in 2019

How to cook the perfect onion tart – recipe | Felicity Cloake