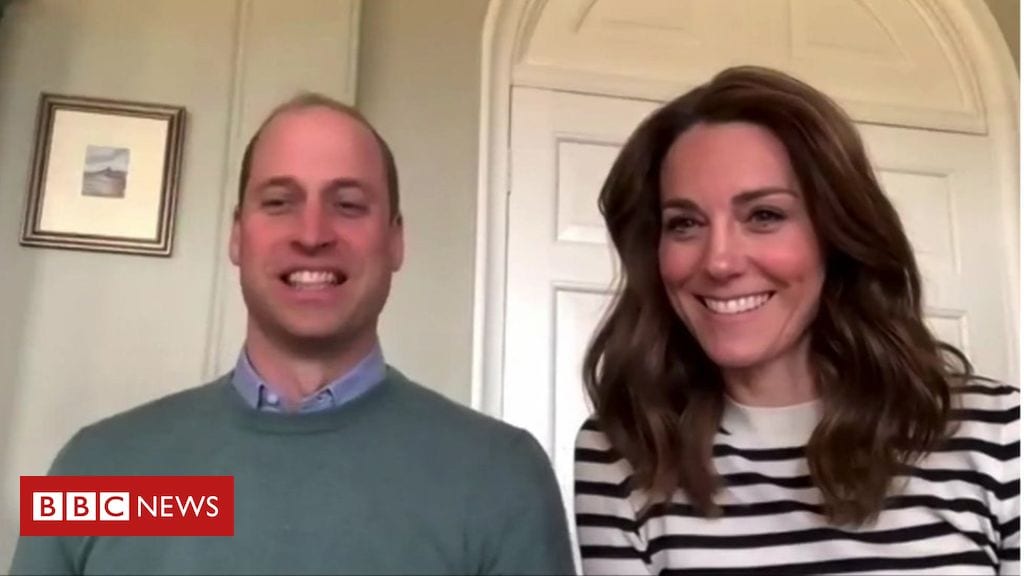 In a wide-ranging interview with the BBC about the coronavirus pandemic, the Duke and Duchess of Cambridge described how the three-week lockdown had been “frustrating” for many people.

But they also spoke about what life has been like for them during the lockdown, and the positives they’ll take away from these unusual times.

From baking with the kids and Joe Wicks workout videos to technical glitches on video calls with other royals, here’s what we learned from the interview.

1. They’re adjusting to having the kids at home

“The children have got such stamina I don’t know how,” says Catherine, adding that she has found tips online for fun activities to do around the house.

“You pitch a tent, take the tent down again, cook, bake. You get to the end of the day and they have had a lovely time – but it is amazing how much you can cram into one day, that’s for sure.”

It’s unclear how much help the duke and duchess have when it comes to looking after their children, but they say they are homeschooling Prince Louis and Princess Charlotte themselves during lockdown.

And Prince William sums it up as “fun” – prompting a glance from Catherine.

“We don’t actually tell the children we’ve actually kept going through the holidays. I feel very mean,” she says.

“Someone gave me some very good advice pre-the holidays to put in some structure. There’s a pretty strict routine here at home that’s massively helped us all – just having a bit of routine, [a] bit of normality. But it is unusual.”

3. They’re grappling with how to tell the kids what’s going on

Catherine says adults shouldn’t underestimate how much children take in about the pandemic.

“You can’t ignore it. And also you don’t want to sort of scare them and make it too overwhelming,” she says.

“I think it is appropriate to acknowledge it in… age-appropriate ways to try and help them through it, because these are not normal circumstances and they’ll definitely pick up on that.”

4. Chatting to the family comes with its technical difficulties

Prince William says the royals are getting used to speaking via video calls without “dropping the computer halfway through”.

“It gets a bit hectic, I’m not going to lie, with a two-year-old you have to take the phone away,” Catherine says.

William adds: “He always wants to press the red button.”

Kate laughs. “It’s quite hectic for them all to say the right thing at the right time without pressing the wrong buttons. But it’s great and it’s nice to keep in touch with everybody.”

5. They worry about their loved ones

Prince William also speaks about how he felt anxious for his father, Prince Charles, when he tested positive for coronavirus after having mild symptoms.

“I have to admit, at first I was quite concerned, he fits the profile of somebody, at the age he is at, which is fairly risky,” he says.

But he says Prince Charles has experienced many chest infections and colds before, so he felt optimistic he would recover.

He adds that his father found not being able to go for walks challenging, and that the family is doing “everything we can” to protect his grandparents, the Queen and the Duke of Edinburgh.

6. Exercise is a struggle

William jokes that running around after the children has kept them busy – but says they haven’t done as much exercise as they would have liked.

“We’ve been for the odd walk, the odd bike ride as well. So we keep the children busy and active and healthy,” he says.

“We haven’t quite done the Joe Wicks workout that everyone else seems to be doing although we are not far off. That might happen at some point.”

7. The positives of working from home

William says he thinks a reduction in travel around the world will have made a “huge difference” to the environment. And he hopes that, once the pandemic eases, businesses will choose to hold more meetings by video, rather than face-to-face.

“I’ve always thought that was lunacy, really… Why on Earth we do that when we’ve got the technology nowadays to do things? Why don’t we conduct more business at home?” he asks.

He acknowledges that many businesses rely on face-to-face meetings, but hopes that more people will challenge their attitudes to travel after the lockdown ends.

8. They’re making the most of family time

The duke and duchess say the lockdown has given them time to focus on relationships with friends and family.

Prince William says he knows there will be a lot of people in “very different circumstances” where “a lot people are living in one house and… getting on top of each other”.

“For the vast majority of people, I hope we could take positives out of this and realise that… we won’t get this whole time again,” he says.

9. And they, too, are still getting through Easter chocolate

“Honestly, it is stashed in every little corner around the house,” says Catherine.

Vinícius Júnior: the £38m teenager who hasn’t actually done anything yet | Barney Ronay

Jimmy Kimmel Will Host the Oscars: a Boring, Perfect Choice

5 Of The Most Divine Potato Recipes In Existence