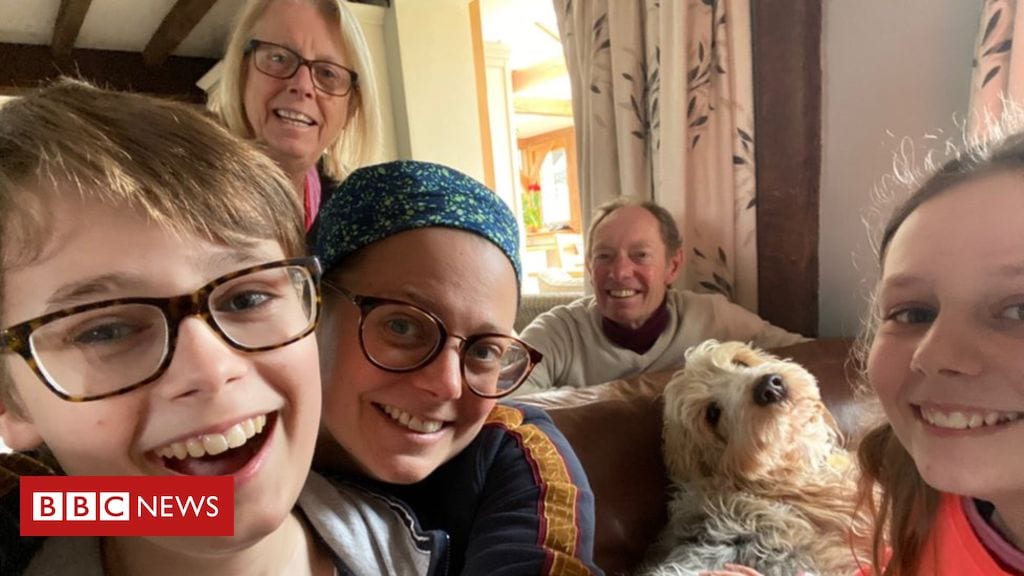 It has been 15 years since Jen first moved out of her parents’ house – but now because of coronavirus three generations are living under the same roof.

The outbreak has seen many families unexpectedly brought back together – from young professionals returning home after losing their jobs to people moving in to look after elderly relatives.

For Jen the decision was a tough one – and meant she and her children were separated from her husband.

Her underlying health conditions mean she is at increased risk from Covid-19 but her husband’s job with the Met Police makes him more likely to catch the virus.

“He’ll be going in and out of London, visiting hospitals, prisons, people’s homes – it was just too much of a risk,” the 37-year-old says.

So after self-isolating for two weeks – while her husband stayed in a hotel – Jen and her two children moved in with her parents, who live a short drive away in Buckinghamshire.

Five days in, Jen says the family have avoided any major arguments so far – although having two children in the house has taken a bit of getting used to for her parents.

“My dad did set some jokey house rules about being tidy and we’re asking the kids to help out around the house more than they normally would,” she says.

“But inevitably there’s going to be times when it gets fractious and claustrophobic with so many of us in the house together.”

The outbreak has also cut short university terms for students across the country – with many returning home early as a result.

When rumours of a lockdown first began, Kevin, who was studying at the University of Greenwich in London, decided to travel home to Northern Ireland, worried that flights could stop at short notice.

The 19-year-old also had financial concerns and knew he would be able to save money on food by going home to live with his foster mum.

Adjusting to life back at home in a rural area of Northern Ireland near Newry has been difficult.

“It was a massive shock coming back from London,” he says. “I don’t think it really hit me until I actually got home.”

Because his foster mum is in her 70s, he has also been self-isolating to reduce the risk of her catching the virus.

“Obviously I can call my friends but with just the two of us in the house it can get lonely after being used to having loads of people around at university,” he says.

“It was difficult seeing everyone go home to their brothers and sisters whereas in my house it’s just me and my foster mum.”

There’s also the disappointment of missing out on the end of term and other university activities. A trip to Japan for a conference has been cancelled, while Kevin’s other summer holiday plans have been put on hold.

Angus, 25, was also worried about being confined to his flat on his own.

He normally lives in London with a friend but when his housemate decided to self-isolate with her boyfriend he chose to move back to his parents’ house just outside Manchester.

While he admits having access to a garden and someone who is willing to do his washing is a plus, losing some of his independence has taken a bit of adjusting to.

“It’s weird because there’s not a total loss of freedom but at the same time you have to kind of justify what you’re doing with your own time in a way you don’t when you live alone,” he says.

Finding time for himself has also been a challenge – with his mum wanting to join his remote yoga class and his dad asking him to walk the dog when he is busy with work calls.

But generally Angus has enjoyed being able to spend more time with his parents so far.

“It’s quite nice because when you just come back for a weekend you have all these grand plans but never quite realise them,” he says.

“Me and my mum are both avid bakers and we always say we’re going to bake when I come home but we don’t always have that much time.”

However, being stuck in the house they’ve had plenty of time to bake fresh bread and have done a virtual pub quiz together.

For Stacey and her daughter, moving in with Stacey’s mum, who is in her 80s, was less out of choice than necessity.

The pair, from north London, moved in at the beginning of March because Stacey, 55, had sold her house and was waiting to finalise buying a new property.

However, after the UK went into lockdown the process was put on hold and there is little chance they will be able to move any time soon.

Rather than weeks the family are now looking at potentially months living under the same roof.

“I’m used to running my own house so I did think it was going to be really hard,” Stacey says.

For her 15-year-old daughter sharing a room with her mum has been difficult but so far she’s been keeping busy with school work.

Despite the stressful situation, Stacey says it has been “blessing in disguise” for her and and her mum to be able to keep each other company, especially after Stacey was furloughed from her job at an opticians.

“Maybe it’s what we needed to bring us all a bit closer together?”

Tour de France: Thomas rides on but Fuglsang out after stage 16 crashes