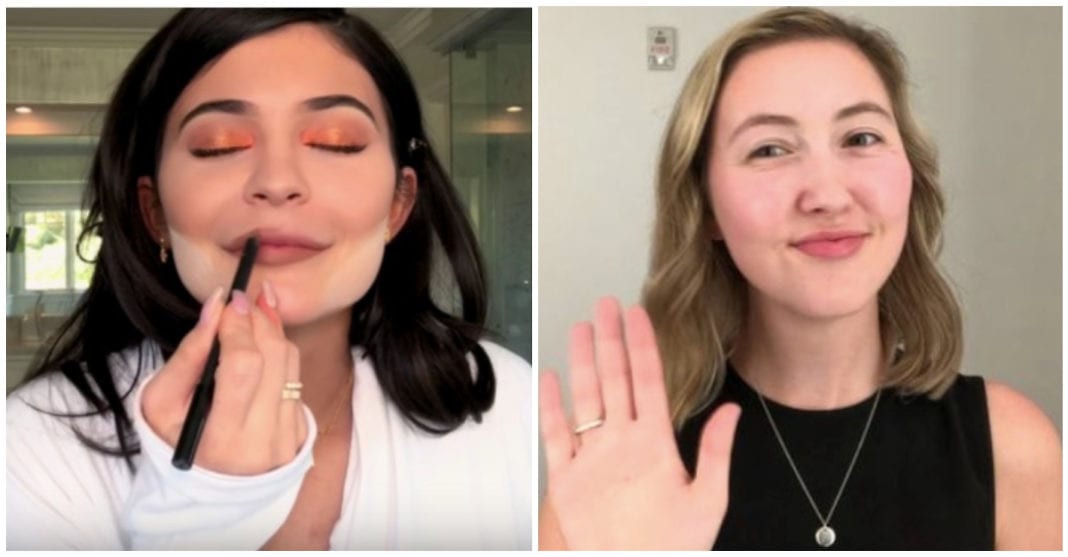 The Kardashian/Jenner clan is certainly well known for looking flawless 24/7. In fact, they’ve managed to create several makeup and beauty lines to help all of us look just as good. I guess we’re supposed to ignore all the plastic surgery and professional beauty assistance they have, right?

However, to prove that she can do it on her own and that you can, too, Kylie Jenner released a 37-step makeup tutorial video for Vogue to show you how to get her look. I don’t know about you, but that’s about 28 more steps than I would ever do!

So before we get into it, check out Kylie’s makeup tutorial in the video below:

It’s also a lot more steps than Emma, a news writer at Cosmopolitan, is used to doing, too. She confesses that she’s not great with makeup, but considering Kylie breaks down every step, she decided to try out her tutorial for the sake of her readers.

Well, the results did not turn out quite as Kylie intended. There was a lot of foundation, tons of highlighter, and so much blush. It took Emma 45 minutes to get through the entire process and ended up looking like “a toddler who’s been let loose in a Sephora”.

Emma began the tutorial with a moisturized face and “a little bit of chapstick”. She then tried to recreate the sparkly summer eyelids that Kylie effortlessly made in her tutorial – and this was the first hilarious sign that things were not going to go to plan.

Contrary to what these pictures suggest, Emma was genuinely trying to create the same shade of orange as Kylie.

Next up was Kylie’s foundation, and one thing’s for sure, for a girl who wants to still have her freckles showing, she wears A LOT of it, and Emma was left “wearing the most foundation I’ve ever worn” because she usually only wears two pumps of color correcting cream.

Needless to say, as the world’s youngest billionaire (yes, really), Kylie used the tutorial to showcase a number of products from her makeup line. However, fret not if you’d like to have a go at Kylie’s tutorial yourself and don’t have the products to do it.

The YouTuber in the video below demonstrates video how you can recreate Kylie’s look using only drugstore makeup:

After showing people these steps, Kylie then demonstrated how she “bakes” her face.

Sadly, this did not involve any actual baking, even though following this many steps looks like hungry work. Instead, Emma had to place powder makeup on her chin for 10 minutes and allow it to set so that she could achieve a flawless finish to her look like Kylie.

While she was waiting on her chin to bake, Emma recreated Kylie’s infamous pout.

It’s no secret that Kylie loves going overboard in this department, and this meant that Emma had to line her lips, then fill them before applying lipstick. She also had to put on a layer of lipgloss for good measure. Well, they never said that looking like Kylie would be easy!

“During this part of the video, [Kylie] tries to act cool by lining her lips with her eyes closed. WELL, jokes on you Kylie because I can do it, too!!” Emma joked.

At this point, Emma starts to feel like she looks like Kylie and says to herself “I am Kylie, Kylie is me,” however, her confidence does not last for long as the makeup mogul’s heavy application of blusher heralded the beginning of the end for this brave Cosmopolitan soldier.

Why? Because Kylie doesn’t just apply blusher to her cheeks. Oh no, she applies it, quite literally, everywhere.

Unlike most people, this wasn’t followed by any form of blending. Kylie just lets her highlighter sit there.

Emma then tried to spruce up her face so that she could finally inspect the final product… And let’s just say, she wasn’t happy with the result.

Kylie may be a pro, but we regular women out there are going to need more practice to wear that much makeup on a daily basis, or, you know, we could just pop on a bit of mascara and lipstick and actually still look like our natural selves. There’s nothing wrong with that!