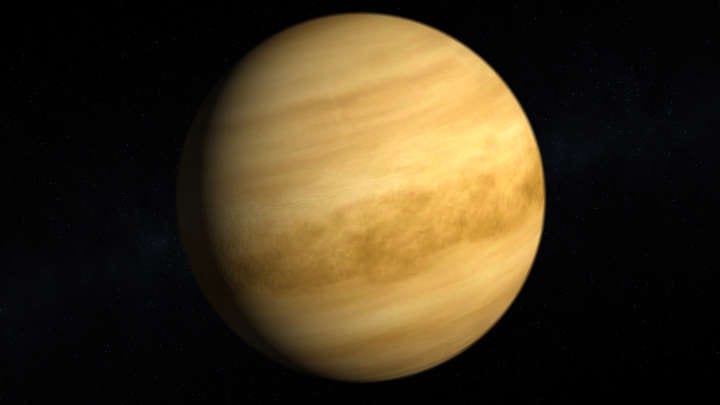 A new study, led by the University of Wisconsin, Madison (WISC) has reinvigorated the debate on whether or not alien life could be found in the clouds of Venus, a planet famed for its environmental extremes.

Writing in the journal Astrobiology, the team suggest that future space missions should target the lower cloud layer of our sister world for exploration, noting that its moderate temperatures (60°C/140°F) and pressures, along with the presence of sulfuric acid aerosols, make it an “exceptional target”.

Comparing the spectral (light-interacting) properties of this cloud layer to materials found on Earth, the team suggest that the soup over there is sufficient “to harbor microorganisms,” so much so that any biomass there could potentially “be detected by optical methods”.

The search for extraterrestrial life within our Solar System tends to eschew Venus, and instead focused on a handful of candidates: Mars, Jupiter’s moon Europa, and Saturn’s Enceladus. It’s deeply uncertain whether or not microbial life exists on these celestial spheres, but their similarity to some of Earth’s extreme environments – which are often populated by microbes – suggests it’s indeed possible.

Venus, however, has been suggested before. Yes, the surface of Venus has an air pressure of 90 times that of ours, and we’re certain nothing could survive baking under temperatures of 465°C (870°F) – but the skies are a different story.

As noted by the international team of authors behind this new paper, it was first brought up by none other than Carl Sagan, along with famed biophysicist Harold Morowitz, in the 1960s. Writing in Nature, they surmised that “while the surface conditions of Venus make the hypothesis of life there implausible, the clouds of Venus are a different story altogether.

“Water, carbon dioxide and sunlight—the prerequisites for photosynthesis—are plentiful in the vicinity of the clouds,” they noted, adding that the Earth-like atmospheric pressures and temperatures there are fairly reasonable for microbial life. “It is by no means difficult to imagine an indigenous biology in the clouds of Venus.”

This new study doubles-down on such lines of reasoning, and zeroes in on dark clumps within the clouds, whose spectral properties are somewhat enigmatic. They were first observed around 100 years ago, and even now it’s unclear what they consist of; nevertheless, this study attempts to use pre-existing data to delve deeper into what may be hiding within them.

Based on what probes and telescopes have observed, they’re likely rich in tiny sulfuric acid droplets, but the team note that no-one’s quite sure what else is in there absorbing ultraviolet light. Although other chemical species are candidates, microbial life and their byproducts are also suggested, including photosynthetic pigments.

In fact, based on biological materials suspended in Earth’s atmosphere, as well as the moderate environmental conditions in Venus’ lower cloud layer, the team propose that it’s entirely plausible that “the clouds may similarly harbor suspensions of single cells or aggregated microbial communities.”

There’s no direct or even indirect evidence that this may be the case. After all, the team says that no in-depth studies on the spectroscopy of floating microorganic matter of any kind has been conducted with Venus in mind.

This means that the mysterious dark clumps could contain biomass fragments, or they could just be innocuous chemical compounds unrelated to life. This study simply suggests that it’s not unreasonable that the more exciting alternative hypothesis is worth investigating.

Although we simply can’t tell the difference between the two on a spectral level just yet, lead author Dr Sanjay Limaye, a senior scientist at WISC, suggested to IFLScience that this may soon change. He explained that NASA’s considerable contraption, the Glenn Extreme Environments Rig (GEER), is “designed to simulate Venus surface conditions, but a pre-chamber is also being added where the atmospheric chemistry is prepared to inject into the main pressure vessel.

“This pre-chamber is where the cloud conditions on Venus can be simulated to conduct tests on microorganisms to obtain their spectral properties.”

Apart from creating laboratory-scale cloud chambers on Earth to test their idea out, the team rightly point out the only way to know for sure is to boldly go into the Venusian skies and find out for ourselves.

They came, they camped, they baked at Death Valley … on purpose