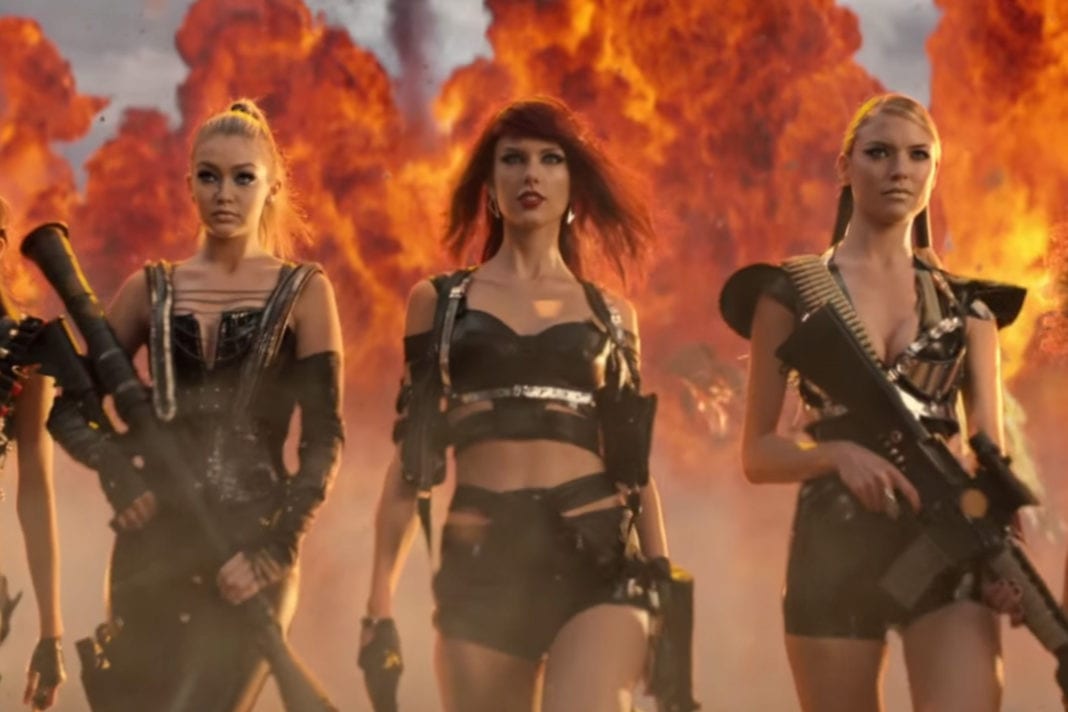 Sunday nights VMAs promise to be chock full of delightful surprises. Who will wear a dress made entirely of zippers? Which Teen Wolf will be spotted pawing at which Disney starlet? Are we old? And is Harry Styles even coming? But one thing is for sure: Taylor Swift, who is nominated for nine Moonmen, is sure to take home at least one award for her Katy Perry power pop fatwa, Bad Blood.

When Bad Blood first debuted on Swifts album 1989, it was immediately clear that the aural F-you was addressed to fellow pop star Katy Perry. Swift, that lanky, doe-eyed piece of Wonder Bread, confirmed to Rolling Stone that the track was, in fact, a diss song. She then teased the identity of her frenemy, the elusive chanteuse: For years, I was never sure if we were friends or not. She would come up to me at awards shows and say something and walk away, and I would think, Are we friends, or did she just give me the harshest insult of my life? She also added that this mysterious, no good, very bad pop star basically tried to sabotage an entire arena tour. Any idiot with Google access and too much time on their hands (in this scenario, me) knows that Perry allegedly poached a gaggle of Swifts Red tour backup dancers. Perry also tweeted an inflammatory Mean Girls reference about Swift, and they both used to bone John Mayer. Youre killing it, ladies!

If you need any more proof that Bad Blood is definitely about Perry, or if you just want to remind yourself that print journalism isnt dead, you can check out The Washington Posts dissection of the diss track, which traces the singers descent from mad love to bad blood. Truly harrowing stuff from the paper that broke Watergate.

The main narrative about Taylor Swift post-Red is that the singer is more empowered than ever. Were living in the heyday of the Swift wave of feminismgo girls, no boys allowed, etc. Its the kind of wave you ride in a highwaisted retro bikini next to your 10 most flawless, expertly cast model friends, before taking a series of artful Instagrams on your private beach. Taylor Swifts brand of feminism is like that time your friend told you that One Direction was going on hiatus and you pretended that you were only tearing up because something was stuck in your eye. In other words, unbelievable and contrived.

After all, this is the mass-market songstress who refused to call herself a feminist back in 2012, insisting, I dont really think about things as guys versus girls. I never have. I was raised by parents who brought me up to think if you work as hard as guys, you can go far in life. That might feel like a while ago, but not much has changed. Obama is still president, nobody knows if theres going to be an Arrested Development movie, and Taylor Swift is still misinterpreting the feminist movement.

Its not like Swift isnt trying. She eventually apologized for the remarks she made as a teenager (she was 22), explaining that, For so long its been made to seem like something where youd picket against the opposite sex, whereas its not about that at all. Becoming friends with Lena [Dunham]without her preaching to me, but just seeing why she believes what she believes, why she says what she says, why she stands for what she stands forhas made me realize that Ive been taking a feminist stance without actually saying so.

While were all happy that Taylor Swifts found her feminist spirit animal in Lena Dunham, her current feminist scorecard is as unconvincing as a Dr. Dre apology. After Amy Poehler and Tina Fey made a joke about Taylor Swifts love life at the 2013 Golden Globes, Swift struck back with a Madeleine Albright quote (by way of Katie Couric, of course)Theres a special place in hell for women who dont help other women. For some reason, hanging out in hell with Tina Fey and Amy Poehler sounds like way more fun than hanging out with Taylor Swift IRL, pretending we hate boys and trying to hold a conversation with Gigi Hadid.

Swifts feminism is like a malfunctioning Pokmonsomehow managing to simultaneously evolve and get worse. When not damning beloved female comedians for doing their literal jobs, Swifts feminism can be seen taking the form of white solipsism. When Nicki Minaj called out the VMAs for failing to give her Anaconda a Video of the Year nod, Swift chastised Minaj for complaining about the success of other women. Seriously, Taylor, why did you do that? While Minaj was making a substantive point about how the music industry undermines black female greatness, Swift essentially blew up the constructive conversation by insisting that Nickis tweets were a personal attack. Swift, whos never met a white size zero model she didnt Instagram with, didnt need any help confirming that her specific brand of femininity isnt exactly inclusive. The problem here isnt that Swift is whiter than Ed Sheeranits that, despite her stated boner for feminism, she couldnt even bother to finish reading a black feminist sentiment without tweet-shouting me, me, me! like a middle child on a sugar high. Sorry, Taylor, but Madeleine Albright never said, if youre a woman and I think you dont like me then youre not a feminist. Katie Couric wouldnt even say that.

Swifts brand of feminism is less an intersectional approach to structural systems of gendered inequality and more look at my friends, theyre hot and they like me. A Telegraph description of Swifts social media-ready lady relationships reads like friendship goals on crack cocaine: she has recruited a squad of high-achieving close girlfriends, and spends what little downtime she gets baking with the supermodel Karlie Kloss, strolling around New York with the Girls actress and writer Lena Dunham or, as her recent Instagram posts indicate, whale-watching in Hawaii with the indie band Haim.

When not whale-watching with the indie band Haim, Swift can be found saying things like, We even have girls in our group who have dated the same people. Its almost like the sisterhood has such a higher place on the list of priorities for us… When youve got this group of girls who need each other as much as we need each other, in this climate, when its so hard for women to be understood and portrayed the right way in the media… now more than ever we need to be good and kind to each other and not judge each other. In addition to reminding everyones ex-boyfriend Joe Jonas that he is utterly replaceable, this Swift-ism reinforces Swifts fatal mistake: believing that by simply having a group of friends, she has cracked the feminist code. Someone should let bell hooks and Gloria Steinem know that they could have avoided an entire lifetimes work of critical thought by consoling Selena Gomez after her breakup or baking gluten-free cookies for Martha Hunt!

Since Swifts crew is all about positive reinforcement, Bad Blood, in which Swift gathers her fatal posse to gang up on a lady traitor, strikes a hypocritical chord. Swift can write a great hook, and watching a woman dominate the music industry is empowering in its own right. But Swifts Perry-takedown isnt just coldits also totally off-message. Swift has built her new brand on girl power so extreme, shes been known to personally pick out gifts for her lady fans based on extensively stalking their social media feeds. Between the #squadgoals Instagrams and the borderline #cultvibes of her teen-friendly PR campaign, Swift is the last artist who should be releasing a video that looks like an ad FOR cyberbulling. As Perry herself noted during the great Minaj/Swift debate, Finding it ironic to parade the pit women against other women argument about as one unmeasurably capitalizes on the take down of a woman Camilla Belle, the rumored subject of Swifts Better Than Revenge, tweeted that she couldn't have said it better Oh, Taylor What Would Katie Couric Say?

Swift insists that her feminism is more than just some strategy. After all, no woman accused of practicing non-inclusive feminism would go from featuring Victorias Secret models on stage to trotting out a diverse list of stars from Uzo Aduba to Ellen DeGeneres to Andreja Pejic to Mary J. Blige. That would just be too transparent, right? As grateful as we all are for this video of Taylor Swift performing Trap Queen with Fetty Wap, its going to take more than a flicka da wrist to make Swifts public image problems magically disappear. No one has the right to take a celebritys feminist affiliations awaytheres no such thing as a perfect feministbut its sure going to be strange to watch girl power Swift take home an armful of VMAs for her girl-bashing music vid.

Or as Nicki Minaj would say, Series of smirking side-eye emojis.

What’s happening on Hulu this July

Scientists Hope That Broccoli Lattes Could Soon Be A Thing But Why?