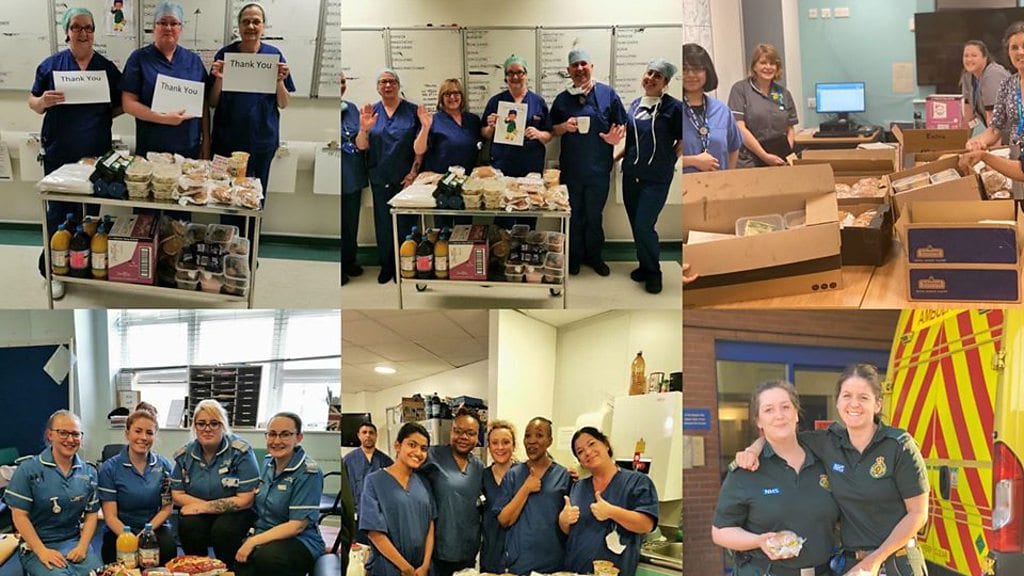 Restaurant staff have been forced to shut up shop while NHS workers have sometimes finished gruelling shifts only to find supermarket shelves empty. We meet the chefs on shutdown volunteering to feed hospital workers around the clock.

Kelly Iles, from The Barn Kitchen in Coventry, has delivered more than 3,500 meals to NHS staff at two hospitals in Warwickshire and said she had never been more proud of anything she had done.

“You see how grateful these nurses are,” she said. “You pull up into a car park and you see 10, 15 ambulance drivers who are there saving lives, keeping us going.”

Mrs Iles used food from her closed venue, while more than 700 people have paid for meals for doctors and nurses via a link on her website.

“I’ve wiped out my entire business stock but I don’t care,” she said. “I’ve accepted that I no longer own a restaurant.

Owner Rich Carver told Altrincham Today: “Andy dropped 30 meals at ICU at Stepping Hill yesterday and made a ward full of nurses cry they were so grateful. Really, it’s the least we can do.”

Jess is baking for our NHS Heroes 💙

“I can only make so much so I’m just doing my bit to say thank you,” she said.

An Indian restaurant in Shifnal, Shropshire, has delivered dozens of curries to night staff at the Princess Royal Hospital in Telford.

East End Balti posted on Facebook that staff wanted to do this every Monday as “a little gesture to show how much we appreciate the NHS, the true heroes of our country”.

Francesca Price posted photographs of staff receiving their meals and said a “massive thank you” for the delivery.

All money raised goes to local businesses who will then prepare and deliver food to the hospitals, meaning the scheme provides meals for health workers but also helps restaurants and caterers who would be faced with a loss of business during the current crisis.

So far about 66,000 meals have been delivered to NHS staff, the charity said.

Yorkshire’s famous tearooms, Bettys, made sure unsold bread and cakes did not go to waste by sending them to local NHS staff at the weekend.

The group decided to close its cafes in York, Harrogate, Ilkley and Northallerton.

Zoe Beedham, deputy branch manager at Bettys in Ilkley, sent supplies to the staff at Airedale Hospital in Steeton.

“We wanted to help support the amazing key workers, like those in the NHS, who are working so hard to look after us all,” she said.

“So, we put together a care package of Fat Rascals [a type of scone], bread and treats in an effort to deliver a bit of cheer to the hospital staff.”

Colmans Seafood Temple in South Shields posted on Facebook: “Our last delivery is on us, almost 200 meals all to the wonderful staff of South Tyneside Hospital who are working tirelessly to help fight this virus for everyone.”

Vermilion restaurant has been delivering meals to North Manchester General Hospital. A tweet from the restaurant said: “We salute the heroes of our NHS who are making a huge contribution in this time of crisis.”

A family massacre disguised as a massive fire in New Jersey