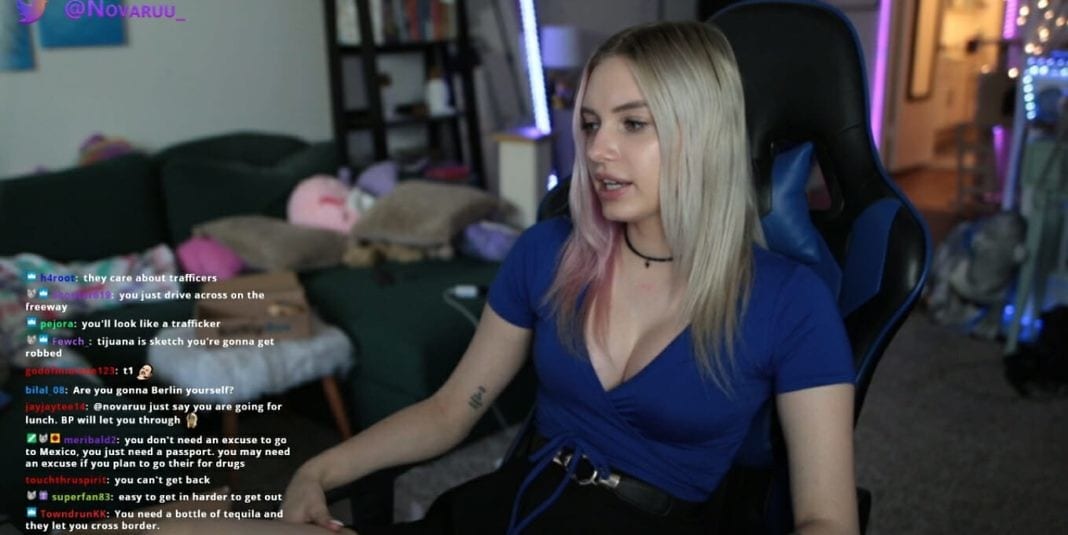 Be careful what you talk about on .

Novaruu is in hot water after clips of her describing federal crimes she said she committed surfaced on Monday. According to the stream, Novaruu finds particular pleasure in smuggling drugs. She admitted on-stream to smuggling a number of illegal substances over state and country borders.

The Finnish streamer admitted to these crimes in a Monday stream, which quickly shot to the top of Reddit’s u/LivestreamFail. “I’ve smuggled weed into Arizona and back, I smuggled shrooms from New York to here, I’ve smuggled Xanax all the way from Mexico to L.A.,” Novaruu said. “I’d do it again, it’s fine.”

Novaruu is casually dismissive of the admissions. “I get off on like, smuggling drugs,” she said. The confessions came while she was enjoying a relaxed chat with her subscribers. Streamers often joke with their followers, so it’s not entirely clear how serious she was about smuggling drugs, to begin with. The conversation on Reddit, however, indicates it is far from the first time the streamer has made such claims.

“She was talking about illegally smuggling drugs like a week ago when I was in Cali,” a redditor who goes by Gengar11 commented. “I think she likes talking about doing it as much as she likes doing the act itself.”

Novaruu denied the claim. “You are claiming I was talking about smuggling drugs in person a week ago which simply didn’t happen,” she apparently replied on Reddit.

Others pointed out that a crime is a crime, whether it’s easy or even harmless.

More than anything, commenters agreed that Novaruu admitting to her crimes mid-stream was a poor choice. “Imagine being so stupid to say these things in a Livestream,” one commenter said. Other commenters teased the original person who flagged the situation for “snitching” on Novaruu.

Between her comments and the general disregard shown by her followers, it doesn’t seem like Novaruu is taking the blowback very seriously. Next time, however, she might want to avoid talking about it to her upward of 50,000 followers.

We’ve reached out to Novaruu.

Rachel Roddy’s recipe for cannoli | A Kitchen in Rome