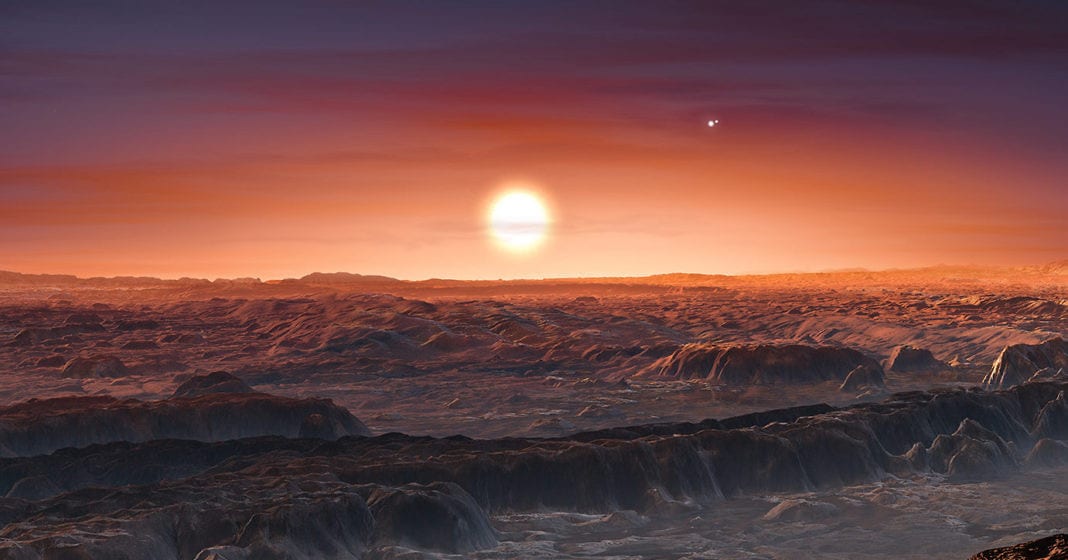 In case you werent on Earth on Wednesday, heres what you missed: Astronomers found a planet as close by as a planet could possibly be—in the nearest star system, Alpha Centauri. The planet, called Proxima Centauri b, orbits its star every 11.2 days. That puts it in the habitable zone, where liquid water could (could) exist on the surface. And its massaround 1.3 times Earthsmeans it could (could) be rocky. Cue press-release proclamations like New Earth-like Planet Found.

But hold up just a second. Astronomers have found other quote-unquote Earth-like planets in the habitable zone in recent years. According the Planetary Habitability Laboratory at the University of Puerto Rico, there are 15 Earth-size (in terms of mass or radius) potentially habitable exoplanets. And while, yes, Proxima Centauri b has the mass closest to Earths so far, its other characteristics may not be very earthy.

What this planet really has going for it over its competitors—why it’s getting so much attention—is location, location, location. Just like the closest supermarket to home is probably the one you go to the most frequently (even if its produce is always a little bit funky), Proxima Centauri bs neighborhood heightens scientists perception of its value. Which, let’s remember, is still in question.

First off, scientists only know Proxima Centauri bs minimum mass—the smallest it could be—and they dont know its radius, which means they actually dont know if its rocky or not. Remember we only have a minimum mass for the planet! astronomer Elizabeth Tasker wrote on Twitter. By those stats, I’m a twin of most life forms on Earth!

Plus, the star blasts the planet with high-energy radiation, perhaps baking away all the water long ago. If hydration did survive, it likely only lives in the most sunlit areas. And while warm enough to have water or not is a valuable binary, it doesnt equate to actual habitability.

Rory Barnes, an astronomer at the University of Washington, developed a metric called the Habitability Index, which ranks potentially nice planets with more nuance. Hes not hopeful. I am pessimistic about any planet being habitable because so many requirements need to be met, he says. But Proxima gives us a great chance to find out if I’m right or not.

Its all in your head

In light of all this uncertainty, the squee over this planet feels premature, or even just outright incorrect. But the squee is definitely there.

I was really surprised when I read the European Southern Observatory article that was pretty clearly saying, This is the most Earth-like planet weve found to date, says Lisa Messeri, an anthropologist at the University of Virginia, despite the fact that in the very same release it said there are no seasons, its an 11-day year, the sky would be red, and Proxima Centauri is an active star with solar flares. So in other words: not a very habitable world at all.

Messeri doesnt study exoplanets. She studies the people who study planets—has shadowed and interviewed them for years. Her book Placing Outer Space is the result of that research: a look at how astronomers mentally transform planets into places.

The reaction to this new discovery, she says, has to do with how much more real Proximas proximity makes it seem. The reason we care about planets is because they are places we can imagine going to and being on, Messeri says. For most planets, thats all well ever do—imagine. But Proxima Centauri b is the first exoplanet that is also a physical destination.

Terrestrial geography affects our perceptions in the same way. We feel connected to places that are close to us, because we can go to them for a weekend, says Messeri. Even though Im not going to New York on Saturday, the fact that I could makes it feel more like a part of my world.

While scientists arent going to Alpha Centauri on Saturday, at least as far as we know, they do intend to make the trip. The Breakthrough Starshot initiative, announced in April, plans to send a postage-stamp-sized probe there. At the time of the Proxima announcement, the project hadnt chosen which star in the triple-system to visit (the top pick seems pretty clear now).

Talk of interstellar space travel—as a real thing that will happen—still sounds pretty fringe, though. And scientists, wary of seeming un-serious, sometimes distance themselves from that. But now theres a news peg, and a place they can point to, says Messeri. With that, they feel more comfortable passionately and publicly proclaiming interstellar intentions.

The new planets closeness also makes the search for alien life more concrete. Heres a real star, a real Earth-ish habitable-y planet, real close by. If a Contact-like signal came through, I bet you a million dollars (Im good for it, promise) that the governments of the world would come together to send some people there. Because a crewed interstellar journey to Proxima is the cosmic version of Messeris weekend New York trip.

Sending an interstellar message to aliens, rather than waiting to receive one, has historically felt like a philosophical exercise. The message could take generations+++ to arrive at its destination, as would a hypothetical response. But with Proxima, we could finally have something like a real conversation with an alien, with the usual give-and-take that happens when we meet a stranger, says Douglas Vakoch, head of METI International. In less than a decade, we could send a message and receive a reply from curious Centaurians.

More traditional science also benefits, as future ground-based telescopes, too—like the European Extremely Large Telescope—will be able to make pictures of the planet that are, if not pretty, at least informative, letting scientists learn about things like the biosignatures that might give away the existence of life thats not blasting broadcasts. Scientists are psyched for that, because the closer a planet is, on average, the more informed we can be about it.

Looking in a mirror

But its not an Earth twin, no matter what the headlines say, and neither are any other planets scientists have found. Hot Jupiters may be cool; planets that rain glass may be a hit at parties; Super-Earth may be fun to say. And getting the full census of exoplanets is valuable. But most scientists, Messeri has found, really just want to find another Earth. Research priorities reflect that. The Kepler Space Telescope, which has discovered more planets than any other enterprise, was specifically designed to survey a portion of our region of the Milky Way galaxy to discover dozens of Earth-size planets in or near the habitable zone, according to NASA.

The search for an Earth Twin is the quest for a platonic ideal, says Messeri. It allows us to imagine Earth at its best, Earth as we want to imagine it, Earth that isnt hampered by climate change or war or disease, she says.

In other words, Earth as weve never known it and never will. If scientists found a twin planet, Pure Earth would become, in our minds, a real place that still exists, somewhere out there.

But we havent discovered that place. And we might not ever. On a quest for the perfect partner, you usually find someone whos pretty cool but yells at you when theyre hungry, or hates your mom. After you sign on to the perfect job, you discover that youre supposed to wash everyones coffee mugs. In that way, finding Proxima Centauri b while searching for Pure Earth is just like every human quest for perfection.

What weve actually found is something more real, says Messeri, and less ideal.

Thats likely to keep happening. Were never going to get to Earths twin because planets are all unique, so does that lead to some kind of ultimate disappointment? asks Messeri. Because we set up this lofty goal, and it was a goal we were always going to fail at.

Whether were all okay with that, and can accept and love the many and varied Earth Cousins for the imperfect beings they are—thats for the future to sort out.

7 holiday decorations for the ‘Star Wars’ obsessive in your life

6 Gentle Workouts That Are Perfect For Anyone Battling Chronic Pain