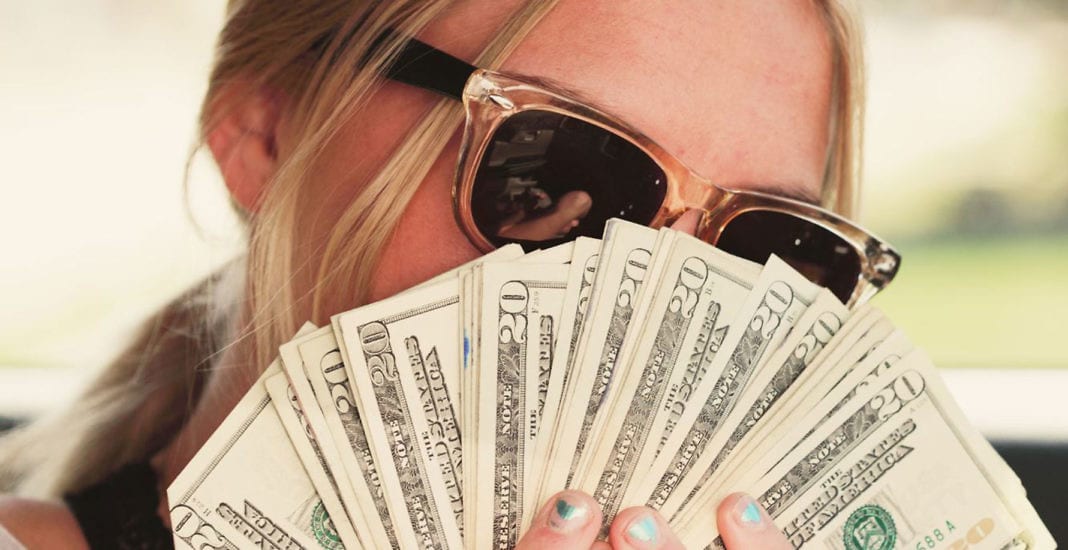 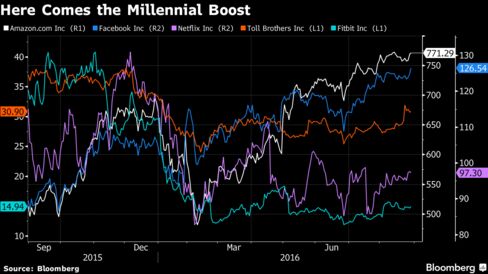 Millennials might not be taking home large pay checks right now, but eventually they will be, and Bank of America Merrill Lynch analysts have a list of stocks that investors should buy in preparation for that day.

The team, led by equity strategist Sarbjit Nahal, published a report this morning with a list of names poised to benefit from millennials, and the generation that comes after them dubbed the centennials which the firm says could live more than 100 years.

“There are 2 billion Millennials worldwide and they have overtaken Boomers to become the largest living generation in U.S. history,” the team writes. “But we need to prepare for the rise of the 2.4 billion Centennials born at the turn of the century and set to live to over 100 years. They are embracing diversity, sustainability, globalization, disruptive technology, peak stuff,’ new business models, and entrepreneurialism like no generation before them and they are economically optimistic to boot.”

Not only is the team betting on them living longer, they are also predicting their incomes will nearly triple in the next 15 years, going from $21 trillion in 2015 to $62 trillion by 2030. Based on this, here are the five key themes they believe are in play:

These generations have grown up with smartphones and social media at their fingertips, so they view technology different than their parents and grandparents. Firms like Apple Inc., Facebook Inc. Match Group Inc., Amazon.com Inc. and Netflix Inc. are all poised to benefit.

These generations have a different take on buying things than others have in the past. They research and buy more things online, they have more of a focus on health and wellness, and they like to travel. Some of the names that could benefit are American Eagle Outfitters Inc., Expedia Inc., Target Corp., Starbucks Corp., Fitbit Inc. and Under Armour Inc.

While this dream may have been delayed by the financial crisis and the rise in student debt, Bank of America says that these generation will eventually buy homes. Names that are in play here include The Home Depot Inc., Lowe’s Companies Inc., Masco Corp., and Toll Brothers Inc.

More Education Than Other Generations

They are more educated and will likely value education highly in the future when it comes time to send their kids to school, so there are a number of stocks that could see a boost here. Some of the ones mentioned in the report are Bright Horizons Family Solutions Inc., Adobe Systems Inc., Alphabet Inc., HP Inc., and Microsoft Corp.

A Different Take On Finance

Lastly, these generations are the ones getting the most attention from financial technology, or “fintech” startups, and for good reason. They are more likely to go to an alternative source for a loan or put retirement funds into an account with a robo-advisor. Some of the publicly traded names listed in this group include First Data Corp. and On Deck Capital Inc.

Goldman Sachs Group Inc. put out a similar report just over a year ago that focused on millennial parents, and the results have been a bit of a mixed bag. Some of the names mentioned in that report, such as Amazon.com Inc., Hasbro Inc., Netflix Inc., Starbucks Corp., and Wayfair Inc. have outperformed the S&P 500 since then. However, others like Target Corp., Walt Disney Corp., Whole Foods Market Inc., GrubHub Inc. and Carter’s Inc. have underperformed.

Watch Next: Millennials, Don’t Worry, You’ll Be Able to Retire

So, is THIS why so many of Rep. John Conyers’ staffers have seen him...