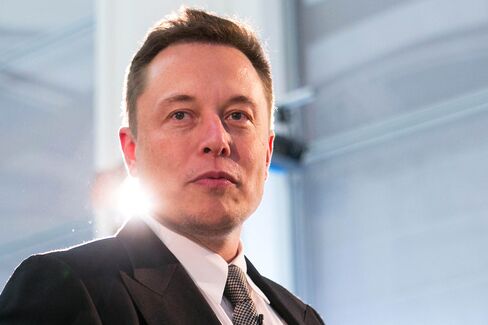 SpaceX and Tesla Motors Inc. founder Elon Musk has never been shy about making bold predictions. His latest pronouncements: that most cars wont have drivers in three years and people will arrive on Mars by 2025.

Space Exploration Technologies Corp. could start sending people off-planet by 2024 (they take months to get there), starting a 26-month cycle that will colonize the Red Planet and form the foundations of a space-faring civilization, the chief executive officer of both companies told Recodes Code conference. As for fully autonomous vehicles, safety-prone regulators — not technology — are the hold-up, the billionaire PayPal co-founder said Wednesday.

I consider autonomous driving to be basically a solved problem. Theres really only one area where its a little dodgy, and thats where youre at 30 to 40 miles per hour in cities, he said. Were less than two years away from complete autonomy. Regulators however will take at least another year; theyll want to see billions of miles of data.

The South Africa-born entrepreneur is known for his unvarnished views on, say, how malevolent artificial intelligence could doom the human race or space exploration being key to humanitys evolution. Musk — who said he occasionally succumbs to delusion — debated the best form of government (democracy) for a putative Mars colony, and the need for entrepreneurs to start businesses from iron-ore smelters to pizza delivery that can thrive in that planets harsh environment. But he also touched on matters far closer to home, including the divisive U.S. elections. Asked about controversial Republican candidate Donald Trump, Musk said no one person had the clout to affect the entire country, not even the Commander-in-Chief.

I dont think this is the finest moment for our democracy, he said. Being U.S. president is being the captain of a large ship with a small rudder. There is a limit to how much good or bad a president can do.

Business-wise, Musk welcomed competition in what he called an increasingly crowded electric and self-driving arena, including from Apple Inc., which he expected to begin producing cars in volume by 2020. The iPhone maker however has never confirmed any plans on that front. Google Inc. on the other hand, which has spent years researching and testing autonomous vehicles, posed no direct threat.

Thereve been so many announcement s of autonomous EV startups. Im waiting for my mom to announce one, he said. Googles done a good job of showing the potential of autonomous transport, but theyre not a car company.

Still, its neither dreams of Mars nor his myriad business ventures that give him most pleasure — that honor goes to his children. Musk makes it a point to spend time with them, whether its playing video games or sharing butterbeers recently at Universal Studios new Harry Potter attraction.

Kids by far make me the happiest, he said.

Watch Next: Here’s How Elon Musk Plans to Send Tourists to Space

The real promise of regulatory technology