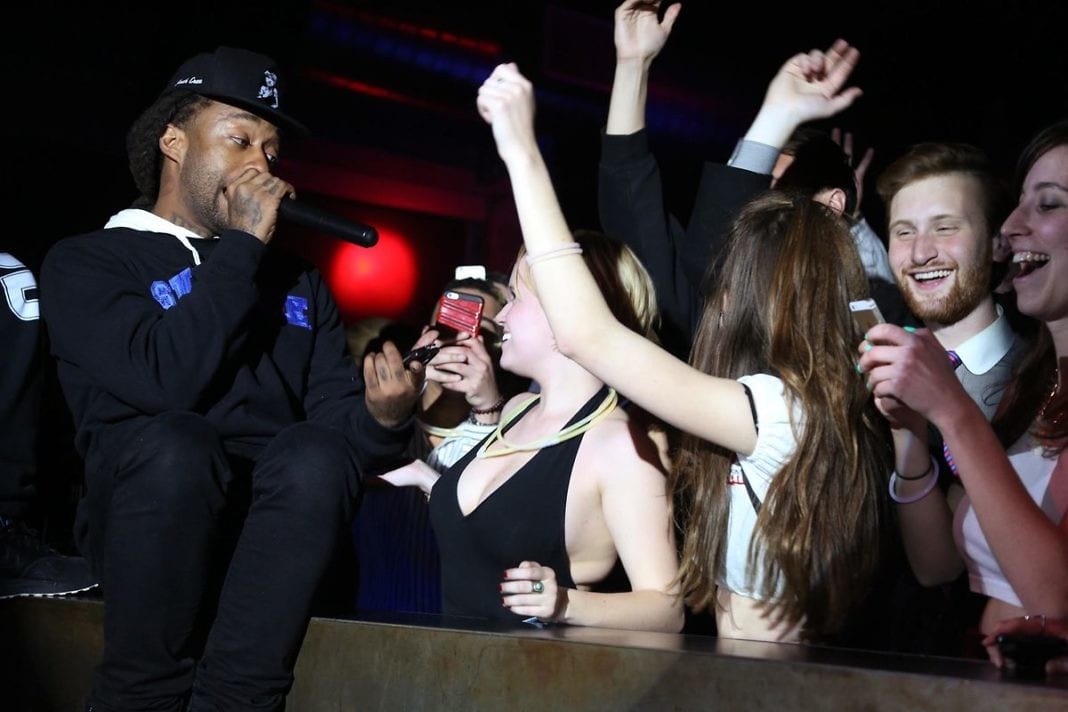 Billy McFarland was all smiles as he walked into a holiday party in December 2015, flanked by an entourage decked out in blazers and puffy coats. The DJ cranked tunes, a snow machine spit out flakes and his business partner, rapper Ja Rule, grabbed the mic for a throwback set. McFarland’s Black Card-like club, Magnises, had just expanded to the nation’s capital, its first foray outside New York. Next up was San Francisco, with plans for Chicago and Boston. It was time to celebrate.

And for a little while, he did. Over a few years the credit card-thin idea had attracted millions of dollars of investment capital and some favorable press. Parties, special events and some big names helped push McFarland’s brainchild past initial hurdles. But in the end, it was not to be. Another McFarland idea, one for a Bahamas music festival to hype his talent-booking service, Fyre Media LLC, would help bring it all tumbling down.

In late April, thousands of moneyed millennials flocked to the Caribbean for Fyre Festival, expecting a beach bacchanal. Instead they found “Lord of the Flies,” replete with a scramble for food and shelter that was picked apart in a global media frenzy. For McFarland, then 25, it ended even worse: He was charged with wire fraud and faces a dozen lawsuits. Federal prosecutors alleged he cheated investors in the startup out of $1.2 million by luring them in with bogus documents overstating its revenue.

Now, with McFarland exploring a possible plea deal with the government, expansion plans for Magnises have been scrapped. There’s little left of the company today, according to people familiar with its operations. Executives have departed for other jobs, the customer experience team fled to a former business partner and—while the website is still exists—there’s no way to sign up.

Magnises, a word that doesn’t really mean anything, was meant to be a passport to everything. For $250-per-year, members would gain entry to exclusive celebrity events, a concierge service to score hard-to-get concert tickets and restaurant reservations, and access to a swanky, shared hangout pad. They’d also get to meet up with other wealthy young folk who like to party: entrepreneurs, businesspeople and entertainers.

The idea, McFarland has said, was that millennials want exclusivity, parties, access—not airline miles or discounted appliances. So he came up with something to give the veneer of status with the ability to network—basically an Amex Black Card for the man-bun set. Only the Magnises card isn’t a credit card at all. The metal rectangle simply duplicates the magnetic strip from your actual credit card so you can swipe with style, as opposed to fishing out some pedestrian, bank-issued plastic from your wallet.

Despite the hype and the stardust, though, it was never clear just how well Magnises was doing. In 2014, Magnises told the press it had around 1,200 members. The company’s WeFunder page claimed over 10,000 members. In September 2016, McFarland said he had 30,000 cardholders. Two months later, at a conference in Portugal, he claimed 100,000 customers, which would mean Magnises had staggering annual growth in just two years. McFarland said last year that his goal was to attract 1 million members across 50 markets by 2019.

McFarland, who is free on bail, and his lawyer didn’t respond to multiple requests for comment about the fate of Magnises.

McFarland appeared on the New York startup scene in 2011, when he was just 20. Raised in New Jersey, he had attended a prestigious preparatory school before going to Bucknell University. During his freshman year , he dropped out and founded a company called Spling, a platform for online advertising, and was accepted into startup accelerator Dreamit.

In 2013, Magnises was born. Early on, McFarland met Ja Rule, whose real name is Jeffrey Atkins, while booking the rapper for a show. (As McFarland tells it, they met while sharing a helicopter ride.) Atkins joined Magnises in a creative role before going on to help McFarland start Fyre Media. A representative for Atkins said the musician had no operational role in Magnises.

McFarland surrounded himself with characters, famous and attractive, but spent little time running his startups, according to a former co-worker who requested anonymity. Colleagues described him as uncannily persuasive, easily earning the trust of investors. With McFarland as pitchman, Magnises and its dozen or so employees raked in cash from Deep Fork Capital, an early stage fund based in Menlo Park, California, and New York-based Great Oaks Venture Capital. They injected as much as $3 million into Magnises, according to the startup, though neither firm now lists the company on their websites. Advisers with a variety of backgrounds hopped aboard, such as socialite Dori Cooperman and Avi Savar, who runs Dreamit, according to their LinkedIn pages. Matt Morchower, formerly an executive at a private-jet card company, joined up as chief operating officer, though he left within a year. Morchower declined to comment, while the rest didn’t respond to requests for comment.

When McFarland wasn’t pitching insiders, he was pitching the public. He went on Fox Business, CNBC and Bloomberg TV. His company was also profiled by the New York Times. Sometimes appearing alongside Ja Rule, McFarland was continuously puffing up his product, using the same talking points almost verbatim. He speaks with a rapid staccato—every phrase ending abruptly as he hopscotches from one marketing buzzword to the next.

“It’s less a calling card,” he said in a 2014 Fox Business interview, a wide grin splashed across his face, “and more of an on-demand experience platform.”

Early on, home base for Magnises was a townhouse in Manhattan’s West Village, which was used to host parties and dinners for members. The well-appointed building was a co-working space by day, with tables to spread out laptops and papers, and a fancy frat house by night, replete with booze for carousing. McFarland conducted business meetings at the location, and he even made all the Magnises metal cards on site.

The landlord wasn’t pleased. In a $100,000 lawsuit filed in 2015, the owner alleged that McFarland used the residential space to conduct commercial business, leaving the building “trashed.” McFarland “damaged and destroyed several windows and virtually all the kitchen appliances” and left the townhouse “in a state of total disrepair, rubble, and disarray,” according to court papers. McFarland largely denied the main allegations in court filings. The case was settled in January 2016. Magnises subsequently decamped for a more traditional office some blocks north, in Manhattan’s Chelsea neighborhood.

Following the company to its new digs, however, was a growing number of customer complaints. In its heyday, such Magnises events as a cask-tasting from Johnnie Walker, a party at the Jue Lan Club and a Tesla test drive went smoothly. There was even an investors club, whose members were invited to review pitches for other startups and vote on which one the club should put money into. On WeFunder, Magnises claimed to make 70 percent of its revenue from annual membership fees, but in a 2016 article, Grant Margolin, the vice president of brand development for Magnises, alleged the majority of revenue came from branded events.

The extent of Johnnie Walker’s relationship with Magnises was participation in a few small events wherein the brand provided whisky experts for tasting opportunities to Magnises’ members in attendance. A spokesperson for Johnnie Walker said the company never paid Magnises to host events. A person familiar with the matter said Tesla provided vehicles for a Magnises event, but never paid the card company. Margolin didn’t return a call seeking comment.

As time went on, Magnises members increasingly complained of broken promises. Ticket orders for events such as concerts or theater shows would go unfulfilled. International vacations booked through the club would be canceled at the last minute. Websites started popping up for irked Magnises members. Then the bad press began.

Financial researcher Chris Connelly, 38, said he ordered tickets to the hit Broadway show “Hamilton” through Magnises, forking over thousands of dollars. One set of tickets arrived just fine. An additional booking was canceled a week beforehand. A final pair, bought for a friend flying in from Europe, was denied with just two days notice, he said. Demands for refunds went unanswered, and he eventually contacted the consumer protection bureau at the New York Attorney General’s office. “Obviously,” after months of back-and-forth, “I canceled that membership,” said Connelly.

Elise Omaits, a 27-year-old New Yorker who works in health policy, recalled seeing a surprising renewal charge on her bank statement after signing up for Magnises last year, months before it would have become due. Customer service told her there was a mix-up, she said, and explained that they’d accidentally charged members the $250 fee prematurely. She ended up filing a complaint with the Better Business Bureau before pressing to get her refund months later. (Magnises gets an “F” grade from the BBB.)

It’s been nine months since McFarland unveiled his million-millennial goal for Magnises. It’s been four months since Fyre Festival imploded. While it’s clear that Magnises was already having difficulties, the festival’s very public failure and McFarland’s subsequent arrest may have been the final blow.

Just weeks after the concert was scheduled to take place, Magnises terminated the lease on its Chelsea office, according to a person familiar with the matter. Several employees left for Ollie, a co-living space startup it once partnered with, according to another person familiar with the shift, adding that Magnises agreed to transfer some of its technology, too. Attempts to purchase a new membership on Magnises’s website are met with an error message, including one that says “If you are a customer trying to make a purchase, please contact the owner of this site. Your transaction has not been processed.” Stripe, the company’s credit-card processor, didn’t reply to requests for comment.

In an interview last September, McFarland bragged of the long waiting list to be a Magnises cardholder. Like the Fyre Festival, the card was built on a promise of exclusivity and luxury. And while the apparent end of Magnises wasn’t as spectacular, the parallel didn’t escape federal prosecutors.

At a hearing in Manhattan federal court this summer, Assistant U.S. Attorney Kristy Greenberg said McFarland was finally being “forced to face reality” and that his business dealings exhibited the “same pattern of fraudulent behavior.”

After his release on $300,000 bail, McFarland waved off photographers as he left the building, his entourage replaced by a single public defender. He wasn’t heading back to his pricey Manhattan apartment, though.

He was headed back to New Jersey—to stay with his parents.

Theranos could be banned from running labs for two years, regulators warn

The world’s best cities for millennials