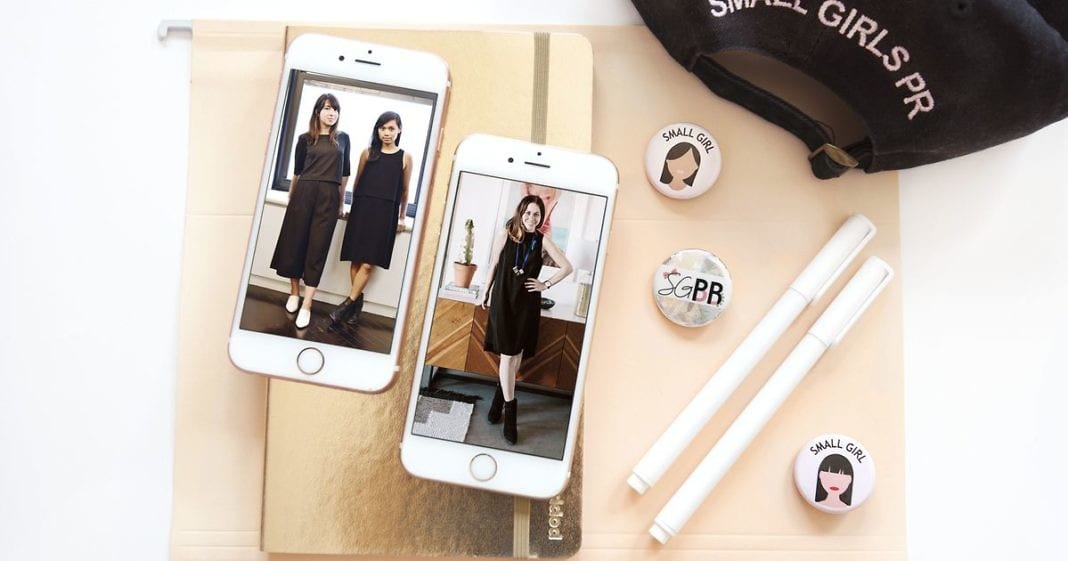 At 124 years old, General Electric has multiple decades on the world’s most valuable tech companies. But when it comes to sharing its story and keeping the brand at top of mind, GE taps one of the youngest marketing agencies New York-based Small Girls PR.

The age difference between the conglomerate and Small Girls (name inspired by the just over 5-feet heights of its two founders) is no shocker to GE Chief Marketing Officer Linda Boff. It helps with GE’s desire for ideas that are contemporary and relevant to younger audiences.

For GE along with Google, Verizon, AOL and other large lifestyle and fashion brands, that in-the-know agency is Small Girls PR.

Since its 2010 launch, the company, now with 36 employees, has distinguished itself by the events they throw and the connections they form.

SEE ALSO: GE is taking over Lena Dunham’s newsletter this week to honor women in science

When cofounders Mallory Blair, 27, and Bianca Caampued, 32, joined forces they dismissed the standard habits of PR like relying on press releases or mass email distribution lists. Instead, they prioritize one-to-one media outreach and the team coordinates influencer marketing campaigns.

Six years in, Blair and Caampued pride themselves in these experiential approaches. The latest acquiring a million-dollar plus business from another young woman who has followed a similar approach, just on the opposite coast. This month, (NO SUBJECT), a six-year-old agency based in Los Angeles and run by Jaclyn Johnson, 31, is joining Small Girls.

A perfect match to find matches

Even as influencer marketing faces restrictions from the Federal Trade Commission, these three women are betting that creator relationships and collaborations can still be a way for brands to succeed.

Earlier this week, the FTC told the New York Times that there is ambiguity of whether adding hashtags to a photo or video is enough disclosure. For Small Girls PR, the taboo of influencer marketing falls not only in a lack of transparency but also a lack of relationship building.

“We’re about building creative experiences and partnerships. We’ve evangelized technology startups in a way that isn’t just #spon and #ad and earning awareness because of the relationships and the strategy to get there,” Blair said.

The focus on creative events paired with eclectic influencers was one of the reasons GE became enamored with the agency. For its first assignment, Small Girls planned one of GE’s events at the annual tech and music festival South by Southwest. The agency pitched a robotic barista that used laser printing to sketch faces onto coffee foam.

Guests included tech reporters and writers as well as company founders. Small Girls does not “just find bloggers, we tap in other founders. We do campaigns where those at the table might be Alexis Ohanian of Reddit or David Karp of Tumblr instead of a fashion blogger just looking to get paid,” Blair said.

“I think its pretty different than paying Khloe Kardashian. Its a transaction. Its a deal. This is who has a genuine interest in fashion or food,” Boff said.

Clients told Mashable they see Small Girls not simply as an agency they outsource projects to but as a strategic partner. That’s in part due to their smaller nature and their commitment to digital.

“Many PR firms are still in denial, or at least still angry, about the internet. Small Girls PR embraces it,” Rick Webb, cofounder of digital marketing company The Barbarian Group and now an angel investor, wrote in an email. He has served as an advisor to Small Girls since 2013.

For Blair, Caampued and Johnson, social media and the internet was a part of the lives before they started their agencies. Blair and Caampued gained internet and in-person fame from her personal Tumblr blog. Johnson had opted for Blogger.

“We came from the blogging community. That means we know how to work with bloggers,” Blair said.

A foundation in blogging doesn’t mean Small Girls avoids traditional outlets. The agency worked with Gett, an Uber competitor, to land a front page story on the print edition of the New York Times.

The combination of press, influencers and events is one reason why women’s clothing store BB Dakota dropped two older agencies for Small Girls.

“We worked with a flashy, big name firm for about 10 months, but we were kind of in a sea of other brands. It was kind of like a puppy mill of PR,” said BB Dakota Creative Director Katharine Brandes. “Oh, theyre trying to become a digital agency? Theyre not, and theyre kind of experimenting on us.”

BB Dakota had decided to reallocate its marketing dollars away from fashion bloggers and toward young artists. To help with that decision, Small Girls, most recently, connected the fashion company with Parenthood actress and film director Sarah Ramos who worked on a short film with the brand.

“It ends up tapping into this idea of people as symbiotic vehicles for the brand, where it’s a mutually beneficial relationship,” Johnson said.

With the six-person team at (NO SUBJECT) on board, Small Girls’ spreadsheet of influencers has grown, and the company has plans to host more events. Johnson’s company focuses on coordinating social events and panels for clients such as Microsoft, Sweetgreen and Urban Decay cosmetics.

Johnson estimated that 70 percent of these occur outside of NY and LA.

“The three of us are never going to be in the same city, but we’ll have a good balance back and forth,” Blair said.

Training self-driving cars on the streets of Los Santos with GTA V just got...

FDA orders Scanadu to shut down support for its Scout device and customers are...

Meet TechCrunch in Tunis, Cairo, Dubai and Beirut this month