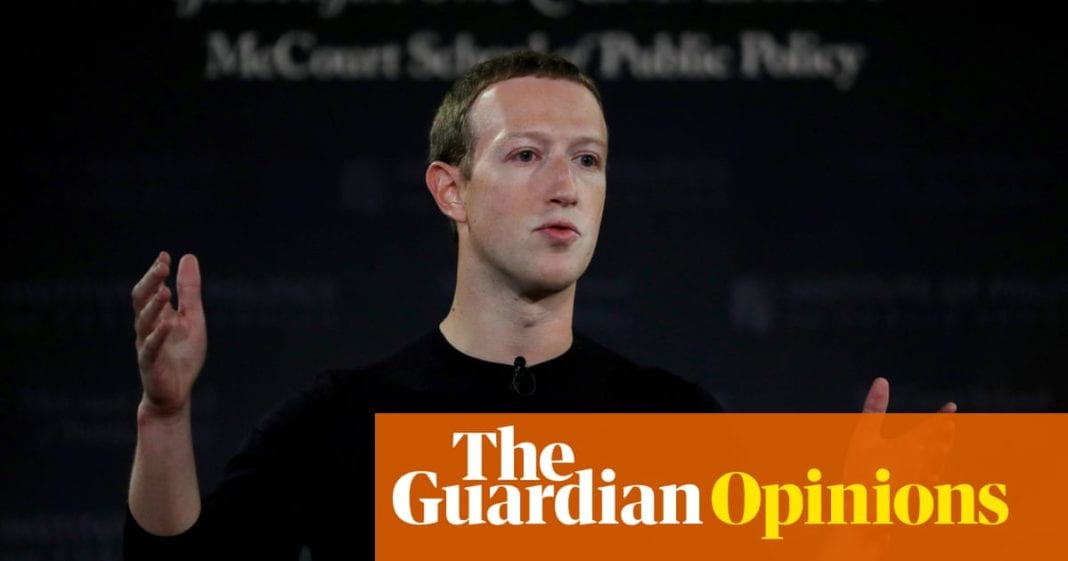 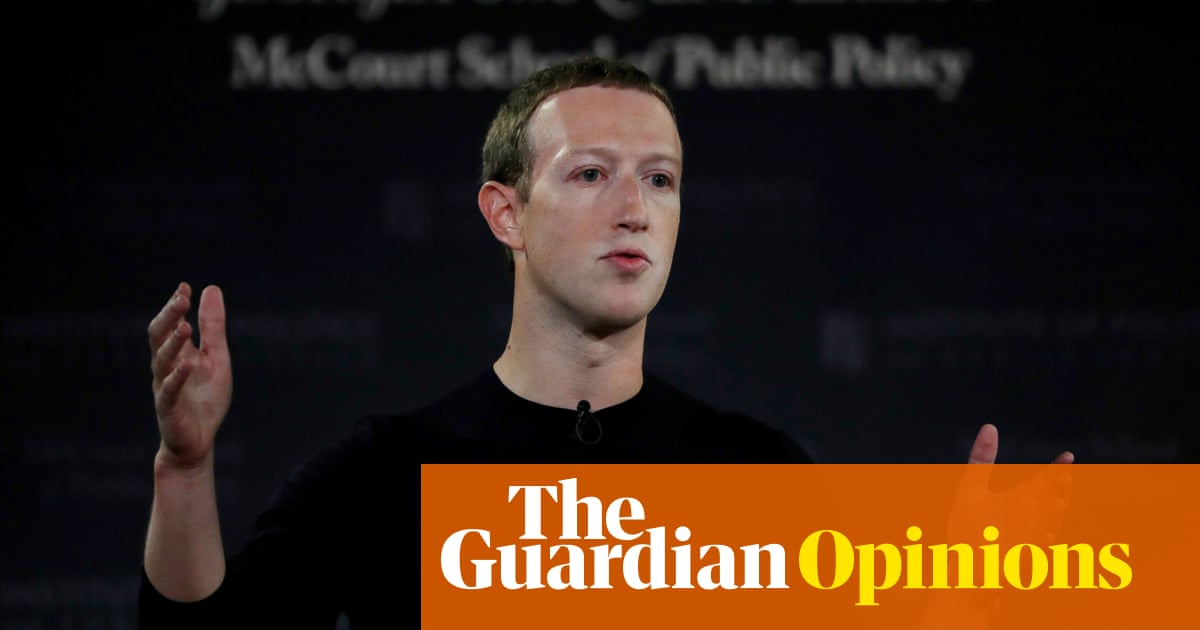 For his entire adult life, Facebook’s CEO, Mark Zuckerberg, has been able to make up in hubris what he lacks in education. He continued that trend on Thursday while addressing students at Georgetown University in Washington DC, in what was billed as a major manifesto on “free speech”.

“I am here today because I believe we must continue to stand for free expression,” Zuckerberg said, as if anyone beyond the growing collection of authoritarian dictators seriously argues against it.

However, Zuckerberg himself argued against free speech in his own speech. He defended Facebook’s practice of removing or impeding the circulation of material he considers noxious, such as pornography and hate speech.

Now, that’s a fine policy (even if it fails in practice) because a company should do what’s good for the company and its users. No advertiser wants to see its brand associated with the worst that human beings can produce.

Zuckerberg’s unsophisticated thoughts on free speech generated a manifesto that can only be called incoherent. Unsurprisingly, Facebook’s content regulations have been incoherent in design and in practice.

Imagine how insulting it must have been for hundreds of the brightest young minds in America, many of whom have considered deeply the history of American constitutional law and the ways it influences democracy, to sit politely and listen to billionaire who seems to have barely cracked a book on the subject and can’t seem to form a clear line of argument.

The manifesto turned out to be a weak undergraduate essay that would earn at most a B- from any university professor. Zuckerberg outlined a facile and incomplete history of the expansion of legal speech in the United States, misapplied it to his own global, private company (as if a limitation on the state’s ability to censor has anything to do with what any company may or should do), and offered the shallowest of platitudes about the value of two of his favorite phrases, “giving more people a voice” and “bringing people together”.

The speech was mostly a rehashing of many of his recent speeches, invoking his duel mission of promoting those two stock phrases. What was new was not interesting. What was interesting was not new.

The speech was so weak and poorly structured that it could not have served as worse evidence in an argument for the value of speech itself. The event would have been much more valuable to Zuckerberg and his audience if the Georgetown public policy students had lectured him about the history and value of free speech. They, after all, know things and are trained to think and write clearly.

But here’s the thing: Zuckerberg was not wrong. He just could not articulate why. The world is better now than it was two centuries ago, largely because more people can express themselves effectively without fear of death or torture. It’s better off because discursive communities like scientists and lawyers can argue frankly about what is true and important. Powerful recent technologies have enabled people to find, organize and motivate each other and thus exercise influence in new and surprising (if often disturbing and violent) ways. But these points are banal. Yet Zuckerberg describes them as if they are profound.

Zuckerberg managed to address some of the recent controversies that his company’s policies have generated, if only obliquely.

Critcised widely, most aggressively by presidential candidate Elizabeth Warren, for deciding not to remove obviously misleading political advertisements in the United States, Zuckerberg defended the decision with false modesty. “I don’t think it’s right for a private company to censor politicians in a democracy,” he said.

That’s not a bad position to take, even if it obscures two key facts: Facebook is uniquely powerful in the world, structuring the social and knowledge worlds of almost 2.5 billion people; and Facebook is spectacularly inconsistent (if not incompetent) at enforcing its own policies.

Zuckerberg has never acknowledged that Facebook is too big to govern or reform. Even considering just political advertising in the United States (and ignoring all other content uploaded by users and groups and ads in the rest of the world) Facebook would have to patrol hundreds of thousands of ads for races at all levels of government. It can’t do that. No one could.

A strong argument for Facebook refraining from judging the truth claims of political ads would start with an acknowledgement of its inability to do anything so nuanced at scale. One Trump ad about Joe Biden is an easy call. Millions of political ads from around the world are not so obviously misleading.

Zuckerberg loves to claim all the great benefits of the internet as his own. He frequently conflates Facebook with the internet, even though a closed, commercial system is in many ways exactly what the internet is not supposed to be. So while boasting of the enlightening effects of the spread of knowledge and information, he ignores the toxic attributes of his own company.

Facebook has three defining attributes that make Facebook Facebook. Its scale of 2.4 billion people uploading content in more than 150 languages make it too big to filter. Its algorithmic design that amplifies content judged to attract attention and interaction (clicks, shares, likes, comments) favors extremism and powerful emotions over rational and measured expression. And the cheap and effective advertising system is monumentally profitable and thus starves other sources of good information of needed revenue.

In his speech Thursday Zuckerberg boasted that the Black Lives Matter movement started on Facebook. It did. But it also almost died there. It jumped to Twitter and thrived. As the internet scholar Zeynep Tufekci has explained, Facebook’s algorithmic system squelched #BlackLivesMatter and other activist movements as it was promoting vapid images like the Ice Bucket Challenge. On Twitter, with much lighter algorithmic amplification, #BlackLivesMatter could hold attention.

Zuckerberg also neglected the fact that the largest Black Lives Matter group on Facebook was hosted by a white man from Australia and was otherwise completely fake.

Zuckerberg wants us to believe that one must be for or against free speech with no nuance, complexity or cultural specificity, despite running a company that’s drowning in complexity. He wants our discussions to be as abstract and idealistic as possible. He wants us not to look too closely at Facebook itself.

For being such a key player in the young 21st century, Zuckerberg embraces an outdated, 19th-century view of speech. For him there is actually something like a marketplace of ideas through which the best ideas prevail once we encounter evidence and argument. The problem is, Facebook undermines any attempt to sustain such a practice.

We largely solved the challenge of the 19th century. By 2019 we have managed to offer most people in the world a platform for expression and a tool for constant, affordable human communication. In much of the world, speech remains beyond the reach of state control. That’s all fine, except it creates a new problem we have yet to confront.

The problem of the 21st century is cacophony. Too many people are yelling at the same time. Attentions fracture. Passions erupt. Facts crumble. It’s increasingly hard to deliberate deeply about complex crucial issues with an informed public. We have access to more knowledge yet we can’t think and talk like adults about serious things.

By invoking all the progressive social movements that have found Facebook useful, Zuckerberg tries to hitch his company to their results. But ignoring the Nazis and misogynists who also use Facebook to organize and recruit, he hopes we equate motivation with free speech and democracy.

The thing is, a thriving democracy needs more than motivation, the ability to find and organize like-minded people. Democracies also need deliberation. We have let the institutions that foster discussion among well informed, differently-minded people crumble. Soon all we will have left is Facebook. Look at Myanmar to see how well that works.

Facebook Stored Millions of Passwords in Plaintext—Change Yours Now

How to save your privacy from the Internet’s clutches