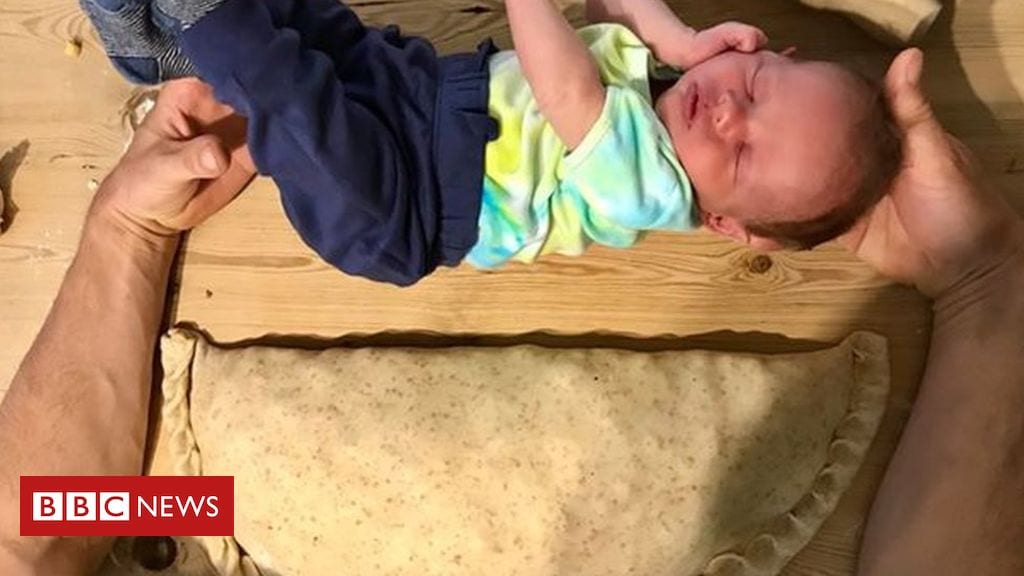 A dad has made a pasty the same size and weight as his newborn son.

It took Tim Fuge 19 hours to eat the 2.8kg (6.4lb) beef pasty in honour of Jowan’s birth during lockdown.

The 33-year-old said the trickiest part was not making it but finding a baking tray big enough to cook it on.

“I added all the ingredients on the scale and it came out bang up to how much the baby weighed when he was born,” said the father of three from Cornwall.

The pasty is estimated to have up to 4,000 calories and is half a metre (50cm) in diameter – the same length as Jowan, who is two weeks old.

It has a filling of beef skirt, which cooks at the same speed as the swede, onion and potatoes accompanying it.

Mr Fuge who ended using the grill pan from his oven to cook the giant pasty, had only made the traditional Cornish food for the first time last week.

“That was exactly the same but of a bit more modest size,” he said. “We just decided to make pasties because our favourite pasty shops [had] shut.”

Mr Fuge started making the giant pasty on Thursday and spent two-and-a-half hours working on it so it was ready for lunchtime.

“I only managed to eat half of it at lunch and had the other half this morning. I am absolutely stuffed,” Mr Fuge said.

The self-employed lead worker said he is grateful for the extra time he can spend with his family during lockdown as he said he “wouldn’t have had time to do this if I was still working”.

“I’m trying not to think of the financial side of things but enjoy the time I never thought I’d have with my kids,” he said.

‘Help! I’m Turning Into My Mom!’ 10 Women Describe How It Feels

8 Exercise Mistakes You’re Making That Are Sabotaging Your Workout