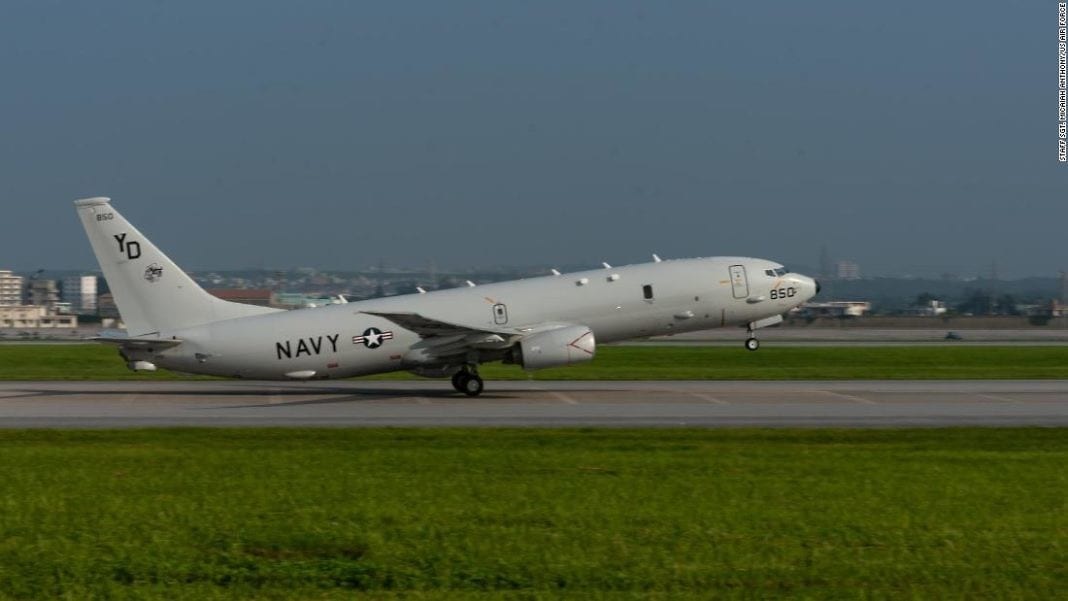 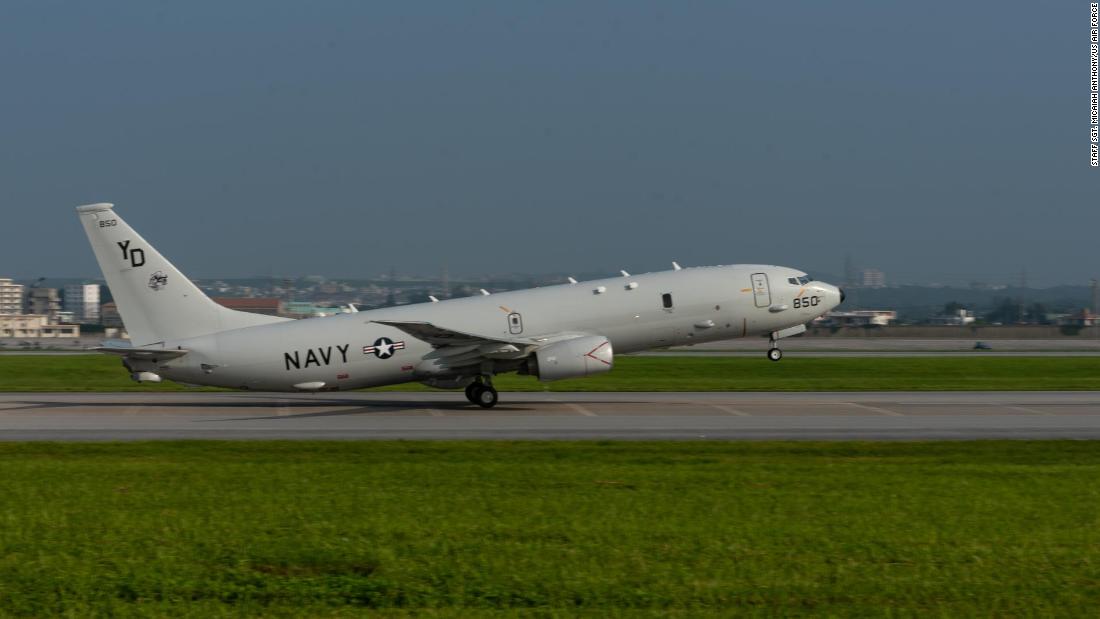 Over the South China Sea (CNN)One by one, the naval aviators and journalists lost contact with the outside world, dropping our cell phones into a large black bag.

This was how a CNN crew began a rare trip on August 10 in a US Navy jet over one of the most hotly-contested regions of the planet. Here’s a look inside that journey. 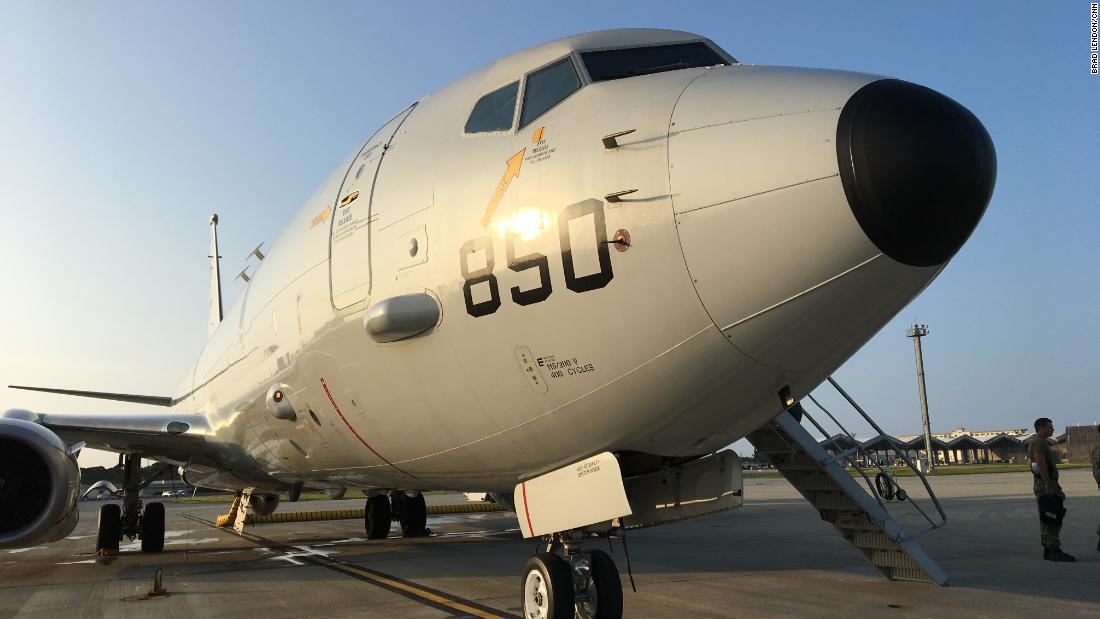 Our ride awaited us at Kadena Air Base on the southern Japanese island of Okinawa. The P-8A Poseidon is the US Navy’s newest aircraft for anti-submarine and anti-surface warfare, as well as reconnaissance and intelligence gathering. It’s based on the Boeing 737, the most-popular passenger jet ever, but it can do way more than take you from Boston to Baltimore.
From the outside, the biggest noticeable difference is the windows. The P-8 has one big one on each side of the fuselage, not a whole line like you see on the 737. Cmdr. Chris Purcell, leader of Patrol Squadron Four and the person in charge of this mission, says that’s because windows limit a plane’s weight-bearing capabilities and the P-8, unlike the 737, has to carry heavy armaments.
Those armaments include Harpoon anti-ship missiles and Mark 54 torpedoes. With the dozens of sonar buoys the Poseidon carries, the plane can track down and sink an enemy submarine all by itself.

This is done as a walkaround with a naval aviator, not with a flight attendant pointing with two fingers or with a seat-back video. We’re shown where our life jackets are — in a rack toward the rear of the plane — and rectangular boxes containing the inflatable lift rafts in case the jet has to ditch in the South China Sea.
There are no slides at the exits. Just climb out onto the wing and jump into the ocean, we’re told. 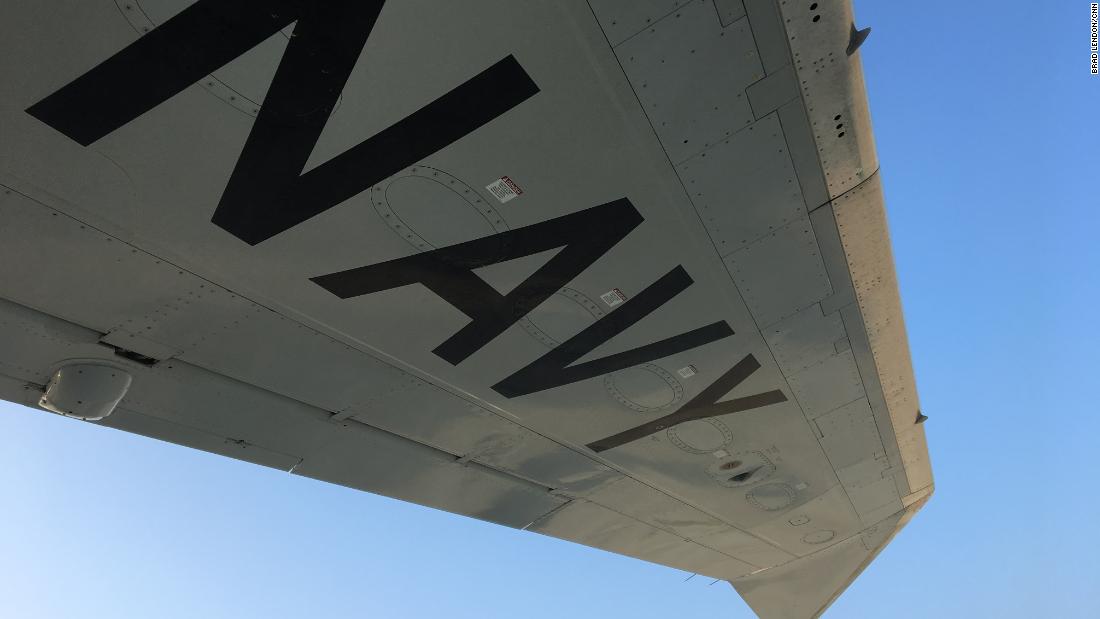 Passengers and most of the crew on the P-8 sit facing the back of the plane for takeoff. Seat belts buckle in four ways, two across the lap and two tight shoulder harnesses.
Six of the passenger seats are directly across from the five-person air combat crew about halfway back in the fuselage of the 128-foot-long jet.
The crew’s seats unlock and swivel, however. And that’s exactly what they do once the pilot gives the OK, turning to their right in unison with military precision to fire up their sensors and video monitors. 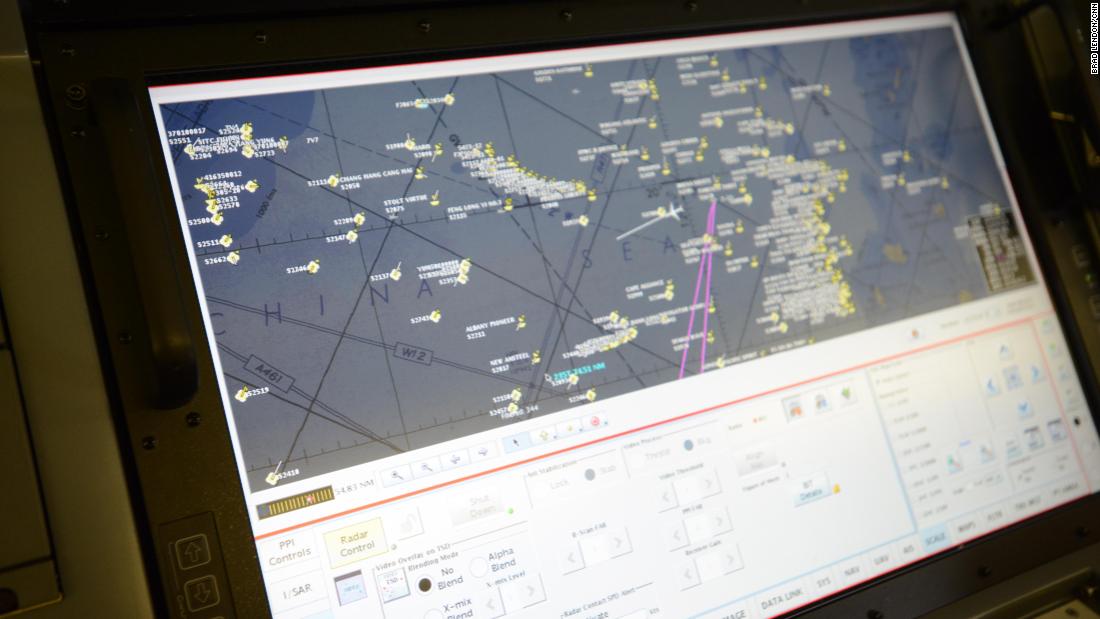 The air combat crew — four men and one woman — sit at a line of large, flat screen video monitors on the left side of the jet, each with a mouse and joystick. They mouse around their monitors, tracking what looks like hundreds of ships in the waters below.
Commercial vessels are identified by their names. Military vessels pose a bit more of a challenge. Lt. Lauren Callen scans an unidentified blip. Data collected by the Poseidon’s computers is analyzed as Callen goes through pull down menus. After a few minutes, she lists the blip as a probable Chinese destroyer, Luyang class.
It’s one of several Chinese warships seen on the trip. The Poseidon’s cameras and computers can provide visual identification at long distances, spotting one Chinese frigate 40 miles away.

A familiar smell begins to fill the cabin, one you’ve probably often come across in malls and airports — cinnamon buns!
One of the Navy crew is baking them fresh in the plane’s oven, complete with a small tub of the sweet, white glaze. It’s enough to draw our attention away from whatever the Chinese navy is up to below.
The buns hit the spot. What’s missing is the coffee to go with them. There’s only one small brewing pot in the plane’s galley, definitely smaller than your standard 12-cup Mr. Coffee at home. “Design failure,” one of the crew deadpans.
The crew seems unflustered. They favor Japanese Georgia Coffee in a can, which they’ve brought in their personal snack packs. Everything from ranch flavored-chips to baby carrots is pulled from plastic bags and small coolers and passed around. 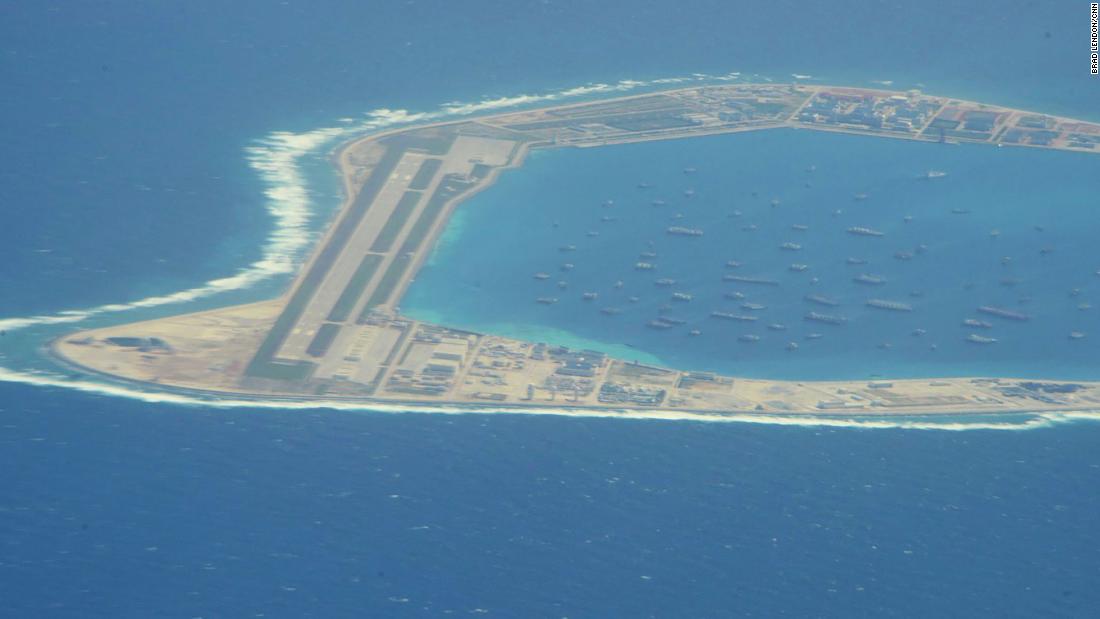 US Navy plane warned off by Chinese military

As the Poseidon comes into view of Subi Reef, excitement picks up among the five journalists aboard the flight. We scramble for views at the observation window facing the island as the plane circles it.
We’d all seen satellite photos showing how the islands had been built up over the past three years. But it’s quite more impressive to see them from 16,500 feet. What China has accomplished is intimidating.
The Poseidon’s air combat crew focuses on specific features.
“Here’s the SAM (surface-to-air missile) site,” Callen says.
Later she tells the rest of the Navy team, “I want eyes on the ships. Let’s get a good count.” They count 86 vessels in Subi’s lagoon. 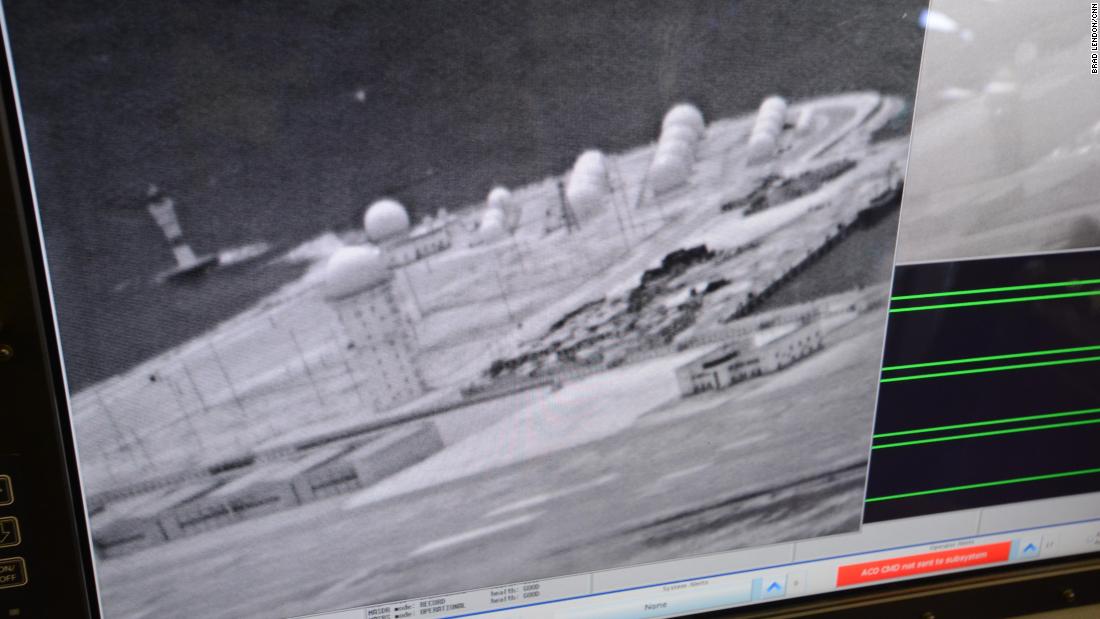 While the Chinese buildup is impressive, you can only imagine how many people it took to pull it off. That’s because the bases looks like ghost towns. Hardly a soul can be seen.
As the Navy plane approaches Fiery Cross Reef, its cameras catch a line of about 10 vehicles driving up a runway. The vehicles scatter among the streets on the man-made island as we get closer, at least giving the impression that they are trying to make themselves harder to observe from above.

A taste of home

The Navy crew has been busy in the tiny galley again, this time heating up a few family-sized trays of ravioli and rigatoni with garlic bread on the side.
We eat it from Dixie-brand paper bowls with plastic spoons scooping up the rich, red pasta sauce. It’s not something a Hong Kong-based journalist can get easily and reminds me of countless family dinners back in the US.
I’d trade it for just about any airline meal I’ve ever had, which makes me wonder if the US Navy can do this, why can’t US airlines? 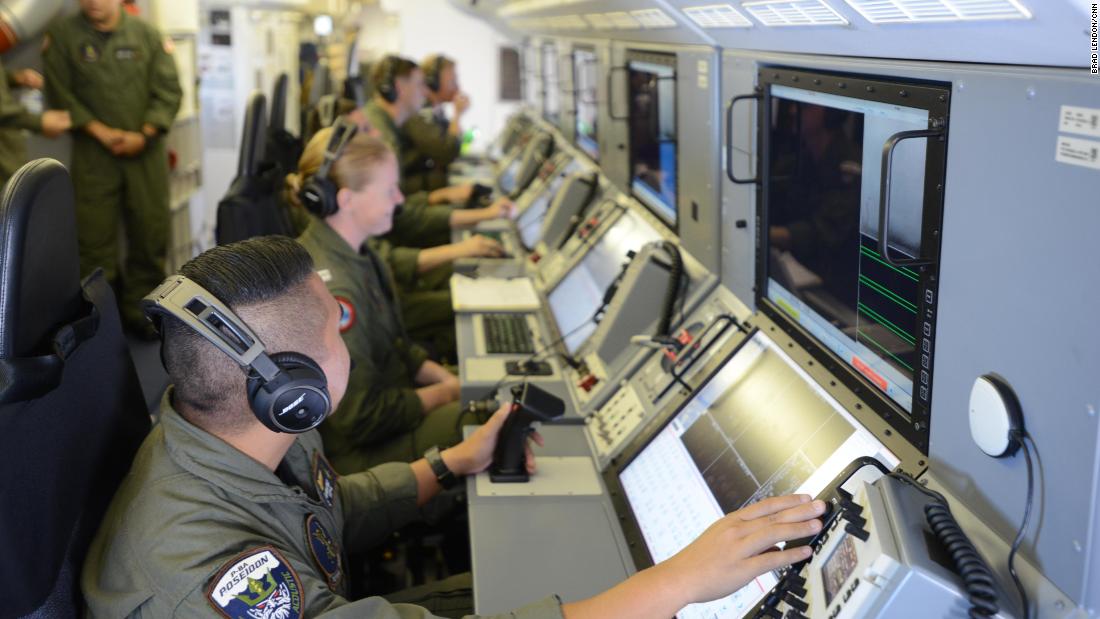 A routine day at work

The trip from Okinawa over the South China Sea and back took about eight hours, a standard American work day.
After the plane circles Mischief Reef, the last major man-made island on the trip, it heads north back toward Kadena Air Base.
The air combat crew brings up recordings of what they’ve seen on their flat screens, going over the details, looking for things they might have missed or will need further analysis when these are turned over to Navy intelligence.
As we taxi to the tarmac at Kadena, other P-8As can be seen, at least one about to leave on or also just returning from a flight.
The sight reinforces what the Navy says: these missions are frequent and they will continue.

How Ivanka Trump Says a Lot About Nothing at All