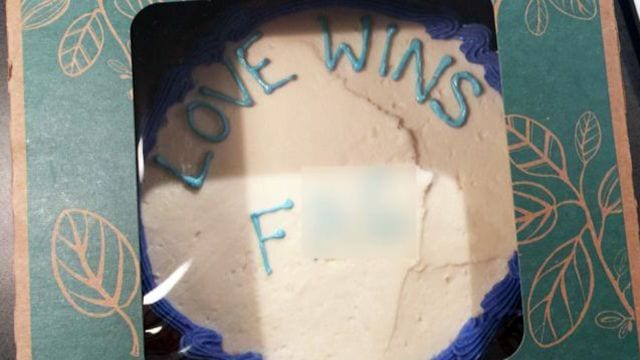 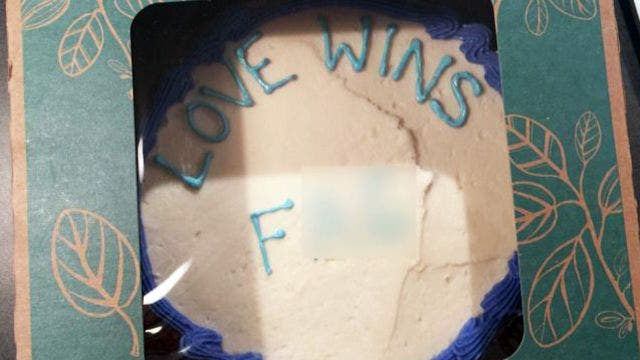 Whole Foods is fighting back against a Texas pastor who accused the Austin-based grocery chain of decorating a cake with an anti-gay slur.

Jordan Brown, an openly gay pastor who preaches at the non-denominational Church of Open Doors, said he ordered a cake with the words “Love Wins” written in blue icing on April 14 for a member of his congregation, according to an emotional distress lawsuit filed Monday in Travis County court. But Brown said when he got to his car he saw “Love Wins F**” had been scrawled instead.

Whole Foods, however, countersued on Tuesday, alleging the entire incident was a hoax perpetrated by Brown.

According to the countersuit, the pastor “intentionally, knowingly and falsely accused Whole Foods and its employees of writing the homophobic slur…on a custom made cake that he ordered from WFM’s Lamar Store in Austin,” My Statesman reported. Whole Foods also released security footage from their flagship Austin store that they say proves their workers did not add the slur to the cake.

After reviewing their security footage of Mr. Brown, its clear that the UPC label was in fact on top of the cake box, not on the side of the package, Whole Foods said in a statement.

The company said it stands by the employees of the Austin store who deny any wrongdoing and is seeking $100,000 in damages from Brown.

When news of Brown’s initial suit first broke, Whole Foods immediately denied its workers were in the wrong.

Our team member wrote “love wins” at the top of the cake as requested by the guest, and that’s exactly how the cake was packaged and sold at the store,” a company statement said. “Our team members do not accept or design bakery orders that include language or images that are offensive.  Whole Foods Market has a zero tolerance policy for discrimination.  We stand behind our bakery team member, who is part of the LGBT community, and the additional team members from the store, who confirmed the cake was decorated with only the message Love Wins.

The issue gained national attention after the Kaplan Law Firm, which is representing Brown, posted a video on Monday filmed by the pastor and showing an apparently unopened, sealed box with the cake in question.

The feeling that I had just resurfaced a bunch of painful memories of things that have happened to me, Brown said.

The pastor said he tried calling Whole Foods to resolve the situation and spoke to Team Leader Geoff Nunez, who was initially extremely apologetic and asked that the matter be handled internally.

But after waiting two hours, Brown said Nunez called back and said there was nothing he could do.

New pot gym in California: How bad is it to exercise while high?

Margaret Atwood: ‘She’s ahead of everyone in the room’