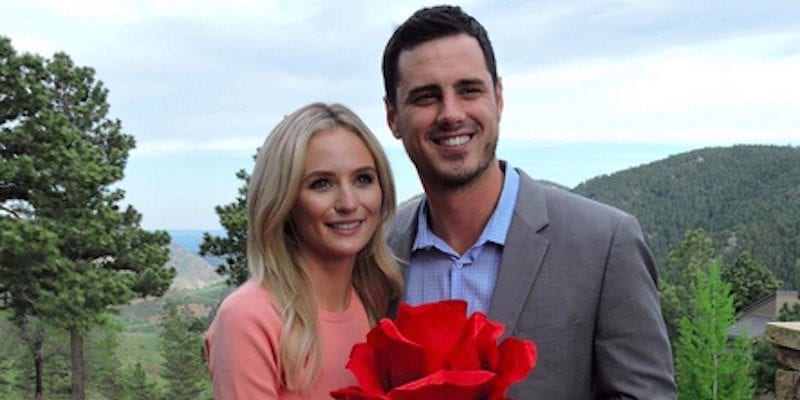 The somewhatinevitable has finally happened: The Bachelor Ben Higgins and Lauren Bushnell havebroken up.

Also, the spinoff show based ontheir relationship ended with a question mark. A

So, Elite Daily spoke to Alessandra Conti, a high-profilematchmaker based in Beverly Hills, and Susan Trombetti,CEO of Exclusive Matchmaking, about whyBen and Lauren were literallynever destined for happily ever after in the first place.

Basically, if you didnt already, you should have seen this coming.

All right, lets start with the obvious: The Bachelor isnt real.

Now, PERSONALLY, I believe love can be born out of any circumstance, and The Bachelor is no exception (#sorryNOTATALLsorry).

However, the rational side of my brain knows that producers plan dates that involvea perfect combination of adrenalineand aggressive romanceso as to trigger feelings of love, much likea sixth grader mixes baking soda with liquid detergent in a paper mache volcano to produce an explosion atascience fair.

So the fact that Ben and Laurenwere a match made on The Bachelor means they werea farce, pretty much, Trombetti says.

Shefelt it was obvious that the two werent ready for marriage. (Ben, in particular, openly wasnt.) But the producers rushed them, just to nail that TV engagement.

The Bachelor franchise is a show for ratings as we all know. We like to believe love is that easy to come by,but it isnt. [The Bachelor]doesnt spawn marriages made in heaven, but more romance in a utopian dating situation, she says.

2. Ben told JoJo he loved her.

It is totallyunprecedented for any Bachelor to say I love you totwo women.But as we all know, Benbroke that sacred unsaid rule.

Conti calls thisthe detrimental mistake and believesLauren was rightfullyjustified in her struggle toget over it. Beginning a relationship with a man being in love with two women is tough; having the whole world know about it is nearly impossible, shesays.

Lauren even held onto herresentment during the After the Final Rose episode of JoJos season, when she and Ben were asked to make an appearance. You see Laurens angervery clearly in the premiere of Happily Ever After?:

Conti believes Ben and Laurens decision to do another reality show (Happy Ever After?) was the kiss of death. Ben and Lauren as a couple were so new, they had not even technically been exclusive before they were engaged; he was also casually dating 25 other women, she says.

The strongest couples that I have seen have been couples who had forged their own identities independently of one another.

When they merged, they had already experienced the growing pains that fame can bring, so they were much more resilient to the tabloids and scrutiny that any public couple faces.

Trombetti saysLauren and Ben did lastlonger than a lot of other Bachelor couples, but she agrees that fame definitely hurt them. They seem like great people who really could have made it, but then the celebrity life under a microscope following their relationship everywhere intervenes on top of it, she says.

As clich as it sounds, fame does genuinely change everyone that it graces, Conti says.

Before The Bachelor, Lauren was a flight attendant, which made her attractive, says Conti.She traveled the world, saw different countries and had a variety of experiences that she could share with Ben.

But once she got engaged, she stopped being a flight attendant and changedher whole life, not only to move to Colorado to live withBen, but to revolve her world aroundhim.

Her image became dependent on her relationship with Ben, Conti says. She was now an influencer, she could focus on social media and public appearances to make her money, but the problem with this is that her work became her love life.

Not all of Laurens Instagram postsincluded a reference toBen, but she definitely mentionedhim ina lot of her posts, Conti says. She needed to sprinkle anecdotes alluding to Ben.

5. Their social media posts about each other were dwindling.

If you look at both of theirInstagrams, there arent many recentpictures of the two of them as a couple, which isa warning sign to Trombetti. They havent posted on social media for a bit about each other, shesays.

Laurens lastpicture of her and Ben is fromMarch 30 (with a random one of him in a group shot thrown in, with a caption FamilyApril 16that he ISNT EVEN TAGGED IN), and Bens last picture of him and Lauren is fromApril16 (with a solo shot of her holding a baby that he posted on April 25, just to keep us GUESSING).

Now, this is NOTto say that posting photos on Instagram is indicative of the success of a relationship for a regular person like you and me. But when the success of your relationship isyour moneymaker, its pretty telling when, all of a sudden, youjust stop obsessing over each other on social media.

Everyone who watched Happily Ever After?, including myself, knew something strangewas going on between them, and Conti agrees.

Watching the series was painful because of their dynamic. Even when they simply were grocery shopping, Lauren would belittle Ben, telling him that he was embarrassing her when he got a little goofy in the store.

If a couple cannot embrace different elements of each others personalities, it will inevitably cause resentment.

Honestly, the entire show wasjust scene after scene of Lauren acting really weirded out by anythingBen said and did. Shehardly ever thoughthis anticswere funny and experts saysharing a sense of humor is the number onemost importantthing to a lasting relationship.

Ben seems a little vanilla. Tinder chicks would chew him up and spit him out, Trombetti says.

Yeah, Ben wasnt exactly known for being the most interesting Bachelor out there. New York MagazinesVulture nicknamed Ben Oatmealand continued to call him that in each of their reviews. And people on Twitter constantly talked abouthow boring hewas.

Oh, now Bachelor Ben does not want to get married. He’s been a boring tool from the beginning, why would that change now? #BachelorSucks

@KateCasey @WonderyMedia loved this episode and all the bachelor talk. Agree that Ben is SO boring Lol

@LaurenBushnell3 @benhiggi I thought Ben was boring on bachelor. You both need to start having fun. Life doesn’t need to be so serious.

Who knows if Ben could even have dreamed up some of these romance-filled dates on his own, much less if he could have sustained this level of romance on the show? That in itself must make it hard to transition to a couple.

OK, thiswasnt necessarilyfault. Producers were choosing dates that NO Bachelor could have evercome up with. But, still. Bens attempts at romance without ABCshelpdeeeeefinitelyfell flat. Wheres Chris Harrison when youACTUALLY need him?

Bachelor in Paradise, anyone?

Dietician Shows How The Same Meal Can Have 400+ Calorie Difference And We All...