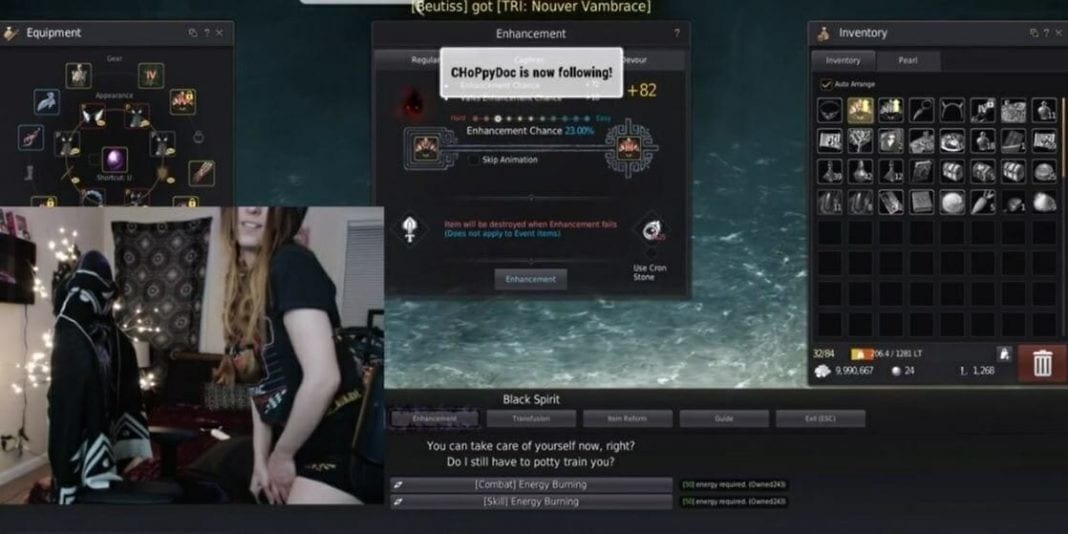 A Twitch streamer has gone viral by using her cellphone in a NSFW fashion and for then dropping a racial slur. But she told the Daily Dot that’s not the reason she was banned for 24 hours—and she expressed remorse for the way she handled her live stream.

A streamer named AriLove broadcast herself Sunday placing her cellphone on vibrate mode and sticking it down her shorts while dancing to Khia’s “My Neck, My Back.” She also used the N-word while repeating a lyric in a clip that’s been viewed more than 150,000 times. In the NSFW clip, she immediately realized her mistake, saying while laughing, “Oh my God, I didn’t mean that. Please don’t ban me.”

But she wasn’t punished for the hate speech, according to screengrabs reviewed by the Daily Dot and provided by AriLove. Instead, Twitch banished her for the day for “wearing sexually suggestive attire, such as undergarments or intimate apparel.” AriLove thinks it’s because you could see the top part of her underwear when she placed her phone inside her shorts. Twitch has repeatedly told the Daily Dot that it doesn’t comment on individual user bans.

As for using the N-word in her stream, AriLove said that she wasn’t using “the hard R” and that it came out while singing rap lyrics. “It was never my intent to be racist,” she said. “Rap is one of my favorite genres of music, and I listen to it frequently, both on and off stream.”

While she shouldn’t have used a racial slur in any context, this is just the latest example of Twitch’s arbitrary policing of how women behave and dress.

On Twitter, AriLove didn’t seem all that upset about her brief banishment. She wrote, “600 viewers and twitch bans me for 24 hours someone hold me I’m hurting.”

But in her message to the Daily Dot, she wrote that she had taken some time to re-evaluate “where my spot is on Twitch” and to figure out how she’ll handle herself in the future. “As I’ve grown older, I have grown to be a little more introverted and use drinking as a means of opening up,” she said. “Obviously, things went a little too far that night. I agree [with Twitch] that fault falls on my shoulders for what occurred on that night, and ultimately, I am responsible for making things right and correcting the situation.”

AriLove—who has about 1,000 followers—is a gamer who plays Overwatch, Apex Legends, and Black Desert Online, and on her Twitch page, she wrote she’s “just tryna’ keep it real and have a good time while doing what I love.” She’s also not the first female Twitch streamer to be banned for NSFW content in recent weeks.

SweetSaltyPeach has been banned twice—once for  while sitting on a couch and once for baking in see-through shorts—and a three-day Twitch punishment for showing too much skin while adjusting her sitting position. In January,  for taking off her top after she mistakenly thought she had turned off her broadcast.

Twitch has been quick to suspend female streamers for nudity (accidental or otherwise) or for other NSFW content. Men often complain that women get lighter punishments when it comes to NSFW violations; some female streamers, though, have been forthcoming about those who watch their streams simply to try to catch and report them for violating Twitch’s Terms of Service (TOS).

As Bad Bunny said on Twitter earlier this month, “Yeah, it’s really sad. Only one person in my community watching at the time noticed a potential TOS moment. Everyone else noticed nothing. These reporting weirdos really live for these moments.”

AriLove said about 600 people were watching her stream at the time of the incident at about 1am and that multiple viewers reported her. “My true intent was to make people laugh,” she said. “It wasn’t even apparent to me the majority of people watching me were just waiting to clip and report me [the] first chance they got.”

A mom is going viral for her thoughtful response to her kid using curse...