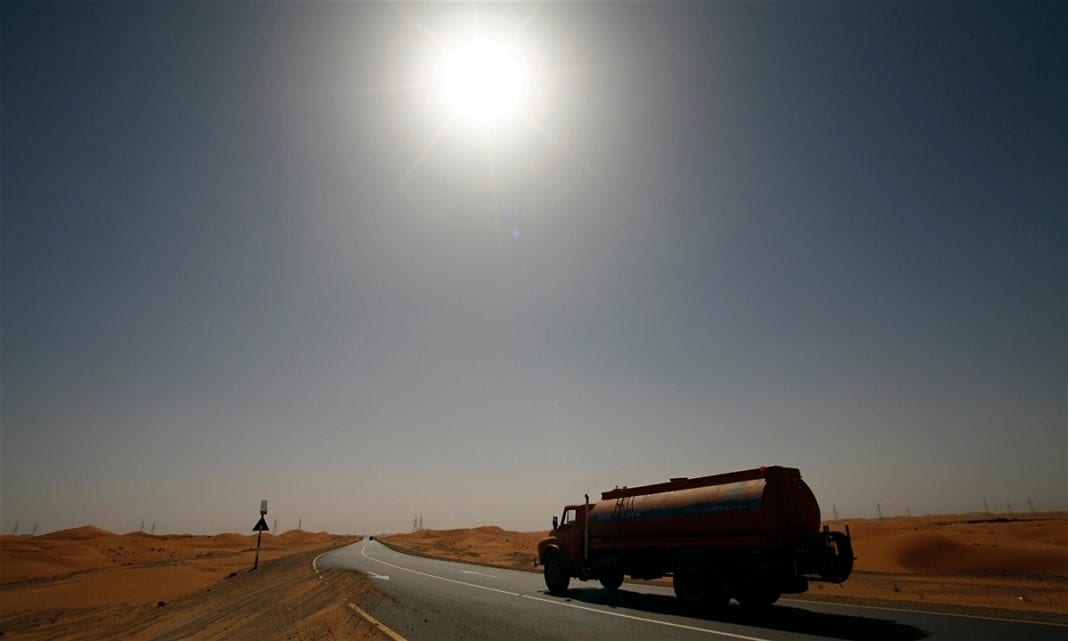 Oil heartlands of Abu Dhabi, Dubai, Doha and Irans coast will experience higher temperatures and humidity than ever before on Earth if the world fails to cut carbon emissions 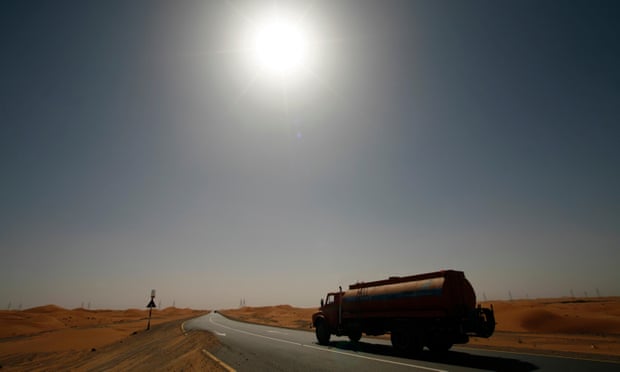 The Gulf in the Middle East, the heartland of the global oil industry, will suffer heatwaves beyond the limit of human survival if climate change is unchecked, according to a new scientific study.

The extreme heatwaves will affect Abu Dhabi, Dubai, Doha and coastal cities in Iran as well as posing a deadly threat to millions of Hajj pilgrims in Saudi Arabia, when the religious festival falls in the summer. The study shows the extreme heatwaves, more intense than anything ever experienced on Earth, would kick in after 2070 and that the hottest days of today would by then be a near-daily occurrence.

Our results expose a specific regional hotspot where climate change, in the absence of significant [carbon cuts], is likely to severely impact human habitability in the future, said Prof Jeremy Pal and Prof Elfatih Eltahir, both at the Massachusetts Institute of Technology, writing in the journal Nature Climate Change.

They said the future climate for many locations in the Gulf would be like todays extreme climate in the desert of Northern Afar, on the African side of the Red Sea, where there are no permanent human settlements at all. But the research also showed that cutting greenhouse gas emissions now could avoid this fate.

Oil and gas rich nations in the region, particularly Saudi Arabia, have frequently tried to frustrate international climate change negotiations. The Gulf, where populations are rising quickly, was hit in 2015 by one of its worst-ever heatwaves, where temperatures topped 50C (122F) and led to a significant number of deaths.

Prof Eltahir said: We would hope that information like this would be helpful in making sure there is interest [in cutting carbon emissions] for the countries in the region. They have a vital interest in supporting measures that would help reduce the concentration of CO2 in the future.

The new research examined how a combined measure of temperature and humidity, called wet bulb temperature (WBT), would increase if carbon emissions continue on current trends and the world warms by 4C this century.

At WBTs above 35C, the high heat and humidity make it physically impossible for even the fittest human body to cool itself by sweating, with fatal consequences after six hours. For less fit people, the fatal WBT is below 35C. A WBT temperature of 35C the combination of 46C heat and 50% humidity was almost reached in Bandar Mahshahr in Iran in July 2015.

The scientists used standard climate computer models to show that the fatal WBT extremes would occur every decade or two after 2070 along most of the Gulf coast, if global warming is not curbed. Using the normal measure of temperature, the study shows 45C would become the usual summer maximum in Gulf cities, with 60C being seen in places like Kuwait City in some years.

Near the Red Sea coast of Saudi Arabia, where Mecca and Jeddah lie, the WBT is not projected to pass the fatal 35C level, but would be 32C or 33C. This would make the Hajj extremely hazardous, said the scientists. One of the rituals of Hajj the day of Arafah involves worshipping at the site outside Mecca from sunrise to sunset. In these kind of conditions, it would be very hard to have outside rituals, said Eltahir.

Air conditioning might be able to protect people indoors and those in wealthy Gulf oil states might be able to afford it, said the scientists, but less wealthy nations would suffer. In Yemen, for example, the WBT would reach 33C. Under such conditions, climate change would possibly lead to premature death of the weakest namely children and the elderly, they said.

However, global action to cut carbon emissions would mean the fatal WBT would not be passed and that temperatures in Saudi Arabia would experience much smaller rises. The [Gulf] countries stand to gain considerable benefits by supporting the global efforts to cut emissions, said the scientists.

The consequences of major heatwaves for human health has become apparent from the death toll of recent events such as those in Chicago in 1995, Europe in 2003 [30,000 deaths] and Russia in 2010 [50,000 deaths], said climate scientist Prof Christoph SchÃ¤r, at ETH Zurich, Switzerland and who was not involved in the study. But he said the new study concerns another category of heat waves one that may be fatal to everybody affected, even young and fit individuals under shaded and well-ventilated outdoor conditions.

SchÃ¤r said the work showed the threat to human health from climate change may be much more severe, and occur much earlier, than previously thought. It also indicates that reducing global greenhouse gas emissions and adaptation efforts are essential for the inhabitants of the Gulf and Red Sea regions.

The Gulf is vulnerable to very high WBT because regional weather patterns mean it has clear summer skies, allowing the sun to strongly warm the waters of the Gulf, which are shallow and therefore heat up more than deeper oceans. This heating of the sea also produces high humidity, meaning cities near the coast are most affected.

Growing up in Dubai in the Gulf, the thing I looked forward to the most every summer was leaving.

Summer meant going back to my birthplace in Alexandria in Egypt, but it also meant getting away from temperatures that could hit a hellish 50C, when going to the beach wasnt an option, unless you enjoyed scorching your soles in the sand to swim in tepid seawater while burning your skin in the blazing sun.

Summer is something you work around in the Gulf. You try to ensure your time spent outside is kept to a minimum because the high humidity of seaside cities, such as Dubai, will leave your clothes soaking wet within minutes. It means an intricate hop from air-conditioned site to air-conditioned site your apartment to your car to the supermarket or the shopping mall or a friends similarly temperature-controlled abode. It means never having to use a water heater because your shower will always be hot even scaldingly so if you dare to take one at midday.

Now that the holy month of Ramadan falls in the summer, whenever Im back visiting family I try to keep daytime waking hours, when I have to abstain from drinking water, to a bare minimum. Ive completed the hajj and the lesser pilgrimage, the umra the former in the cool February climate and the latter in the heat of summer. I cannot imagine handling the crush of millions of pilgrims marching around the kaaba in the Grand Mosque during a heatwave.

The summer can be insufferable in other places in the region for different reasons. While this year it was relatively mild in Beirut, where I live now, for example, it is always accompanied by water shortages and extended power cuts for days on end, leaving you with little choice but to pay for an expensive generator subscription to preserve perishables such as meat or dairy for more than a day, or sleeping on the ceramic tiles to cool off. This year it was also accompanied by piles of rotting trash baking in the sun after the governments chronic failures were extended to garbage collection.

This isnt a problem in the Gulf, where save for a freak power cut the constant electricity supply maintains a climate-controlled habitat. I was a bit incredulous when Qatar was awarded the World Cup hosting rights I hadnt been able to play football outside of an air-conditioned indoor pitch in the summer since God knows how long.
Kareem Shaheen in Beirut

The True Danger Of Hurricane Season Is Much More Long-Term

Pinterest is the best thing to happen to my marriage