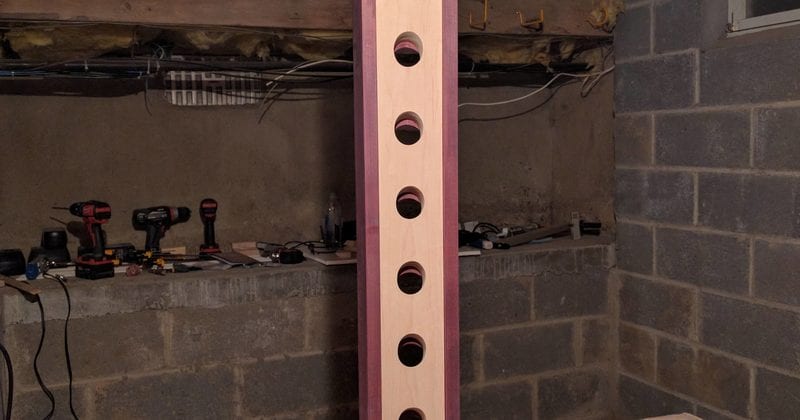 I don’t know about you, but when I go on a decorating spree in my house, it usually ends up way more cluttered than before.

Buying new furnishings at the store is really fun, but when I get home, I realize that I don’t actually have the space for them. So at that point, it’s either time to take them back or find a way to squeeze everything in, which ends up looking not so great. That’s why I love this guy’s genius creation, because it saves space!

Redditor tl34tf must have had the same issues as I do, because he built some awesome riddling racks to hang on the wall — and not only do they hold wine elegantly, but they’re also clutter-free!

Because the crafter loved its grain, he chose maple for the rack.

He started by cutting a few planks into smaller pieces for the frame. Then, he set aside four of the sections that would later attach the racks to the wall.

After clamping each rack face down, he began drilling the holes for the wine.

He put everything together to test the fit — it was perfect!

The holes were rough, so he used barrel sanders to smooth them out. After that was done, he screwed and glued the frames together.

To store all the wine bottles at the same angle, he sanded curves into each support bar.

Time for some color! He painted the frames with three coats of purple wood dye.

When the racks were dry, he attached the faces and supports with screws and glue.

When the glue dried, the only other thing they needed was a few coats of clear polyurethane finish.

How gorgeous are these?

He can even add bottles to the top for extra storage!

I need these for my house right now.

Like what you see? Find all of the instructions right here so you can replicate these for your own home. Cheers!

Sink Your Teeth Into These Incredible Edible Christmas Gifts